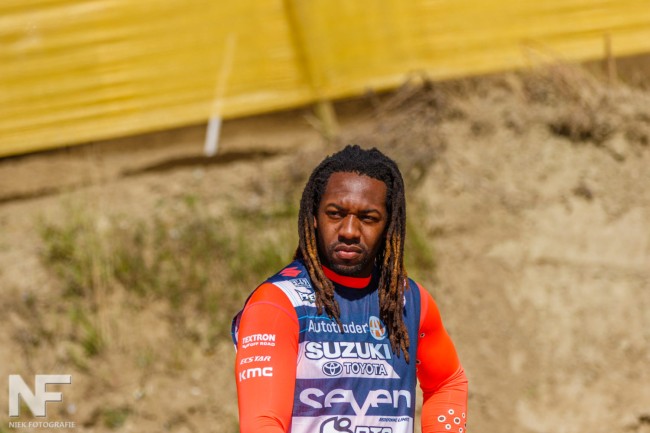 The last round of the Dutch Masters took place at the Zwarte Cross festival and Malcolm Stewart came over to compete against the Dutch riders and some GP riders.

As the Zwarte Cross is such a big event having a festival and a motocross race, it was a good opportunity for the American to come over, have some fun and still compete at a high level.

We caught up with Malcolm to discuss Holland, the Zwarte Cross festival and a number of topics.

Gatedrop: Malcolm, we are over here in Holland, how have your first few days been?

Malcolm Stewart: This is unbelievable. I’ve never seen so many people in a field like this just get tore up (laughs). It’s cool to be here, the thought process and the work that has went into it is great. The stages, the artists, when they say it’s a music festival, they aren’t lying! It’s a serious music festival. But it’s cool man, everybody has been really nice here and they don’t treat me any different – I like that.

Gatedrop: When did you first get to Holland and did you get any practice in before the event?

Malcolm Stewart: No, we’ve been struggling on jetlag since we got here. There’s like a 6 or 7 hours difference – 9 in California. It’s tough but I trust the bike anyways, this team has actually been amazing. They set everything up and today is the first day we rode it.

Gatedrop: What’s the bike like? Did you bring any of your bits over from America?

Malcolm Stewart: It’s a stock bike. That’s just typically how you do it when you come over, like when we do Bercy and stuff. You can bring your suspension and things like that but most of the time its stock. We are riding a stock bike but we are here for fun, we aren’t here to try and compete with the championship because the championship is over with.

Gatedrop: The track isn’t a typical Dutch track as they’re usually a lot rougher. What your thoughts on the track?

Malcolm Stewart: I mean it’s more sketchy than anything. The sand parts not that bad but out the back is a little dusty. Other than that you can’t complain man when you come here and have a great opportunity so I’m just happy to be here.

Gatedrop: How did the opportunity come about for you to do the event?

Malcolm Stewart: One of the main guys from the Zwarte Cross called me, sent me a video and said this is what we do. I said “sure, I’m in”!

Gatedrop: You’ve been over in Europe a few times, I remember you were at the Ottobiano GP last year. What’s your thoughts on the World Championship?

Malcolm Stewart: Yeah, Ottobiano was cool.  That was the first GP I’d ever been too, it’s cool. I think it’s amazing, some of the riders, you always hear about them but you never get to see them so it was nice to finally get to see them in person. It’s funny because you have so many riders, like Thomas Covington, we grew up together. Max Anstie, I remember racing him in the Amateurs and I even raced Febvre too whenever he does Bercy and stuff. It’s cool to see all the riders, it’s almost like a long-lost family that you never get to see. We all have respect for each other and I like it.

Gatedrop: Would you consider coming back over again next year to do a few more races if you get the opportunity?

Malcolm Stewart: Yeah, without a doubt as long as it doesn’t conflict with anything I got in the US sponsor wise or anything I’m definitely down to do it.

Gatedrop: How would you describe Holland? It’s a bit different to America?

Malcolm Stewart: It’s a little different. I don’t know, you guys have villages and stuff, we call them towns! Other than that, it’s not bad. I mean I’m enjoying it so far, the people over here in the Netherlands, they can drink man! Gosh, jeeze, they know what beer is like.

Gatedrop: In a recent interview we done with you, you said you’d like to race the Motocross Des Nations, has there been any development with that? I guess Puerto Rico could be an option.

Malcolm Stewart: I think Puerto Rico has been took, someone has already taken that. We were in the works of trying to do it but it didn’t work. I’m just going to sit back and wait for next year.

Gatedrop: Just on next year, you have any plans yet?

Malcolm Stewart: I’m not sure yet, I have to wait and see and we’ll go from there. We’ll be landing on something soon.

Gatedrop: You like your Supercross, do you see yourself focusing on it again or maybe doing the Nationals too?

Malcolm Stewart: I wanted to do outdoors this year, it just didn’t work out. I haven’t raced outdoors in four years so I think that’s too long. It was nice to come out here and see it. It was rougher for me because I’m not used too it but it’s always good to come and ride with new riders, new environment and everything.

Gatedrop: After this event are you going to stuck around for a while or you straight back home to America?

Malcolm Stewart: Actually we are going to Italy after this. We got to do a Supercross race next weekend in Italy so we don’t leave until Monday night. We are going to go check out Amsterdam, I’ve never actually visited it, I’ve flown in but I got picked up there then we left. It was pretty quick but it was more important to come here and do this, that’s number one priority. When we get done maybe on Sunday or Monday morning we’ll come check out, take some pictures of Amsterdam so I can officially say I’ve been there and maybe get a souvenir or something, it’ll be cool.