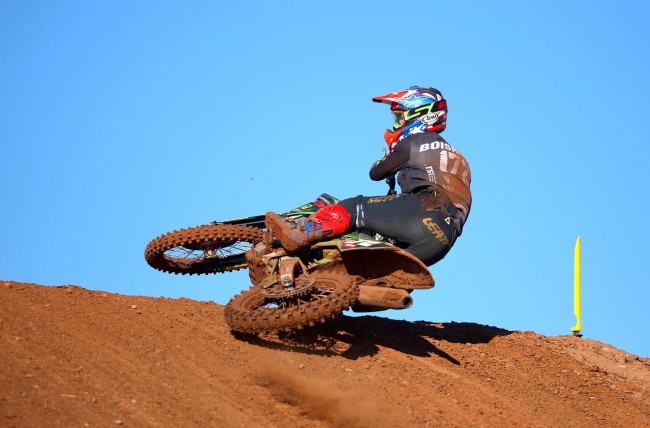 It was an impressive year for Mathys Boisrame as a rookie in the MX2 World Championship. The French rider moved up to the class after clinching the EMX250 title in 2018 on his Assomotor Honda – a great season for the French talent.

Boisrame ended up ninth in his rookie season in the MX2 World Championship which isn’t bad at all but bigger and better things could be around the corner.

The French talent has signed with the F&H Racing team for the season ahead which sees him making the switch to Kawasaki and work with Marc de Reuver.

We caught up with Boisrame to get his thoughts on the move and much more.

Gatedrop: Mathys, Let’s start with the day you won the EMX250 championship. Just how special was that day for you and how did it feel to become a European champion?

Boisramé: It was in Bulgaria and it was magic, nobody was waiting for the title before the last race. I was happy for the team because the first round I was ranked 18th in the championship, I never imagined I’d end up Champion. It’s nice reward for me and my family. My mechanic has been good too… and I thank Andre for doing a good job with the engine and Francesco for his help and all the staff.

Gatedrop: On the 125cc you did post some good results but you were never really seen as a top top talent. When you got on the 250cc you really improved. Looking at your build though you suit the 250cc much better. Was it frustrating racing the 125cc as you were too heavy for the bike and couldn’t show your full potential?

Boisramé: I never did a high level competition before the 125cc and my first year was difficult. I had to find my bearings at these international races. It is certain that the weight is a disadvantage and I was immediately more comfortable on the 250cc; my memory for the first year is the race at St Jean d’Angély, I passed Jorge Prado and after my bike broke, it was a disappointment.

Gatedrop:  Last year was your rookie MX2 World Championship season and you finished ninth in the series, as a rookie that’s a great first season. How would you reflect on your 2019 season?

Boisramé: For me it was a mixed season, I didn’t have the same bike that I had in 2018, and we never found the best settings for me. To finish 9th place it’s a good place in the championship.

Gatedrop: I was at Germany, a very special day for you getting on the podium. Can you talk me though that weekend and how it felt to get your first World Championship podium? I’m sure it’s something you’ll never forget.

Boisramé: It was strange because no one thought we would be on the podium. For the story, I was with my mother and for once, we had the return flight on Sunday night and it was a sprint to get our plane. My dad could not be present because of his work and had to watch on the TV with fans, it was a crazy moment. The team also had a plane in the late afternoon and I saw them arrive running for the podium.

Gatedrop: For 2020, you’ve signed with the F&H Kawasaki team. When did talks start with the team and how did the deal all come about?

Boisramé: All begining with Marc De Reuver, the first contact was in 2018. In 2019, I had several proposals. Marc showed his interest in me and then he made contact with me again in June. We exchanged and my decision was made in July.

Gatedrop: You’ve now had a few days on the green machine. What’s your first thoughts on the Kawasaki?

Boisramé: I really like this bike; the team did an amazing job getting this bike. It’s me who must change and adapt because some things change for my riding but I will work.

Gatedrop: You’ve had your first few days working with Marc de Reuver as well. So far how is it working with him? He’s supposed to be a lot of fun but serious at the track!

Boisramé: That’s it exactly. Marc is serious at the track, and I like this. It’s very important to have his character and off the track he jokes.

Gatedrop: The one area you need to improve in the sand, is that where you’ll spend your winter (at sand tracks)? Also, having Van de Moosdijk and Haarup as team mates who are sand specialists, that should only help you!

Boisramé: Oh yes, the sand is not favourite type of track but I will progress, It’s about being with Roan and Mikkel, it will help me become better in the sand.

Gatedrop: Where will you be based for the 2020 season and was it a difficult decision to leave France?

Boisramé: It was a moment that I considered it because for me it was difficult to manage a routine, my parents did everything for me but they work. The F&H structure offers all of what a rider needs. In addition, I have an incredible chance that Lucas my mechanic who was with me at Assomotor followed me with Bruna (his wife) and I thank them. The distance with my family is not easy but they have just been with me and I will return to the for 15 days over Christmas.

Gatedrop: For the season ahead what’s your goals for the 2020 season?

Boisramé: I thank my family, my friends, my team F & H Kawasaki and Harry Fasé for his welcome. My mechanic Lucas and his wife. A Merry Christmas to everyone!