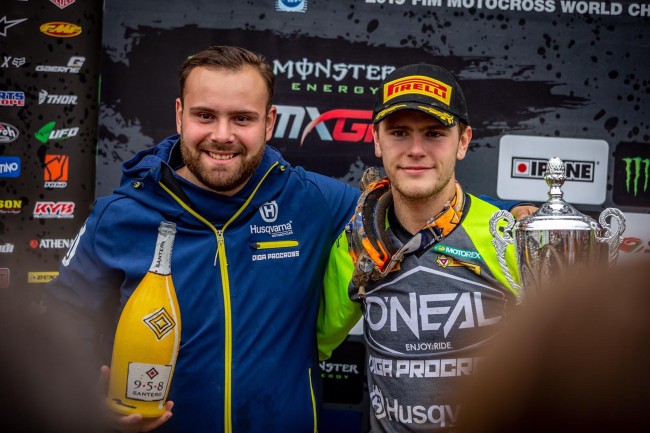 It was announced last week that the DIGA-Procross team will make the switch from Husqvarna to become the Factory GasGas team to take on the MX2 World Championship in 2020.

The team will keep the talented, Jeremy Sydow and have also announced the signing of Simon Längenfelder who will make the jump up from the EMX125 class to the MX2 World Championship. The team has a very bright future as both riders have a lot of potential.

Team manager, Justin Amian is only twenty-five years old but after five years in the paddock has the opportunity to run a factory team.

We caught up with Amian to discuss the switch to GasGas and much more.

Gatedrop: Justin, it’s just been announced that the DIGA-Procross team will make the switch to GasGas, just how did this all come about and happen?

Amian: I believe that the successful relationship we had between DIGA Procross and Husqvarna Motorcycles has paid off. I was always working hard to be part of one of the Austrian Motorcycle brands. I have the right attitude, age, and power to build up this handsome project. I’m hungry for success and I have the right German mentality to work hard, be smart and structured.

Gatedrop: I’m assuming someone from KTM made contact with you regarding the GasGas situation, at first did you believe it? When I first heard the news it took a few days for the news to sink in..

Amian: After Robert Jonas contacted me and explained to me the opportunity, I needed a few days to think about it and to realize what a big chance this is for my team. But I felt ready to start this new project and grab this chance for the team.

Gatedrop: You’ll be the Factory GasGas team in MX2, just how does that feel – a dream come true to be a factory team? It’s pretty impressive that you’re one of the youngest team managers in the paddock too!

Amian: Yes, I am only 25 years old and I think one of the youngest team owners and managers. Being young is sometimes double hard because, unlike managers who are older and have been in the business for a long time, I do not just have to convince with my work but also have to build the trust of investing in someone young with a big project. But I like doing that and like to work hard for the respect.  To run a Factory Team was always a dream for me and this came true. Now, we have to work hard and perform, until now it was just the warm up.

Gatedrop: In your short time as team manager, what sort of things have you learnt the most from?

Amian: The Motocross world is no joke, it is a hard business! Nobody cares about, how long and hard you work during the pre-season or during the season. Nobody wants to hear a story. Everything that counts are the results at the races.
In being 5 years a professional motocross manager, I grow already in my brain by 15 years! I’ve learned a lot and want to thank everybody who helped me out in this time.

Gatedrop: Jeremy Sydow stays with the team but moves up to the MX2 World Championship. The German was impressive when he made his return to racing this year – what do you expect from him in MX2?

Amian: To be continuous is the key of success. The plan for his first year with me was to keep him on the bike without any crashes, it’s hard to adjust the old mistakes from the past, but he did it great. This year I didn’t care about the results, but I worked together with my crew on the development of Jeremy. Development and hard training is the other key; this is the part what you can’t see and is our secret. Jeremy did a great job last year AND he earned my trust and respect!

Gatedrop: Young Simon Längenfelder has signed for the team. He was so impressive at the Motocross Des Nations on his first big race on the 250cc, was it based on that race you tried to sign him?

Amian: To be honest, I wasn’t following his results or speed so much, I focused more on how he acts on the bike. This was for me more of interest. Sure, the results were great last season but I still see things to improve during the winter.
Potential? – YES!
I believe with two German talents in a German team it is a special situation but I think it can become something really special. To put the power of your country together is always good and for me at this moment, it’s the right and best way to go.

Gatedrop: Was there ever any debate on what series for him to race? The natural progression from EMX125 is the EMX250 class, was that ever on the table or are you convinced of his speed that he’ll impress in MX2?

Amian: You can see both ways positive and negative. I believe you can see Simon be very consistent in the MX2 class next year.

Gatedrop: What’s your expectations for Längenfelder in 2020?

Amian: We have made a clear plan and we want to go step by step. I expect a continuing development on every point. We will give Simon all the tools to make this happen.

Gatedrop: I heard the team might only run Sydow for MX2 in 2020 and no other rider – how close was that to happening?

Amian: Plans can change fast, then you have developed them. At one day, after one call your plans can change. Are we ready to go or not?  Yes I am!

Gatedrop: Has it been tough putting a budget together to complete for full MX2 World Championship in 2020 and would this even be happening without Gas Gas involvement?

Amian: With GasGas or without GasGas, there were two different ways to go. You can’t compare these two situations and the budget. GasGas supports the team as much as possible. Imagine, until today there isn’t one GasGas bike sold to the customer, but they made it happen to get the budget to support two Factory Teams.

Amian: In my opinion, the World championship is in the whole world and not only in Europe. There are many great tracks and facilities all over the world, so its nice to visit those places. Oversea races are for me are always like an experience trip. I have to say, that not only Europe has standards in 2019, other countries out of Europe too.