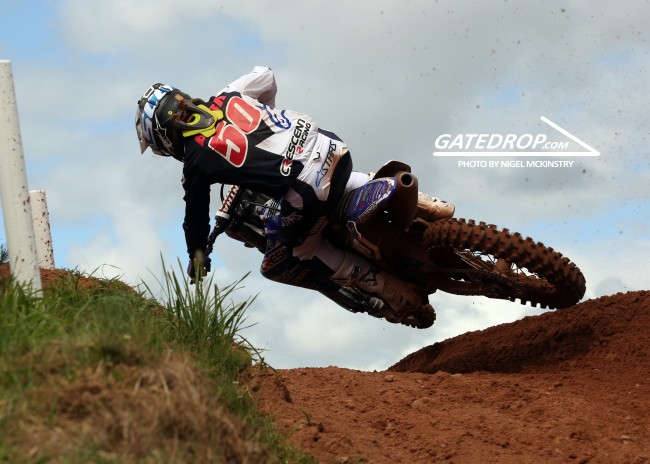 Martin Barr isn’t getting any younger but he still knows how to ride a bike! The Irish rider has a smaller setup in the paddock this year with the Crescent Yamaha outfit but with a smaller budget he’s doing a marvelous job.

We caught up with Barr to discuss his home round of the series and much more.

Gatedrop: Martin, I feel like your speed was good today here at Desertmartin but it’s a shame not to see you on the podium in front of your home crowd..

Martin Barr: It wasn’t too bad a day. Qualifying started off decent, I got fifth and it didn’t feel like I got a good lap in, I wasn’t far away but I wasn’t too bothered because I still had quite a good gate pick.

In race one I made a decent enough start but at mid distance, before I got into third I lost my rear break. I managed to get into third and tried to go with Alvin (Ostlund) but I made a few mistakes because I couldn’t make the corners and was over shooting them. I just had to use my head and bring it home for third which was a little bit frustrating but it was still a decent result.

Race two, got a crap start and made it hard work for myself. By the time I got myself in fourth the front three were already gone. It’s disappointing not to make the podium. I’m still chasing one this year and it would have been nice to do it at my home race at Desertmartin but fourth overall and I’ve moved up a bit in the championship. It’s one of those days, a podium would be nice but I can’t complain too much.

My Crescent Yamaha has been working fantastic, my dad has it working absolutely brilliant. Being the oldest in the class we are still punching it up in there. With the budget we’ve got, we haven’t got the budget them boys have got to spend on their bikes and that. We are doing the best job we can but we will keep working and we know a podium isn’t far away so we will keep doing our thing. Hopefully one will come before the end of the year.

Gatedrop: As you said you got a bad start in the second moto. How important would you say a good start is in MX2 this year? Last year it I don’t think it was as fast at the start but this year you have more MX2 GP riders with Vaessen, Walsh, Ostlund.

Martin Barr: It’s very important. The MX2 class is absolutely stacked this year. You have to be in the top five to have a chance. The first three or four laps is so important to try and go with everybody. If you don’t get a start like what happened me in the second one, those first three or four laps you have to get a charge on because there’s already a gap at the front.

Those guys are riding really good, doing the GP’s week in, week out is bringing their pace along a little bit. Bas (Vaessen) the last couple of weekends in Latvia, Germany has been inside the top five, top six overall. It just shows you the pace them guys are running but I am pretty happy with how things are going. With what we’ve got package wise compared to them guys, it’s a million miles away but we aren’t that far away in comparison. I’ll keep working and keep twisting the throttle. Hopefully we can finish the season off strong.

Gatedrop: I remember in another interview we’ve done with you that you said the track here didn’t get that rough for the British last year. At the Ulster championship earlier in the year it got mega rough but how did you find it today? You probably wanted it rougher.

Martin Barr: Yeah, 100%. Last year it was very very fast but Billy (McKeown) and his crew have done an awesome job putting lots of sand on. For roughness, Easter Monday for the Ulster was a lot rougher but there was a lot more racing on the day. The track was short so you’re doing more laps whereas today there’s only six races in total and we are doing the extra section out the back.   It just didn’t get as rough but it wasn’t too bad, that last race was getting there. It was technical and there was a good few lines and stuff. It’s definitely a lot better and very enjoyable.

Gatedrop: Last year you were racing the EMX250 series which was a new challenge for you whereas this year you’re just doing the British, MX Nationals and even the Ulster Championships. Motivation wise is there still plenty of fire in the belly yet?

Martin Barr: Oh yeah, 100%. I wouldn’t be doing it if there wasn’t fire in the belly. It’s as simple as that, I don’t want to go out there and just make up numbers. I still feel that I can run up front which we are doing. As I was saying them guys racing GP’s week in week out, they will get stronger and that’s the hard part for us.  We just have to keep working and keep at it. The motivation is still there and I feel like there’s a good few years left in me yet.

Gatedrop:  It was a good day for the local riders at Desertmartin and looking ahead to the MXDN, there’s no reason why Ireland can’t be competitive. Is that an event you’re looking forward too at Assen?

Martin Barr: Obviously, the team isn’t picked yet but I know I’m in the mix. The team manager, Philip McCullough put a statement up there during the week and it’s really good to be in there. I never take it for granted that I am going to be on the team. Assen is a fantastic track, I’m lucky enough that I’ve rode there, for anyone that hasn’t it’s going to be difficult. It’s not your normal sand track, it’s man made, it’s a weird track to go too.

As you were saying, everybody is riding very good. Jason (Meara) has stepped it up and riding that big bike very well. Glenn (McCormick) is riding very well, Jake Sheridan, Stuart (Edmonds) is still going, Luke Smith. Everybody, there’s still a lot of names there and it’s still a long time away. In Motocross anything can happen yet but if I make the team I will be stoked like I am every year. It would definitely be nice to make my fifteenth consecutive Motocross Des Nations for team Ireland but like I said, I don’t take it for granted. I keep going away and putting the hard work in to put my name in the mix, hopefully I will be there.

Gatedrop: If you got asked to ride an MX1 450cc Yamaha for the event is that something you’d consider?

Martin Barr: I don’t think so. Not at the minute because we obviously have races every weekend leading up to the event. I only have one 450cc so I can’t really go and nick my team mate’s when he’s going to be racing it week in week out. To go and do it you need to have 100% preparation and I don’t think I’d have that preparation on a 450cc like I’m doing on the 250cc.  I’m not ruling it out, we will just have to wait and see. My first obvious choice is in MX2 but we will have to wait and see what Philip decides.

Gatedrop: You’re leading the Ulster MX2 Championship, do you know yet if you will race the rest of the rounds? The local fans would love to see that!

Martin Barr: Yeah, I would like to do it. The next round is Saturday and we have an MX National on the Sunday. With the logistics of it, I’d need to get someone to leave on Friday with my van and race bikes then I’d fly over on Saturday night. For Crescent Yamaha and Yamaha UK, the main goal is British Championship, MX Nationals and Bridgestone Masters. They don’t look at the likes of an Ulster Championship but for me, I’d love to do it to be able to come back and race in front of the home crowd. They’ve really supported me this year and it’s been fantastic. I’ve only ever won one Ulster Championship which was the first year in the adults in 2005. I won the Ulster MX1 Championship. I’m not ruling it out but we will have to see closer to the time and just take it from there.