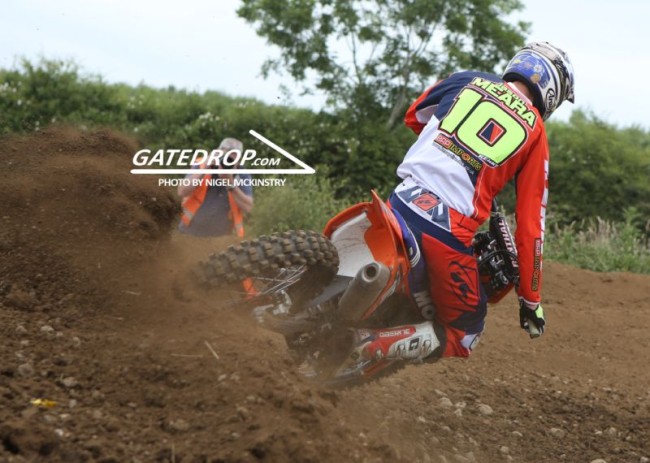 Jason Meara had one of the races of his life at Desertmartin, taking a career best third place finish in the first MX1 British championship moto after being cheered on around the circuit by the home crowd.

But given the back-drop of a badly broken wrist that threatened to ruin his career, as well as it being his first year on a 450, the Norman Watt Kawasaki rider’s achievement is all that more impressive.

Unfortunately a failed noise test in the second moto cost Meara a likely fifth overall but that first moto will be one he will never forget.

We caught up with a delighted Meara at the end of the day to get his thoughts on a superb performance.

Let’s start with that third place, a very impressive result, you moved through the pack and stayed there, you must be over the moon!

Yeah I was well chuffed with the first first race. I got away maybe eighth on the first lap and started to work my way forward, I passed a few guys and a few guys dropped out but that’s racing, I’ve been on that side of the fence before. But third place, over the moon with that, people can say what they want but they are not taking that away from me! I have put in a lot of hard effort and work the past few weeks to get that.

You pulled away from that group that Edmonds was in initially, but they caught you again towards the end, were you flat out at the start or just managing it at the end there?

I was riding comfortably at the start, with a nice flow and all, then I seen on the pit-board P4 and then I saw Pocock go out and knew I was third so I thinking, ‘ shit, don’t want to throw this away!’ I just tried to bring it home then, I didn’t want to make any mistakes. I almost went down on the finish turn with a few laps to go, I was just over the moon to bring it home to be honest with you! I never, ever dreamed of being this high up in an MX1 Maxxis British championship, especially when you take into consideration where I was six months ago with a wrist injury.

And that’s not just the last six months, that’s everything you’ve been doing since you were a wee kid, I’m sure you’ve been here watching British championship races, now you are the guy everyone was hanging over the fence for the whole way round, it must have felt awesome!

I have goosebumps even thinking about it. I remember coming here as a kid and Martin Barr was qualifying second and third, Sandstorm playing before the start and you were walking up watching thinking I want to be that guy. As you say, now I was that guy running third, it was like a dream come true, I can’t thank everyone enough who has helped me get here to this stage, I just want to keep pushing forward now.

The second moto it looked like you were struggling to get yourself ur rhythm the first few laps I presume you went down big? Any pain or injuries from that?

Na, no pain, I hit my head a bit and sand got inside my goggles and stuff. But yeah I just couldn’t get into a rhythm. I was riding comfortably in the top ten but even at that, I didn’t feel I was riding good at all so I was a bit disappointed with that, I came in and I wasn’t very happy at all but we will just take the positives out this weekend and try and move forward.

That first moto shows the level you can ride at, although Simpson and Pocock had a DNF you were still beating some good names to be in that top five, that must give you a lot self-confidence in your talent?

Yeah absolutely. This year especially. The past years confidence has never been a problem with me but coming off that injury and stuff at the start of the year I just didn’t believe in myself at all. I have been chatting with a few good people in my corner and they have been trying to give me the confidence and I have started believing in myself again and it’s obviously working out.

I was there when you broke your wrist at the the supermoto, but it turned out not to be a regular broken wrist, it was badly damaged, was there a concern you weren’t going to make the start of the season, especially with moving up to the 450?

Absolutely, at first it didn’t look to bad, we thought it was maybe just a small bone broken and then by the time we got from the track to the hospital I had lost all feeling in my hand, so I was starting to panic a bit then.

I got it fixed and stuff and still was pretty confident at would be back no problem, doctors were telling me I was going to be off for a year, and I was thinking yeah, yeah they say the same thing every time! But whenever I got the cast off and stuff the cast was off for maybe a month, month and a half I realised this wasn’t straight forward. I couldn’t get the movement going and was in a lot of pain, even still now the pain comes and goes. I’ve just accepted now the movement is never going to come back, and I had to get used to riding in a different way. But it’s working out and I am still enjoying riding the bike but did I think I was going to be done for the season? Just before the start of the season I thought I was done for good, I thought I would never race bikes again.

It’s a similar injury to what Graeme Irwin had?

Same injury as Graeme, I think he had a few more complications along the way but yeah the same injury, broken scaphoid and dislocated so damaged all the ligaments, so that’s what’s making it complicated.

Just looking ahead to the rest of the season you have to be in the frame for the Nations now, and you are battle for Ulster and Irish titles, you must be excited about the next three months of the year?

Yeah I have a long three months before the Nations comes around, so first of all I want to get through that healthy. The team is not picked yet, Philip is the man to decide that but I’m sure he will make the right decision. If we are picked I will be super excited and give it all I have got, if not it’s back to the drawing board and we will work on getting picked next year!

I think I will be in with a good shout, I am going to do the next three British championship rounds, I am leading the Irish, I’m up there in the Ulster but I am going to miss the next round of the it because we have the MX Nationals and I am leading it. Hopefully we can turn what was a slow start to the season into a good year!

And you are back to work tomorrow after finishing third in a British championship moto – then back to reality in the morning!

Yeah the highest of the highs and the lowest of lows! I’ll be back on my hands and knees in the morning. When you are looking at Tommy Searle he is probably heading off to get ready for the next GP now on a factory bike but them guys worked hard to get there, hopefully my time will come.