Interview: Martin Barr – back on the podium 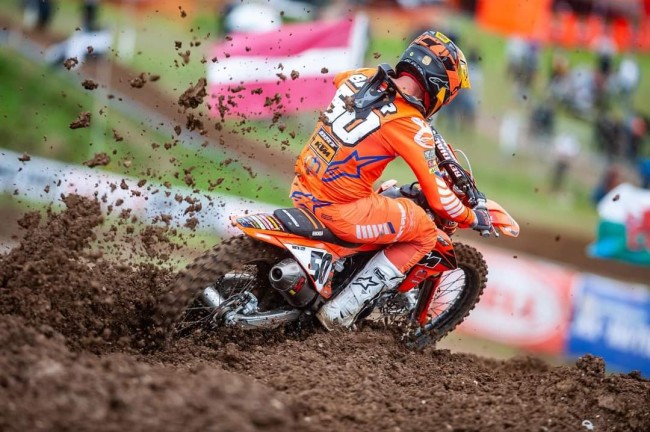 After starting his own BRT KTM team, it has been a long wait for Martin Barr to showcase the team and his 450 skills in 2020. But a podium at round two of the MX Nationals at Landrake underlined Barr’s ability and longevity in British Motocross as well as his motivation to keep pushing for wins and podiums in what is a very competitive MX1 class in 2020.

We caught up with Barr to talk about what has been a strange 2020 season thanks to Covid and that podium at Landrake.

Let’s start with the whole Covid situation, you are running your own team, how does that work in your position, was it easy to keep riding and keep the motivation?

As you said I have started my own team and it has been a lot of hard work to get into the position we are in but then obviously with the whole Corona situation it has been very, very frustrating that we can’t showcase the sponsors we have got on-board by going racing. It’s been a long, weird year, it’s the most I have been at home in 15/16 years. It has been nice that end of things but I have put in a lot of work over the winter to get myself up to fitness and the team off the ground.

I have really good sponsors behind me, so hats off to the MX nationals they have their series up and running, although it might be short, we are getting four rounds, at least it’s better than nothing. We can go and put the sponsors and the team out there in front of people. I know for 2021 it’s going to be very difficult to keep sponsors on board and get new sponsors on board. It’s definitely going to be testing times, it’s not something I am looking forward to but everyone is going to be in the same boat.

I hope the result last weekend is going to stand by me and show people that I still gave it, that I still have the determination and drive to go and be the best I can be and still be able to stick it up on the podium in such a fast class, it’s a a massive achievement not only for me but the team as well. The people I’m racing against just turn up, everything is done for them, they are full-time professional riders whereas I’m doing everything myself in the background to get to that position and go and do the racing racing then top it off with a podium, it was very satisfying. All the hard work that we have done has been worthwhile.

The first round at Hawkstone what were your thoughts on that, was it a bit weird racing again and having that intensity?

Hawkstone is obviously one of my favourite tracks, I was really looking forward to it to get racing again. The day started off okay I was fifth in qualifying, race one I had a really good jump but someone came across me and we tangled on the start straight so I was outside the top 20 on the first lap but I managed to come back to eighth. On paper it doesn’t look very good at all but my riding was really, really good. Race two I got a good start but just kind of struggled, I didn’t find a really good flow and dropped back to seventh but in saying that it was a tough class. but I was disappointed in how I dropped off the top guys although my lap times were the same as them.

Leaving there I took that as a positive, I was there or thereabouts not far off the front guy. It was nice to get a race under my belt and the next round was Landrake, not one of my favorite tracks but I have rode in many times and you just have to deal with it. I managed second in qualifying which set me up nicely for the day with good gate picks.

Race one I was outside the top ten and worked my way up to eighth, Bobryshev, Van Doninck and Nicholls were just in front of me, everytime I closed them in and tried a different line to pass them I just lost time. So it was a frustrating race because I felt I could have got up further but just couldn’t make it happen.

Race two I got a really good start and just went with Tommy and Kullas at the start of the race and got pulled along with them a little bit but then probably about the middle of the race Sterry and Bobryshev caught me a little bit. I just think it was down to race intensity, I think I didn’t have enough race time under my belt compared to them guys who had three GPs in Latvia the week before. They actually passed me but they crashed and I got back by them. Once that happened I kind of settled myself and got breathing again and got going again. Dylan Walsh passed me with a couple of laps to go think it was but it was P3 which was good enough for second overall on the day. I was really happy with that for myself and the team and to show people I can still do it. Hopefully that result will stand by me and I am looking forward to the third round next weekend at Cusses Gorse.

The track was really rutty, Jake Nicholls complained about it but Tommy Searle seemed to like it. What were your thoughts on the prep?

It’s not one of my favourite tracks only because back home we don’t have anywhere to practice big, deep ruts like that. I didn’t hate it, I didn’t love it but I have ridden tracks like that before and you just have to deal with it, it’s how you overcome that. It’s one of them tracks parts of the tracks you had to race and other parts was kind of like enduro, just on pegs and being steady and keeping a flow with it so, but I got on with it. There was plenty of line choices but they weren’t all fast there were maybe only two main fast lines and if you tried to go off those lines you lose time. It was good, it definitely sorted the men out from the boys, it’s good to have a mixture of everything. I am looking forward to Cusses next week, it’s a bit more jumpy and wouldn’t be as rutty.

How are you finding racing the 450, are you having re-adjust your style in the races?

It hasn’t been too mad, obviously I have raced 450s before. I had just been in MX2 for so many years I needed a change, I am really enjoying riding the 450. The bike is working fantastic, my dad has it working really good the way it engine-wise. Before I went there I worked hard to get my starts up to scratch because over the last couple of years they just haven’t been happening for me. Things have been looking good in that way, it’s been really enjoyable riding it and I didn’t have to change my style too much. I am fortunate enough I can jump between a 250 and 450 and it’s no real problem for me, my style suits a 450 really good because I am so smooth, the class at the minute is the most competitive it has been in ten years, you need to get a start, the boys up front are on it, there is nowhere to hide, you have to get a start to get stuck in. It’s really good for British motocross, long may it continue and hopefully in 2021 we can get back to normality.

I was watching the new 450 EMX Open championship in Latvia, is that something you guys from the UK can do, is it a realistic proposition if you have aged out of the MX2 classes?

Lommel is coming up and I would love to go and do that but again it’s the financial side of things to make it possible which is just unfortunate. The EMX Open it looked like a decent field of riders there, but I think I would rather be in the MXGP class, but saying that you are doing well there if you can even score points.

Them guys are absolutely fantastic to watch with it being so competitive at the minute, motocross in Europe is healthy that way but for the ones not on the big team it’s difficult to go and showcase yourself at that level because the factory teams have so much of an edge on everyone else but who knows, I will keep working and putting the time and effort it and see where it leaves me.

Budget-wise, if you go to a team or manufacturer and you want to do EMXOpen and the British championship, does a British sponsor not really care about EMX or what way do they see it – it’s still a big title.

To a certain degree. British sponsors, if they don’t do anything worldwide then it’s not overly beneficial for them. The likes of Latvia, they are not going to get much revenue from it, although it’s good if you get a good result you get a bit of publicity, but if you are going that far you would rather see it on TV.

When i was doing the EMX250, if those races were showcased on TV like MXGP and MX2, it would be a lot more beneficial for sponsors to get on-board. It’s a tough one, a lot of sponsors that are into the sport would love their riders to do that series and be in the world championship paddock but others with a business mind feel it’s not really benefitting us to be in Latvia if we are a British workforce only. It depends on the sponsor really.