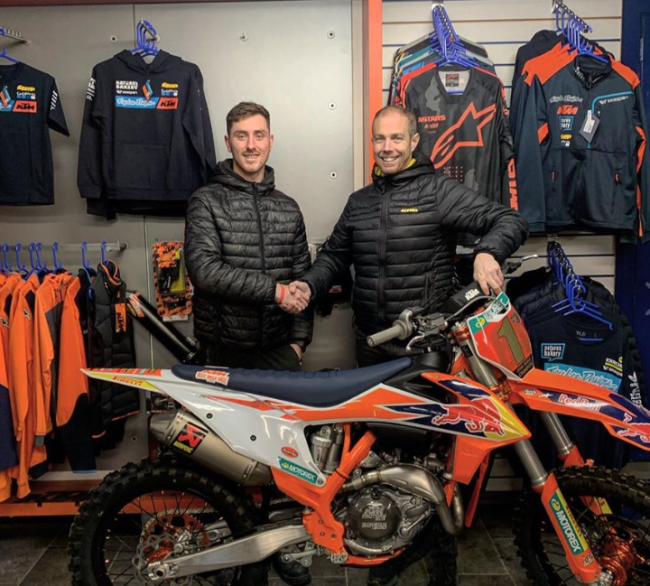 Despite an injury this year, Luke Smith still had a good year contesting in the MX1 British Championship, the Irish rider clearly suits the bigger bike much better.

For the 2020 season, Smith will be moving back home after the last couple of years living and working in England. Smith has done a deal with Norman Watt Motorcycles for the season ahead.

We caught up with Smith at the recent FXR rider and product launch night at E-Trax to discuss a range of topics.

Gatedrop: Luke, we are here at the FXR rider and product launch night at E-Trax. I think you’ve been here once before, what’s your thoughts on the facility?

Smith: Yeah, I think it’s pretty mint. It’s obviously all indoors so that aspect of it is awesome, you can come here if it’s minus ten, raining or whatever. I think it’s really good but it’s a weird experience having no noise. The aspect of riding the bike is pretty similar and it’s good to go out and do ten minute sprints.  You can ride with your mates and I really enjoyed it to be fair.

Gatedrop:  I think it’s a great way to get new people in the sport, if you want to ride but don’t have a bike, this is the perfect facility to come and have a go at it?

Smith: Yeah, I think that was one of the main ideas for them here. I know just from looking at the leader-board that you’ve got people from mountain bikers, road racers, circuit riders and then a lot of kids – people who have no involvement in bikes at all but just come for a bit of fun. Quite a lot of them probably get hooked at it too the way we all have. As I said, I think it’s a really good idea and they’re doing a good job with it. It’s good to see it working for them because they’re still up and going and putting money into it.

Gatedrop: Just on FXR, I believe you’re newly on-board for them, just what’s your first impressions of the gear?

Smith: The gear seems mint. I haven’t really done much riding or anything yet, I’ve only done a little bit with it but the comfort is unbelievable. I’m one of those riders that likes to be kept cool when I’m riding and not get too warm. The highest level of kits are vented and really light which is great. I’m looking forward to putting more hours on it and so far I’ve no complaints at all.

Gatedrop: Just on your season, you moved up to the MX1 class, I think the bigger bike suits your riding style better than the 250cc. Where you happy with how things went this year?

Smith: This year was good, it was the best year that I’ve had. We started off pretty good, especially in the British Championship, the year went pretty good. I had a little mishap during the middle of the year where I hurt my shoulder, unfortunately it meant I had to miss a round of all the series’ I was competing in.

My goal was to get into the top ten and I think my best finish was an eleventh so going into next year that’s still the goal. Going from the year before struggling to get into points and then being consistent in the top fifteen more or less at every race that I done. Getting eleventh’s and twelfth’s, results like that is a really good improvement. I just need to keep it going and keep moving forward for next year.

Gatedrop: How would you compare racing the MX1 class to the MX2 class? It seems like in MX2 everyone is just pinned for the entire moto whereas in MX1 with the way you have to ride the bike you’ve to be smooth and not as aggressive?

Smith: I would agree with that. Obviously in the MX2 class, all the 250cc are tuned so to start off with it’s hard to be in the MX2 class on a low budget. The racing side of it, like you say, the MX2 class is so intense, you get out of the start and it’s all out for the full race.

I feel like with the 450cc, the first few laps are still really intense, don’t get me wrong but after that, with the way you have to ride the bike everyone sort of settles into a pace. In my opinion, it’s a better way to race, everyone settles in and calms down a little bit. I’ve had some really good races in the MX1 class and it really does suit me more to be smoother on the power and keep a good flow going rather than on the 250cc when you’re always on the clutch and on the gas. I definitely think the 450cc suits me better and I prefer racing in that class.

Gatedrop: You had a good Yamaha team behind you this year but it sounds like a change of plans for 2020. Can you tell me about your plans?

Smith: This past year, I was on the MSR RedLine Yamaha. I still have a really good relationship with those guys but they’ve changed the direction in which they want to go. For next year, I’m moving back home to start with which will be a big change for me after being in England for two years. Thankfully I’ve spoke with Ricky from Norman Watt Motorcycles and we’ve been able to put together a package again for 2020. I will be back on the KTM next year riding for Norman Watt Motorcycles. The goals are the same with everything. Ricky has been able to put me together a really good deal. I’ve got a lot of really good sponsors still on-board as last year so that’s really positive.  We are looking really good going into next year.

Smith: It’s hard to explain, it’s kind of a bit of both really. I feel like being in England is more beneficial in terms of the tracks and you don’t have the same travelling to do as being here. I feel like if you’re struggling and you have a few bad races or something like that, it’s a lot harder in England, especially being away from my family. You never get away from it there, you can get yourself into a bit of a rut whereas when you are at home, you’ve got your family and friends you grew up with and you can get away from it a little bit more when you need too and have more of a balance.

I’m still going to put the work and time in, if anything probably put more time in because you’re doing all the travelling and stuff but it gives you that chance to get away from it a little bit. It’s something I’ve enjoyed the past few weeks being home and I think it will help me moving forward at the racing.

Gatedrop: In terms of the championships, will you race the Irish and Ulsters as well as the British or what’s the plan?

Smith: We are obviously going to concentrate on the British, it’s the main one we want to do. I will do at least one series at home whether it’s the Ulster or the Irish. I’m waiting on the dates to come out before finalising that, I’ll do at least one of them and as many races as I can at home, the British and I would like to do one other series. I see MX Nationals have a round at Desertmartin which is obviously good. I’d like to do one more but it depends on the finances. 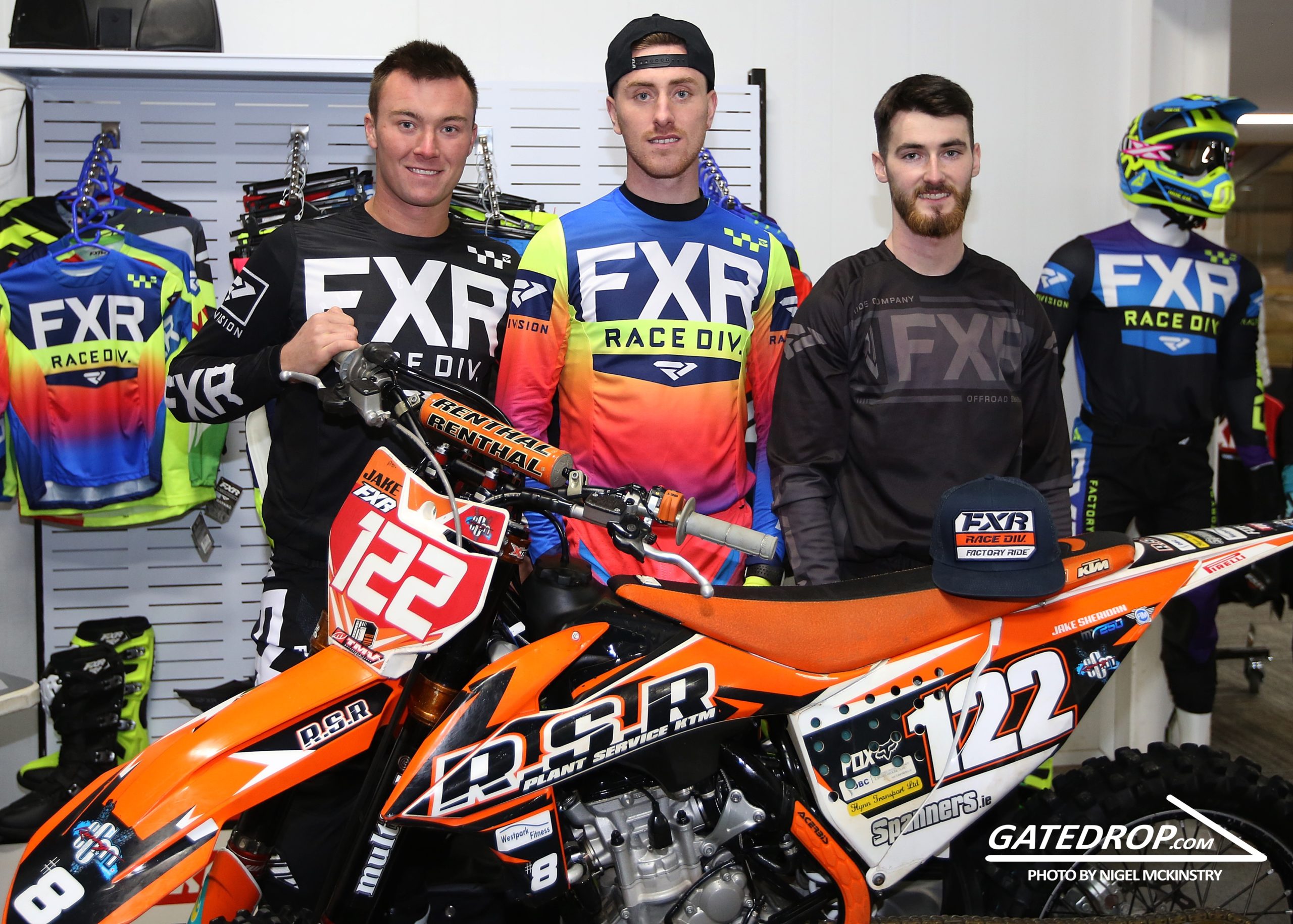 Gatedrop: The MX1 British class next year is looking stacked! Barr, Bobryshev, Van Doninck, Searle and Simpson to name a few – it’s going to be fast! Are you looking forward to the challenge of racing with riders with GP experience?

Smith: There’s no doubt about it, the class is going to be stacked. It’ll be the most stacked it’s been for a number of years but I am looking forward to it. I did speak to some people about maybe going back to MX2 to try and get some better results but I feel the MX1 bike suits me more.

Gatedrop: Just on the racing at home, have you missed it? Also, you should be battling for race wins, that should give you more confidence – that might mean you could end up riding better in England having that winning feeling?

Smith: I think that aspect of it will be right. It’s kind of weird, this year I’ve done three championships which meant I was so busy with the Bridgestone Masters, MX Nationals and the British. There wasn’t really that many weekends off so it was the case that I was at home, it would have been hard to fit everything in with everything I done.

I think it is going to be good for me to be fair, I expect to be up front at the racing back home here. There’s other guys, the Meara’s, McCormick and all those guys that are going to be at the front too. I expect to be up there with them battling for wins. We are obviously all fast guys and we are all pushing over in England as well so I think us pushing each other, it will make us all better. It will help the confidence getting top three and race win results – hopefully we can take that over to England and put some good results together.