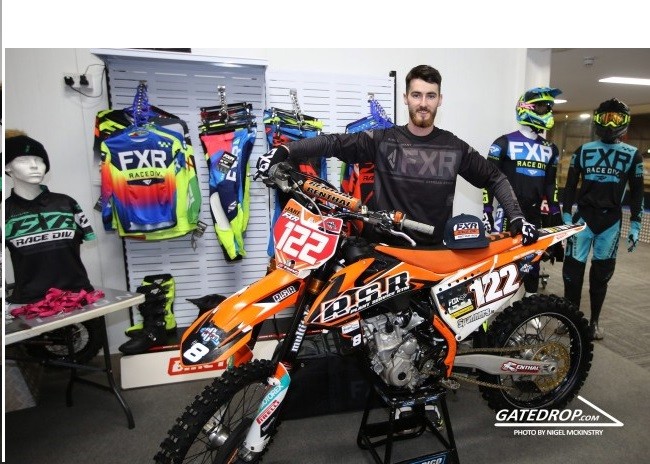 This year Jake Sheridan got his first taste of racing as part of the GP paddock as he contested the EMX250 round at Lommel. Unfortunately, he didn’t qualify but he was very close and considering how rough the track was, Sheridan looked pretty good.

For the 2020 season, Sheridan has plans to race as many rounds of the MX2 World Championships as financially possible which is great to see and it’ll be nice to see an Irish rider in the paddock.

Due to the age rule this will be the last chance for Sheridan to have a go at the MX2 World Championship so hopefully he manages to do well at the GP’s he contests.

The Irish rider had a great year winning his first title – the MX2 Irish Championship and now he’s left wanting more and better results in England.

We caught up with Sheridan at the recent FXR rider and product launch night to discuss a range of topics.

Gatedrop: Jake, we are here at the FXR rider and product launch night at E-Trax. Have you been here before and what’s your thoughts on the facility?

Sheridan: This my first time here, it’s brilliant. It’s really good craic and I’ve had a lot of fun out there tonight. It’s a bit different from the old Motocross but it’s really enjoyable, fair play to them.

Gatedrop: How it is riding around in one of the electric bikes when you’re so used to a modern bike – the no noise as well must be quite strange?

Sheridan: Yeah, it is a bit confusing, I was looking for the back break out there a few times (laughs). It’s really good, it would actually be really good training for the winter if the weather is bad at home, you could always come here instead. It’s pretty cool.

Gatedrop: To get new people in the sport, a facility like this looks like an ideal way to do it!

Sheridan: Yeah, definitely. To get little kids into it and stuff like that, it’s brilliant. It will give them a little bit of an insight into what Motocross is. It’s a bit of a stepping stone into the Motocross scene, it’s really good.

Gatedrop: FXR, I think they came on-board with you this year and you’ll continue with them for 2020. It must be nice to have them on-board again and what’s the gear like? It looks very professional and comfortable.

Sheridan: FXR have been good to me so it’s good to have them on-board again. It’s really brilliant gear, they have so many different colours and different ranges. It’s affordable too which makes it even better. I’m really impressed with the gear and what they have to offer.

Gatedrop:  Just on your season, racing at home in the MX2 class, it was some good races with the likes of McCormick and Keogh, it looked like a fun season and to clinch a title as well, you must be pleased with how the season went?

Sheridan: For sure, to clinch the MX2 Irish Championship, my first ever championship. I learnt loads trying to keep the boys behind you. Dealing with the pressure of not getting a good start and things like that. It’s definitely a good stepping stone up to the likes of the British. It was brilliant racing at home this year. 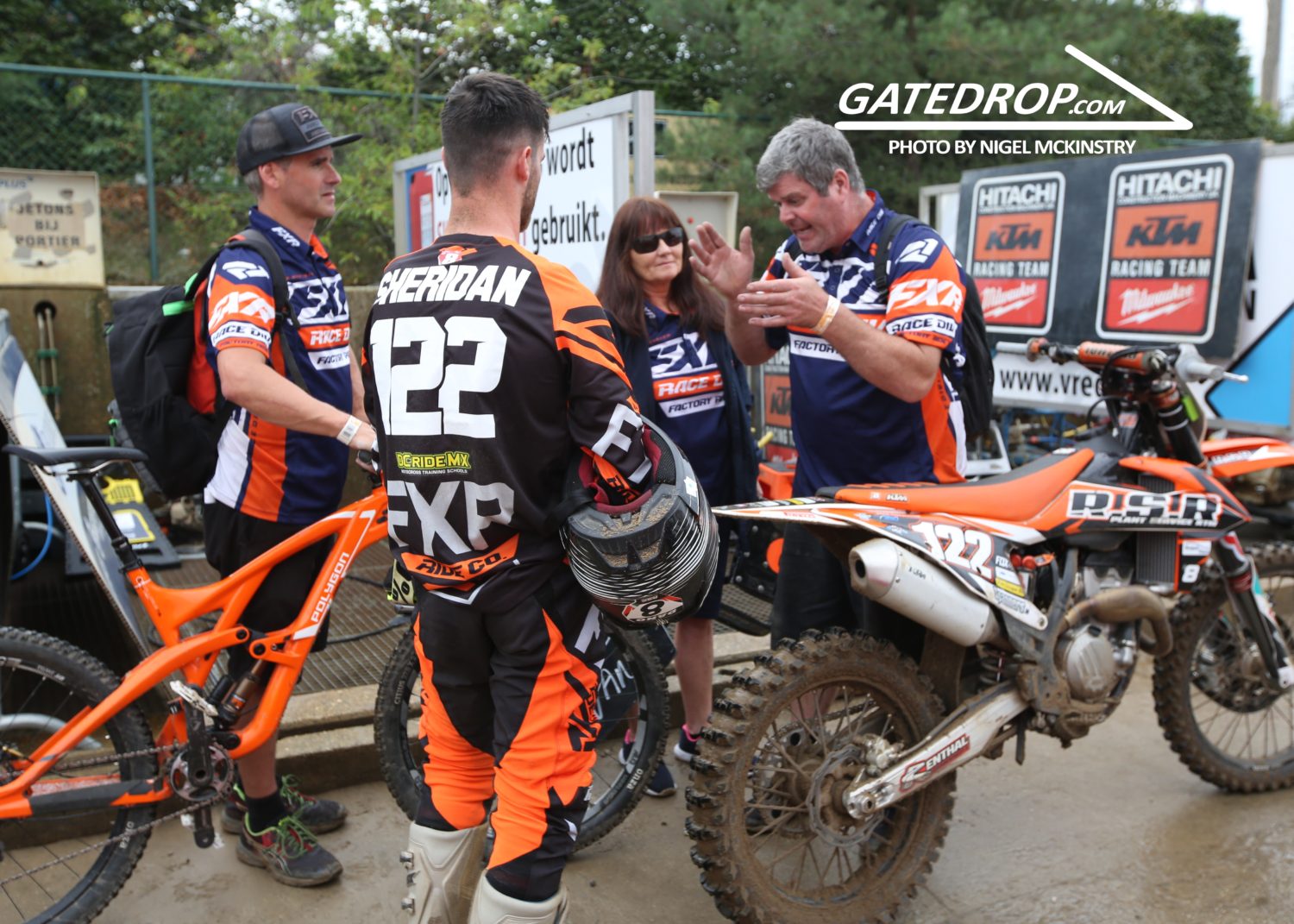 Gatedrop: Growing up you probably always dreamed of becoming Irish champion but now you’ve achieved that, I’m sure you want more and to translate that speed in the British Championship?

Sheridan: Definitely, you know looking back years ago, going to Desertmartin and watching the British and all the home boys doing really well, it was a dream come true kind of thing. It’s going to be good, I’m getting better on the bike each week and getting stronger and fit again.  Next year should be really good, I am looking forward to it.

Gatedrop: Have you any plans for over the winter yet that will see you head overseas or will you just stay here to put the work in?

Sheridan: We have plans to go to Spain and stuff. We will head back out to Redsands, it’s a really good facility for training. The track is always rough and prepped good. It’s a GP track really and you have a lot of European riders coming which means you can learn lots of them as well. We are heading out there in January and come back in February.

Gatedrop: Have you went to Spain in the past for winter prep or will this be the first time you’ll do it?

Sheridan: I done it this year, in January but we were only there for two weeks. This year we are going to try and spend a little bit more time out there to get physically fit, strong, bike fit, get a good setup on the bike and do a bit of testing. It’s a really good place to go too.

Gatedrop: For 2020, what are your plans, have you any teams knocking on the door or will it be a similar setup for you?

Sheridan: I will be doing the same sort of thing as this year. Hopefully I can get some good results next year in the British and even score points in the World Championship. Something might come, so hopefully I can have a strong season and it might open new doors hopefully.

Gatedrop: Are you going to fully focus on the British next year or will you still do the Irish and Ulsters or just selected rounds of them?

Sheridan: I’m going to be focusing on the British and then doing as many GP’s as we can. I will still race at home but maybe only one or two rounds. I will definitely be doing the two rounds at Desertmartin with the MX Nationals and the British. I’ll do a couple of Irish and Ulsters.

Gatedrop: When you say you’ll be racing the GP’s, will it be the MX2 World Championship or EMX250 rounds – you rode the EMX250 series in Lommel this year, how was that?

Sheridan: I threw myself into the deep end doing Lommel, for sure. The way I looked at it was that it’s the only way I’m going to learn, I may as well go in and see what it’s all about and not run away from how hard it’s going to be. Next year we are hoping to do four or five GP’s in the MX2 class. It’s a massive step, I’m going to get beat but you know it’s a big learning curve and it’s to get that kind of intensity and the level of riding. I want to learn lots from the World Championship guys.

Gatedrop: It’s obviously great to hear you’ll race some GP’s, what’s the reasoning for doing them instead of EMX250? I think this will be your last year to do it due to the age rule, so I guess that’s why?

Sheridan: Yeah, that’s right. It’ll be my last year of having a go at it. You get more track time in MX2 and financially I suppose it was the better thing to do. Spending all the money to get there and if you don’t qualify for EMX250, it’s not a waste but you don’t get as much value for money out of it. It’s hard to get sponsors but we are trying to work things out. We have 1-2 personal sponsors at the moment and everything is working well. 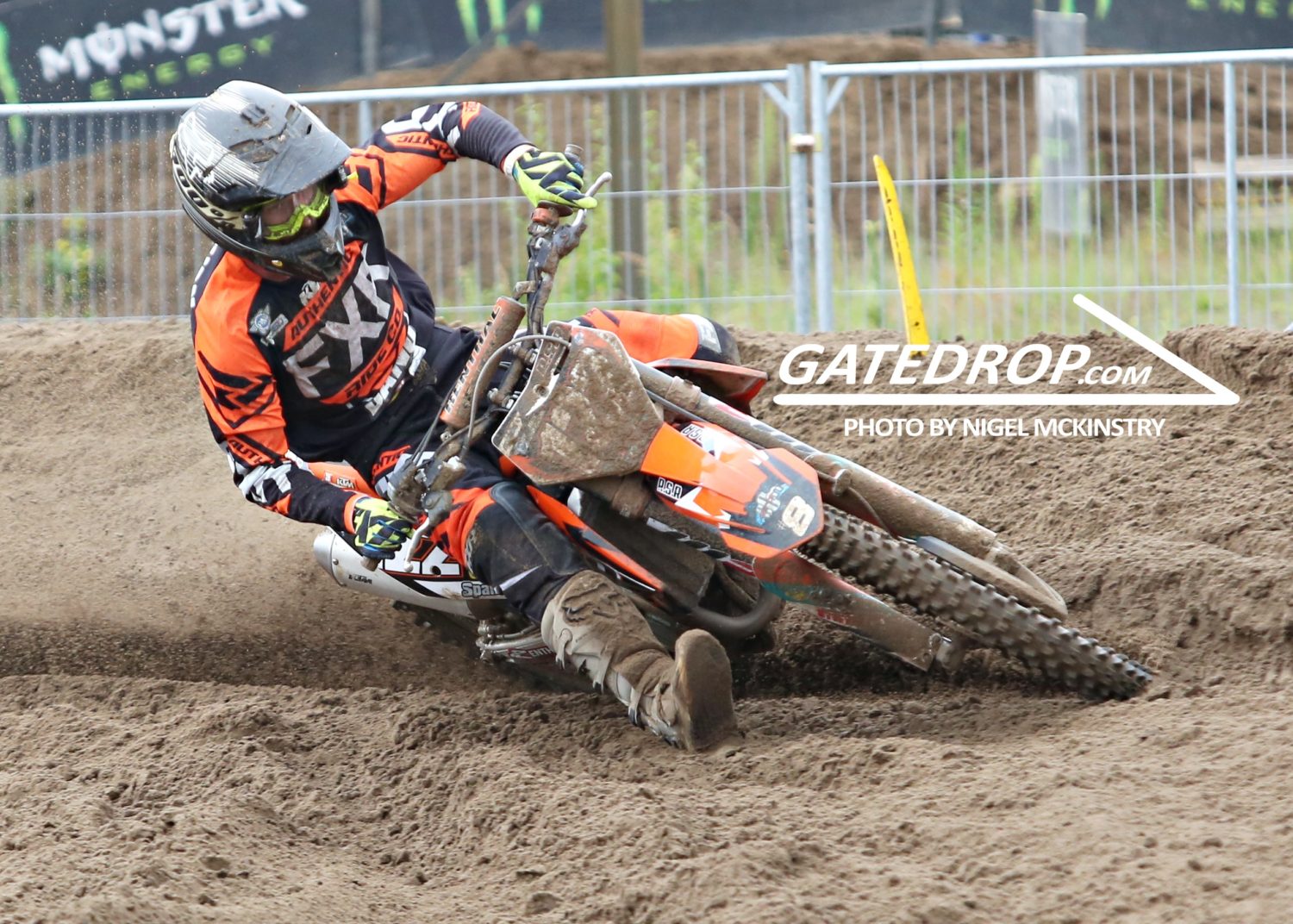 Gatedrop: When looking at the calendar what kind of tracks are you hoping to race? It might be hard to get an MX2 entry at the start of the year because there’s only 40 entries but what rounds are you looking to do?

Sheridan: We were going to do Matterley Basin but because we are going to Spain and stuff like that, I think we are going to go straight to Valkenswaard the week after and start off from there. We’ve been looking at Spain, the track hasn’t been announced yet. We will probably do France and Germany as well. Obviously, Lommel later in the year as well.

Gatedrop: If you can’t get an MX2 entry because Youthstream can only give 40 out for MX2, will you consider racing EMX250 if it’s on the same weekend or will you maybe pick a different GP to do MX2?

Sheridan: I don’t mind at all. I just want to get the track time and get racing. It wouldn’t bother me if I’m doing EMX250 or MX2. If that’s what I’ll have to do, then that is what I’ll do. It should be good either way.

Gatedrop: Just on Desertmartin, for the first time ever it’ll have an MX National and a British Championship. You must be pleased hearing that and it’s good for the sport at home?

Sheridan: It’s probably about time they come over (laughs). For us boys to head over to England racing, you know it is tough. It’s going to be brilliant, it should be great for the sport here in Ireland as well.

Gatedrop: Just on the British Championship, what’s your goals – top 10 or push to try and become a top 5 rider?

Sheridan: I had one or two top ten results this year. They weren’t consistent but if I get a really good winter under me. This year I was coming into the season of an injury so I wasn’t riding so well at the start of the year. I kind of only got going at the end of the season which was kind of too late. I’m going into the winter strong, fit and healthy. We will hopefully come out swinging in 2020.

Gatedrop: Just on the British MX2 class, you might be 16th one race and 10th the next. I don’t think people at home understand how there’s so many guys the same pace, would you agree?

Sheridan: For sure, if you aren’t going to get out of the gate you’re going to make really hard work for yourself. There’s maybe half a second splitting 1st to 16th. It’s the intensity as well, you have to be precise, hit your marks. You have to be on the ball every race.