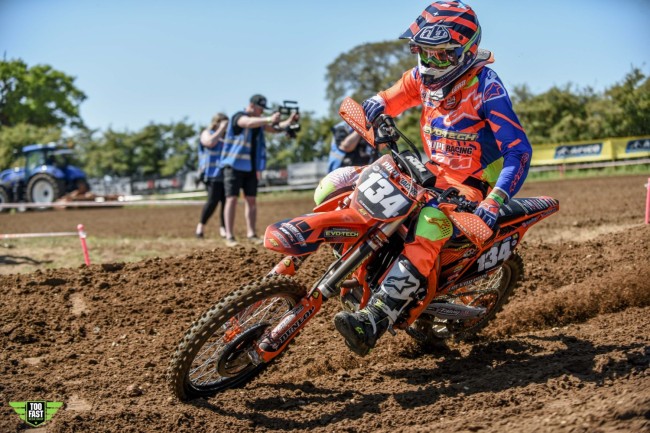 With twenty days to go until the Maxxis ACU British Motocross Championship rocks into Duns, Scotland the promoters behind the round, RHL Activities, caught up with MX2 rider Liam Knight who is currently holding fourth position in the series.

RHL: Can you tell us a bit about yourself and your motocross career so far?

Liam Knight: “I started riding when I was six and competed in the British Youth Nationals until I entered MX2 in 2015. My first year in the pro class went quite well as I finished 11thoverall. The following year I finished in 5th in the championship. 2017 wasn’t such a good year for me as I finished outside the top 10. This year I have turned it around and I am currently in fourth in the Maxxis ACU British Motocross Championship.”

RHL: This year you have moved from Kawasaki to KTM; how do you feel and how is the bike compared to last year?

Liam Knight: “Making the move back to KTM was the right decision for me. I feel much more comfortable on the bike. Mike and Nigel at EvoTech have a really strong engine for a KTM and I have a lot more power than last year, which is good.”

RHL: You’re currently leading the ACU Expert MX2 British Motocross Championship with a 23-point advantage over Josh Spinks whilst holding fourth in the Maxxis MX2 British Championship; what are your plans going into Duns next month to keep the title lead and push your MX2 Championship further?

Liam Knight: “It feels great to be back at the sharp end. I have been getting good starts every race and it has made a big difference. The plan for Duns is to get good starts and be in the mix for both races. My main aim at the moment is to get on the podium.”

RHL: Blaxhall was home to your first ever Maxxis British Motocross Championship moto win. How did it feel?

Liam Knight: “It was great to get my first moto win. It was a great race battling with Josh Gilbert – he put me under pressure the whole race. The second race wasn’t so great, I had a couple of big crashes, but managed to finish the day in fourth (on equal points to third).”

RHL: At Desertmartin you finished in fifth. How did it go for you?

Liam Knight: “In race one I finished seventh and in race two I got the holeshot and finished fourth. The result overall wasn’t so bad, but I wasn’t happy with my riding in either of the races so there are things I need to work on for the second half of the year.”

RHL: What is your main goal for this season in the Maxxis?

Liam Knight: “My main aim for this year is to try and finish the year on the podium.”

RHL: What are your thoughts on Duns; have you raced there before and what’s your plans/goals for the sixth round?

Liam Knight: “I have raced there a few times. I like the track as it’s one of the better hardpack tracks around and it is always prepared very well. My plan is to keep pushing for that podium finish.”

RHL: Do you get much time for training and bike time in between the events?

Liam Knight: “I train throughout the week before and after work. I try and get out on the bike on a Wednesday every week, but that doesn’t always happen.”

RHL: Finally, is there any advice you would like to give to the younger riders in the sport looking to compete in the Maxxis one day?

Liam Knight: “My advice would be maybe not to take the youth years too serious. Obviously racing in the British Youth Championship is great and racing against the fastest riders in the country, but racing still has to be fun and enjoyable to keep racing year after year. Stepping into the pro class isn’t easy and your physical fitness will show either good or bad, so training hard is really important.”

If you would like to see the Maxxis British Motocross Championship riders in action, then why not head to Duns, Scotland (TD11 3NS) on Sunday 29thJuly. For more information head over to www.rhlactivities.com