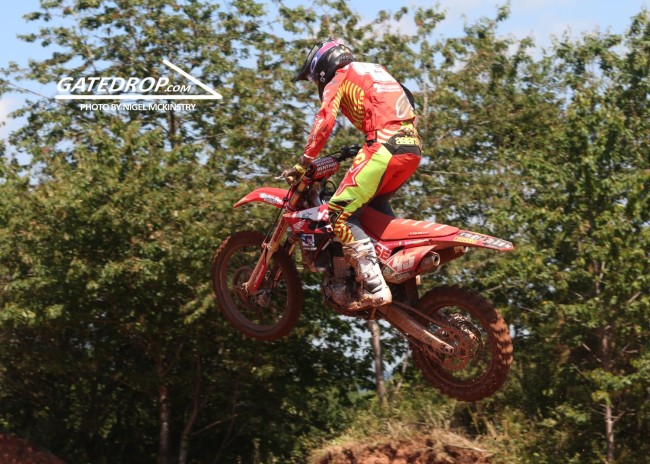 Jake Nicholls is a much-loved, hard-battling competitor in the British Motocross scene and a fine example of a rider that’s fought from the lowest of lows with injury and enjoyed the highs associated with dirtbike racing success. Leading the Maxxis British Motocross Championship aboard the Buildbase Honda under the guidance of Dave Thorpe, Nicholls has re-established himself as a force to be reckoned with, as he hunts the glory of a big-bike British title this season.

Dominating rounds three and four of the series with double moto wins at each, Nicholls, who announced his retirement from Grand Prix competition last year after a string of injuries, leads the championship, which heads to Duns on Sunday July 29 for round six of eight (although round one will be re-run in October). With Evgeny Bobryshev just 19 points shy of the top spot, Nicholls must manage his advantage should he wish to lift the crown at the end of the season. A fifth overall in Desertmartin at the last round (with equal points to Bobby in fourth) maintained the Nicholls’ strong finishes, but we caught up with the Ipswich rider to understand how the 27-year-old Honda-ace is doing so far this year and his approach for the remainder of the season.

RHL: So, Jake, you seem to be on fire so far this year; you have won two rounds with double moto wins and are leading the series, can you talk us through everything?

Jake Nicholls: “Thank you, yeah its been going quite well thanks, to be honest I’ve just been enjoying my racing and letting the rest flow with it and it’s worked out. Every time I get on the bike I try my hardest and I’m on a great bike this year, which has made the racing more enjoyable for me and that’s it really.”

RHL: While it’s still quite close at the top, you have a comfortable margin, is it more about maintaining the lead from now or race by race?

Jake Nicholls: “No, to be honest I’ll be taking it race by race, keep enjoying my racing/riding and push hard all the way till the end.”

RHL: You’ve definitely made a good comeback; do you think it was the right choice to retire from the Grand Prix series?

Jake Nicholls: “It was the right choice for me that’s for sure; I had stopped enjoying racing Grands Prix for a number of reasons and totally fell out of love with them. I feel like I’m enjoying my racing a lot more nowadays and it means I can work in our family business too.”

RHL: Are there any specific areas you’re looking to improve going forwards?

Jake Nicholls: “No specific areas, we are just trying to improve every part of my package. I have a hell of a lot of experience and using that in the right way is key.”

RHL: How are things in the Buildbase Honda team? You seem to be enjoying success in both classes?

Jake Nicholls: “The team is good. It’s a family run team with a strong history and passion for the sport. Our bikes are built so well and coming into each weekend with no queries about the bike is great. Josh (Glibert) has been doing really well too, which makes things better.”

RHL: What do you think to the Duns circuit?

Jake Nicholls: “Duns is a cool track – I remember when we went up there a few years ago after its rebuild. It was a very impressive and beautiful part of the world. I think the fact Bryan (Mackenzie) is now in charge of the track can only be a good thing.”

RHL: Will you make any kid of special prep for that race?

Jake Nicholls: “Nothing will change for my preparation for Duns, I’ll keep doing my training and practicing mid week and go up there to enjoy myself.”

To find out more information about the upcoming round of the Maxxis ACU British Motocross Championship at Duns, Scotland please head over to www.rhlactivities.com