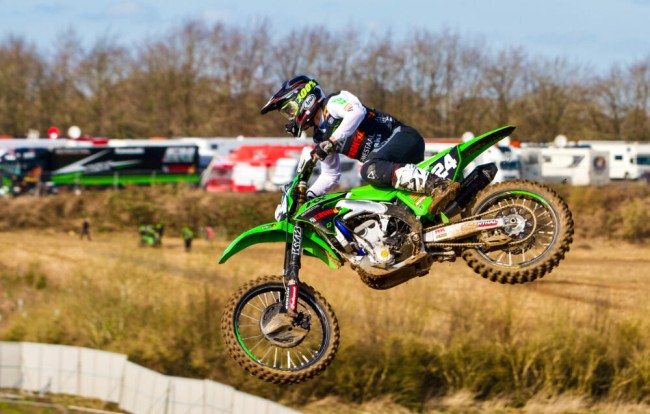 The F&H Kawasaki Racing team decided to snap up Norwegian talent, Kevin Horgmo after he finished second in the EMX250 series last year. Horgmo has been given the chance of racing the MX2 World Championship again which is what he deserves. At the opening round of the MX2 World Championship, Horgmo got good starts and showed some great pace. In the end he finished eighth overall after a couple of crashes but he had top five speed which is very encouraging.

We caught up with Horgmo at the end of the day to discuss how the opening round went for him and how he felt to battle at the front.

GateDrop: Kevin, you made your GP debut with the F&H Racing team here at Matterley Basin and coming into it I think you’d probably have taken an eighth overall but actually you had the speed to do even better which is encouraging, I think it’s been a very positive day for you…

Horgmo: For sure, the speed was good but just some silly mistakes on my part, but we will learn from that. I am a little bit angry with those mistakes of course but hopefully the next round or throughout the season I can improve on that together with Marc, the team and everyone involved. We had a really good off-season and improved on a lot of things so it can’t be much better, and we’ll build from here.

GateDrop: You’ve obviously raced a year of MX2 GP’s in the past but we didn’t see you too much at the front so how did it feel like to be battling right at the front?

Horgmo: That season was a little bit strange that I did already, it was covid season and stuff but yeah it felt really good to have a bike that could be up front at the start and battling with the top guys. It was really good and I felt like I belonged there, some of the guys I raced 4 years ago in EMX250 like Vialle so I know everyone who’s at the top. I also feel that I belong there.

GateDrop: This has been your first off-season on a Japanese bike, how quickly did you adapt to the Kawasaki?

Horgmo: I think already by the third day on the bike I was like: yeah, this is my bike! I really did feel comfortable quickly on it and I think that helped a lot because we had a short off-season. Since quickly got adapted to the bike it has gone good.

GateDrop: How has everything been going with the F&H Kawasaki team so far?

Horgmo: Really good. We have a good group working together so I can’t say anything negative. It’s been all good and I am really grateful for the opportunity they have given me to get me back to the top.

GateDrop: What’s it been like working with Marc de Reuver? He seems to enjoy working with young talent and helping them improve…

Horgmo: For sure it has helped me a lot. Marc, everyone knows that he is a special guy but in a positive way. He knows a lot about Motocross and also mentally he’s been working a lot with me. Maybe I have been struggling a little bit with that and making silly mistakes – of course I still did it today but that’s in a situation I’ve never been in before so I just need to be there more times and we’ll see how we end up. GateDrop: Coming into the weekend, what were your expectations? Did you surprise yourself a little or have you been that fast at the practice tracks that it’s not a surprise?

Horgmo: I haven’t rode so much with other MX2 guys so results wise, we were kind of like let’s just focus on the start and then we’d see after that. I feel good so the positions, I didn’t really think about, but it definitely felt like I belong there.

GateDrop: The two-day format made a return – some riders prefer the one day, what’s your preference?

Horgmo: For sure, I prefer the two days. Maybe the qualifying race is a little bit extra risk but for me it was good to get a lot of sessions and get out on track a few more times than only three times. It is quite hectic with the one-day format so yeah, I really enjoy the two-day format.

GateDrop: What was your thoughts on the Matterley Basin circuit today? I’ve been coming here for about 10 years now and that’s maybe the roughest I’ve seen it!

Horgmo: It was kind of crazy but it was fun. I enjoyed it and it was difficult, it was easy to make a mistake like you saw. I went down in both moto’s but that’s how it is. I had fun out there and the track was super but it could have been a little bit more racey, it was really difficult but that’s the same for everyone.

GateDrop: Lastly, I want to ask you about the latest Norwegian generation – there’s yourself, Fredriksen, Osterhagen, Tondel. Seeing you guys battle in Sardinia, it’s quite unbelievable seeing so many good riders coming from Norway at the moment. You must be proud to be part of it?

Horgmo: For sure, we are the four good guys and hopefully this year we have some 125cc guys coming up, some younger guys. I hope for a bright future for Norwegian Motocross, it’s always fun to see the kids grow up and eventually race them. Racing Osterhagen at the first International Italian round was strange but at the same time it’s really nice.