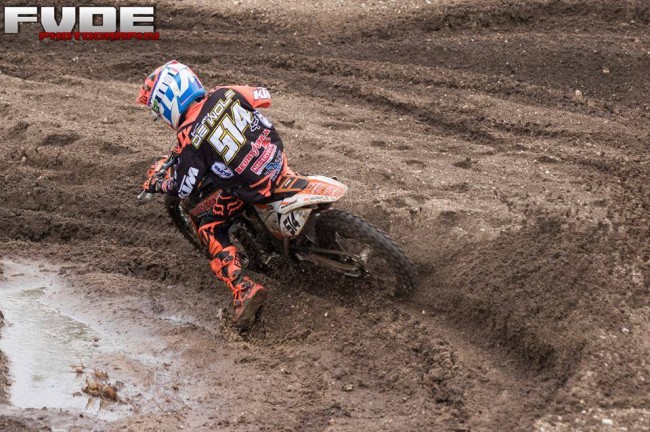 It might be Kay de Wolf’s first year on the 125cc after making the step up from the 85cc but he’s having a great season.

The very talented Dutch rider won his third consecutive Dutch Masters title and he also sits sixth in the EMX125 championship – impressive for a rookie.

We caught up with de Wolf to discuss his Dutch Masters title and rookie season in EMX125.

Gatedrop: Kay, coming into the last round the odds were against you but it must feel great to win another Dutch title?

Kay de Wolf:  I’m feeling really great. We had a really good weekend and went 1-1 so we couldn’t do more than this. I took the Dutch Masters 125cc title, I’m pretty happy with that. I want to say thanks to my team and everyone that supports me.

Gatedrop: You’ve won the last two Dutch Masters title as well so it’s now three in a row. How does that feel? It’s not often someone dominates like that.

Kay de Wolf: It’s really nice to do it three times in a row. I feel really happy about it, thanks to the team, mechanic and trainer.

Gatedrop: When you were young you probably watched the likes of Herlings, Coldenhoff, Bogers win these titles. I’m sure you want to follow in their footsteps?

Kay de Wolf: Of course I really want to follow in their footsteps but I still have a long way to go. But I am happy with this win and how everything is going.

Gatedrop: You raced the Junior World Championship in Arco, that one wasn’t the best day for you, you probably wanted more?

Kay de Wolf: I wasn’t happy with that one. I was thirteenth overall and I expect more than that. I will forget about that weekend, this weekend I got the Dutch Masters title so I’m happy with that.

Gatedrop: Just on the EMX125 season, as a rookie I’d say you’re having a great season. Are you pleased with how it’s going?

Kay de Wolf: It’s going quite well. In Germany I had some problems which pushed me back to sixth in the championship I think. There’s two rounds to go so anything is possible.

Gatedrop: You’re still a rookie but there’s still some things you can improve. What do you think you need to improve heading into next year?

Kay de Wolf: Of course I can improve the speed. When you look at Guadagnini and Guyon, they are like way faster. In Italy they were like 2-3 seconds faster or something so we still have a long way to go but we’ll work on it.

Gatedrop: With Guadagnini and Guyon moving out of the EMX125 series next year, you’ll be looking to challenge for the title?

Kay de Wolf: We will see what next year brings, I will just do my best next year.