Interview: Mikkel Haarup on recently returning to Denmark and his future 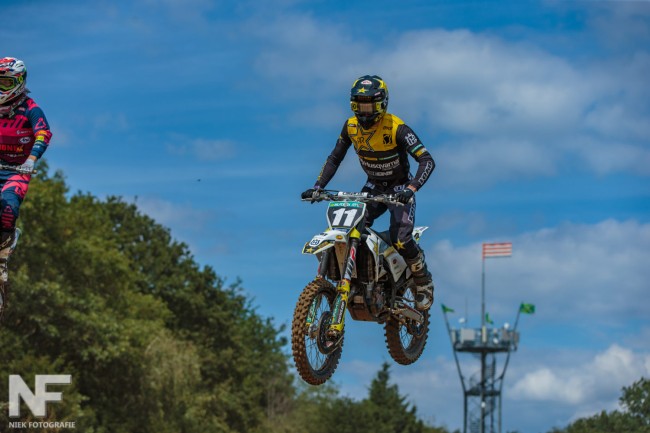 There’s no doubt that Mikkel Haarup has a lot of talent and should have a promising future in the sport.

The Dane talent, wasn’t happy with how the start of his season went so recently returned home to Denmark to work on his speed and riding. Haarup returned to racing at a high level at the final round of the Dutch Masters and ended up fifth overall.

For the rest of the season, he’ll now focus on the EMX250 series as he feels he can win in that class.

We caught up with Haarup to discuss his decision to return to Denmark and much more.

Gatedrop: Mikkel, it’s nice to see you back racing at a high level! Overall, a good day for you at the Zwarte Cross despite bad starts. Can you talk me through your moto?

Mikkel Haarup: I felt really good all day. In the first moto, I got quite a bad start I’d say, I was around fourteenth. I made my way through the pack pretty well and did a lot of passes. I think I was the guy with the most passes the whole moto to finish seventh.  In the second moto, I made a small mistake which meant I lost a few positions. I was able to fight my way back to fifth which I am happy with. I am super happy about my performance, I felt like the speed was really good. The time I’ve spent back home has really paid off.

Gatedrop: You spent some time in Denmark, just what was the reason for that? I don’t think you were injured.

Mikkel Haarup: No, No, I haven’t been injured. I just felt like I just needed to go back to do my work. It’s a lot of travelling and you don’t get a lot of time to practice and I really like to practice a lot. For me, I just needed to get up to the speed I wanted. If I don’t have the speed to compete at the top, then I don’t want to race, you know? It was better for me to wait a little bit. That’s what I did and now I feel really comfortable and ready to go back racing in Lommel again.

Gatedrop: What’s your plan now? Will you stay in Belgium again or go back to Denmark?

Gatedrop: You’ll not be racing the MX2 World Championship in Loket because you’re dropping down to EMX250 which you’ll do in Lommel. What’s the reason behind that?

Mikkel Haarup: Like I said, I hate losing. I always want to win and I don’t feel like I have the pace to run with the top guys in MX2 yet. I’ve decided to do the next few races in the EMX250, get some confidence racing for the podiums and then we will see next year. For sure I think then I’ll have the speed for the MX2 guys.

Gatedrop: For next year is your preference still to race MX2 then?

Mikkel Haarup: Yes, without a doubt.

Gatedrop: Have you got a contract with Ice One for next year or is it still up in the air?

Mikkel Haarup: There’s nothing decided yet. I haven’t signed any contracts, I know there’s a lot of teams that want to have me but nothing is decided yet. I am just waiting for the right offer.

Gatedrop: Denmark didn’t compete at the MXoN last year at RedBud but do you know if they’re planning to do Assen and how would it feel for you to get chosen and represent your country?

Mikkel Haarup: For sure, I would like to be representing my country at Assen but let’s see. There’s a few things that need to get sorted before going there. Without a doubt, if I go or if the team goes then I will be there as well.