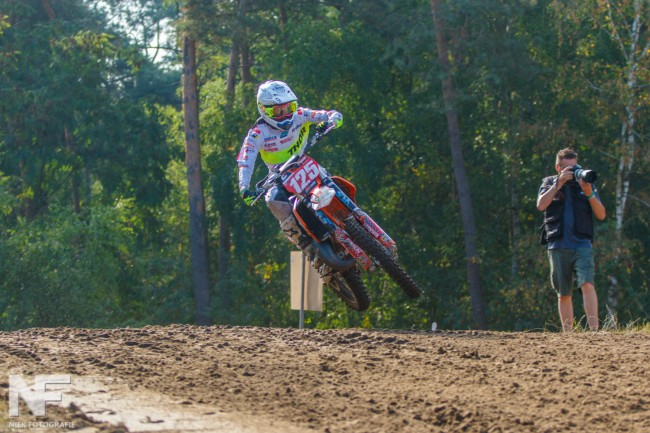 Emil Weckman has had a good season in the 125 class so far and clinching the Dutch 125 title at the Zwarte Cross added to the feel good factor of his impressive 2018 season.

We caught up with Weckman to talk about his title, a good EMX125 season and moving up to a 250f.

Gatedrop: Emil, it was a good weekend for you being able to clinch the Dutch title, you must be pleased with that!

Emil Weckman: Yeah, it’s pretty nice to win. I got a good start in the first moto, I was second and I was hanging behind for a few laps. I passed him and then it was a pretty clear race for the rest of the race. In the second race, I crashed at the start. I hit another rider on the inside and crashed. I got back from last to seventh so it was pretty nice. During all season at the Dutch Masters I had good and bad races so overall it was pretty good, I would say.

Gatedrop: In the second moto despite going down at the start you managed to stay calm, it’s easier said than done with a title on the line!

Gatedrop: What’s your thoughts on the Zwarte Cross, it’s both of our first times here, you don’t get anything else like this anywhere else in the world?

Emil Weckman: Na, it’s a pretty strange event let’s say. I think not many people know they’re watching motocross because they’re so drunk! But yeah, it’s a fun weekend with the music and stuff, it’s fun.

Gatedrop: What’s your goals for the rest of the season?

Emil Weckman: Let’s say that at Assen and Lommel, for sure I want to be on the box. In Switzerland the top five would be nice.  I want to finish top three in the championship.

Gatedrop: Has it been decided yet if you’ll compete in the Junior World Championship in Australia or are you still waiting to hear?

Emil Weckman:  Normally I will go there, we just need a few more sponsors to pay the tickets and stuff like that and then I will go.

Gatedrop: Have you ever been overseas before? You must be looking forward to going, it might be hot there!

Emil Weckman: At the time, it’s winter in Australia so it’s not going to be that hot. It’s the first time I’ll go overseas so it’s going to be tough I think with the jetlag but that’s just the sport.

Gatedrop: You’ve signed a deal to ride the EMX250 series next year, have you rode the 250cc yet and if so how do you feel on it?

Emil Weckman: I’ve tried with it a few times, it’s pretty heavy. When the track is pretty flat I can go pretty fast but when it gets bumpy it gets difficult because of the power. I will train hard in the winter time to get used to the bike.

Gatedrop: For the EMX250 championship next year, will you have any expectations or just take it as it comes and not put any pressure on yourself?

Emil Weckman:  Na, we have no pressure with the team or stuff like that for next year. It’s just to have fun next year in the first year in the class. Then after that we will go for the top three again.