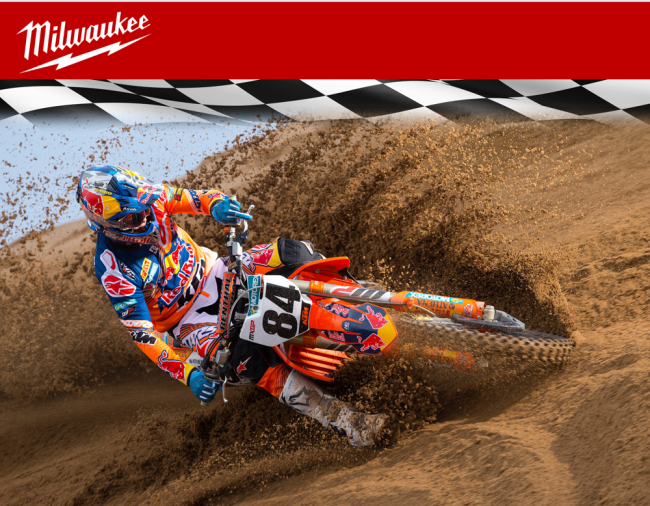 Jeffrey Herlings will be attending the Maxxis British Championship at Desertmartin this weekend but unfortunately only as a spectator after getting injured in Latvia.

Earlier in the year Herlings signed a personal sponsorship with Milwaukee and as a result will be at Desertmartin to meet and greet fans. It will be his first time in Ireland.

If the injury didn’t occur in Latvia then Herlings most likely would have been competing but never the less it’s a good chance for Irish fans to meet the four time World Championship.

We caught up with the General Manager of Milwaukee UK & Ireland, Dale Mcelveen who’s one of them responsible for Herlings visit.

Gatedrop: Dale, first of all, can you tell me a bit about you role with Milwaukee UK?

Dale Mcelveen: I am the General Manager for Milwaukee Tools, UK and Ireland and look after everything from Sales,Marketing and including Sponsorships. I am based in Marlow, just outside London and commute weekly from my home here in Northern Ireland to Marlow returning every weekend.

Gatedrop: The news was official a few weeks ago now that Jeffrey Herlings will attend the British Championship at Desertmartin, what’s the purpose for his visit?

Dale Mcelveen: We have signed a personal sponsorship deal with Jeffrey to promote the range of Milwaukee Tools, Accessories and Hand Tools globally.

Gatedrop: Was it tough getting all this arranged as he’s a busy guy back at the races at MXGP and National level?

Dale Mcelveen:   Fortunately for us here in the UK and not so much for KTM and Jeffrey.  This was quite easy to organise as his pre-season injury meant Jeffrey would not be challenging for the title this year and his diary was quite flexible. Up until last week the wheels were still in motion to have Jeffrey ride at Desertmartin, something he was very keen to do and I was keen on making it happen as having watched him on numerous occasions it is something I would have liked many Irish fans to see. However, the unfortunate incident in Kegums put an end to that and now Jeffrey will be watching with the Milwaukee guests sporting his Airboot.

Gatedrop: Do you know yet what day he will come to Ireland, how many days he will be here for and what sort of things he will be doing when he’s here?

Dale Mcelveen: Jeffrey will arrive on Saturday in Northern Ireland and once we do a bit of sight seeing the plan will be a meal and up early to head to Desert, he had previously mentioned a night out in Belfast before the injury. I had many offers from volunteers to accompany him, in particular Big Willie Barr however my concern here was I needed Jeffrey to show up at Desert and not stuck in some shabeen with Willie!

Gatedrop: Will there be a training day with Jeffrey with some of our young riders?

Dale Mcelveen: I would as part of the Milwaukee programme bring Jeffrey back to Ireland and maybe host some training days at Desertmartin for the youth however his short to medium term goal will be to get fit again ASAP so maybe over the winter months, watch this space.

Gatedrop: Is there any chance we might see Jeffrey race Desertmartin in the future?

Dale Mcelveen: Unfortunately the injury he sustained at Kegums has put a spanner in the works of the possibility of Jeffrey riding at Desert this weekend but I hope when he gets a look around he may come back in pre season 2020.