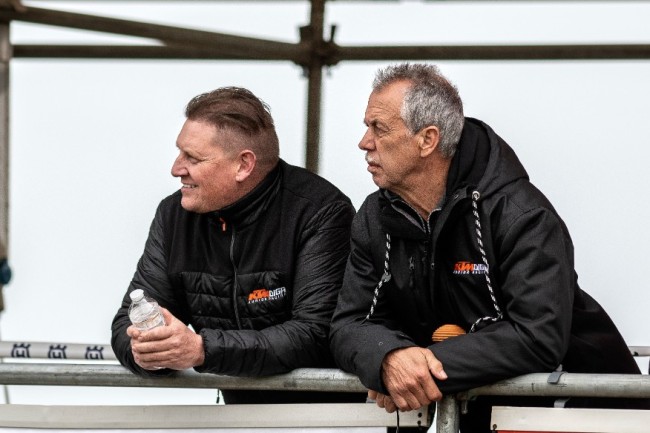 Double EMX150 champion Emil Weckman suffered an unfortunate comeback to EMX250 action last weekend in Orlyonok, Russia. A serious knee injury will keep the KTM Diga Junior Racing rider sidelined for several months. To make things worse Weckman is the third rider of the well-established Belgian squad who was dealt a serious blow this season after Mathéo Miot and Emil Jönrup. We caught up with team principal Dirk Saelen to talk about the highs and lows so typical for the sport of motocross.

The workload necessary to compete and excel remains exactly the sameregardless of the outcome. But when a rider is surfing a wave of success everyone within his team is lifted along. The KTM Diga Junior Racing crew knows firsthand what this means from the breakout MX2 GP season of Antonio Butron, over the impressive EMX250 results of Miro Sihvonen to Emil Weckman’s strong EMX125 campaign and Dutch 125cc title last year. However that same wave that will carry you can sometimes crush you.

Things were starting to look up for Weckman. He won a Dutch ONK race in Gemert earlier this month but Russia could mean the end to his season?
Dirk Saelen: “Indeed, his crash at the start of the second moto caused quite a lot of damage. There’s a crack in his rotator cuff but luckily this will heal up by resting and doesn’t surgery. Unfortunately he tore the ACL on his left knee and will undergo surgery next Tuesday in Belgium with dr. Peersman. It’s hard to accept but we know that he’ll need 4 to 5 months to recover.”

How is Emil taking all of this?
Saelen: “Of course things could be better but Emil has a lot of spirit and fight in him. He’s mentally tough and knows how to stay positive in hard times.”

This means that three out of the team’s four EMX riders are out of action. The team lost EMX125 rider Emil Jönrup with a rotator cuff injury at the end of December, Matheo Miot suffered a serious knee injury in April. It must be hard to handle that much bad luck?
Saelen: “It is tough for sure, but it is what is. The list of teams who’ve been in a similar position before is too long. That’s the nature of this sport! What’s even more cruel is the fact that never before winter preparation has gone so well to be followed by so much bad luck. Look at Mathéo: he was adapting well to his new KTM 250 SX-F, he dominated Le Touquet and won the French beach race championship. All riders were firing on all cylinders, technically we were ready for the season, the guys did well at their physical tests… Everything was in place for a productive season!”

When do we see Jönrup back on the bike?
Saelen: “By all accounts his recovery is going well. Emil was devastated because this should’ve been his year, it was his time to shine in the EMX125 class. He quickly got into the right frame of mind and has been very motivated to go through the rehab process. It will be about another 4 weeks before he can start riding again. That’s positive but we know it will take time to regain race fitness and some rhythm.”

Apart from Jönrup all EMX riders were new in the class this season. It’s hard to chase results for any rookie learning the ropes.
Saelen: “Perhaps you can call that a risk. Normally you would pair a novice in the class with a rider who has one or two seasons under his belt in that category. However we felt with the potential of each of these rookies they had the abilities to be solid and learn a lot. I think it’s safe to say that Kay Karssemakers hasn’t been as consistent in EMX125 has he or we would have liked. Still you feel that his making headway all of the time. His speed and confidence are improving, he’s winning and collecting podiums domestically. Kay is hard-working and determined. It will only be a matter of time before he’ll turn things around in the European series too. He’s putting unnecessary pressure on himself in qualifying but in a racing situation he already has that top-10 speed.”

What about giving fill-in riders an opportunity
Saelen: “I’m all for it but in the end it’s a bit more complicated than it seems from outside. First of all finding relevant riders -who can get results- who are free of obligations during the season is always tough. Second of all, we need the right fit in terms of attitude. By that I mean riders who’re willing to do the work, follow our program and commit themselves. Just showing up is not an option. A lot of young riders are stoked to be in a team or race the EMX series. That seems to be by far the most important. They’re not ready to bring any sacrifices. And that’s not what we’re about!”

You‘re also fielding a rookie in WMX in the form of Aussie TJ O’Hare who’s paired with the more experienced American Avrie Berry. It seems both have quietly been building momentum lately. Avrie just won the first two rounds of the Canadian triple Crown series.

Saelen: “True, I think both Avrie and TJ had expected more from the first two WMX rounds. However they’re working hard to rebuild. In the last few weeks we have stepped things up with TJ’s riding program and she really impresses me in practice. She’s very driven and made a lot of progress in the last month or so. TJ has been riding a lot with Steffi Laier (ed. current EMX Women’s series leader and three-time world champion) lately and that’s starting to pay off. We’re really excited about the next races for the girls.”

How is it as a team to deal with adversity like you had to this year?
Saelen: “I won’t sugar coat things, it’s difficult in a situation like this! All team members and sponsors are working towards the same goal: to let our riders perform at the best of their abilities. Not being able to fight because you can not race is the worst feeling. Luckily, we’re blessed with an incredible group of people. Faced with hard times everyone is working even harder to turn things around. I’m super grateful for everyone who contributes to this incredible journey. We have a very solid pool of partners and staff and I can’t thank them enough!”

Thank you for your time and good luck for the EMX Women’s final in Arnhem this weekend!
Saelen: “You’re welcome, thanks!”