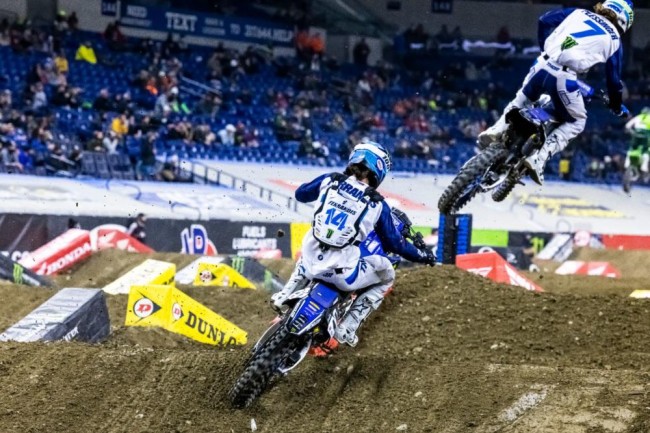 In their first year as the factory 450 team, Star Racing Yamaha are doing a tremendous job with riders, Aaron Plessinger, Dylan Ferrandis and Malcolm Stewart all in the top ten of the supercross championship and all podium contenders.

We caught up with team manager, Jeremy Coker, to discuss the season so far and the purchase of Ricky Carmichael’s GOAT farm!

Three big name riders and running the new factory Yamaha team, was that a daunting task to get organised with material, budgets and adjusting to each rider’s bike settings etc for the new season?

Jeremy Coker: I would say the biggest tasks were figuring out what had to be done to the bike in order to turn its reputation around. That being said, the main focus was weight reduction and we succeeded with that.

Aaron Plessinger just had a brilliant ride at Daytona, he has shown. flashes of that speed all year, but it must be great to see him back on this level? Has working with people he knows again been a big factor or what has made the difference, he looks like a different rider now compared to his first two seasons!

With Aaron we always knew he had it in him, unfortunately he had a rough two years but we were able to get him back. All it is with him is just being around guys that he knows and trusts.

Dylan and Aaron seem very comfortable on their bikes now, with Aaron saying he has been doing a lot of testing, how much work has been going on since the season started to further dial in the machines?

When it comes to testing it has been hard with the schedule of racing we have, once we finally had a week off we were able to address some key issues and our Daytona results proved we did a good job.

Malcolm Stewart showed a lot of raw speed a couple of years ago and consistency last year but he seems to be combining both aspects this year! How impressed have you been with him adapting to the new bike and new team? Do you feel there is still more to come from him?

When it comes to Malcolm all it was is to be on a solid program that can hold him accountable. The good thing he was already training with our team trainer but it was hard since he didn’t ride with our guys. Now that he is on the full program it is a big difference.

Dylan has had a bit of an up and down start to the year although his speed has been good especially recently, however his starts seem to be letting him down at times. Is that a mental thing or something you guys can look at with the bike and practice starts? His qualifying times have been great lately!

When it comes to Dylans starts, yes, it is a lot mental. Being on the line in the 450 class is scary, look to the right. look to the left it’s all past champions. Once we get him to believe he belongs he will be fine.

The clash with Malcolm and Dylan, was that a bit of stressful time for you?! And are they both okay with each other?

The clash was never even spoken about.

The team have bought the GOAT farm off Ricky Carmichael, how long has that been in the works? Will that replace California as the main testing base or is the plan to have both California and Florida for testing in the future and what advantages will Ricky’s place give you?

Yes, we purchased the Farm and are in the process of building a complete shop and facility there. It will be ready for us to move into after the outdoor season, once we move there that will be our new home base.

At the halfway point in the season, Malcolm is fifth, Aaron seventh and Dylan ninth, all three in the top ten and all capable of podiums, you must be really happy with how your first season has gone as the factory team? To me it’s really impressive!

Yes I am very happy with where we are in points although I do believe we should have more podiums and we still have plenty of time to do it. The team goal was 10 podiums between all the guys and now we have 2 so 8 to go. HAHA!

Christian Craig has been practicing on a 450 since the last supercross, is there a chance  he will be racing one outdoors with Malcom being on a supercross only contract?

Christian is testing for us to get ahead for the outdoor season, there is a chance he will be riding, YES.

On a personal level, how has it been going from engine technician to team manager? What have you enjoyed most and what has been the biggest adjustment?

Yes, I was the engine technician on the 250 team but also shared many other duties between Brad, myself and Wil so not to much has changed for me except the official title.