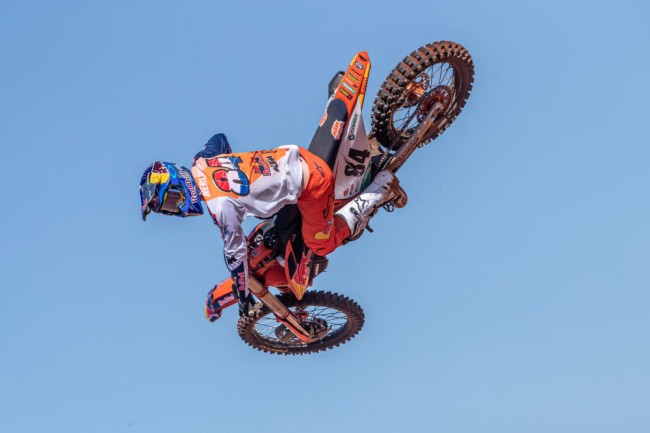 A Red Bull KTM Factory Racing rider since his Grand Prix debut in 2010, Jeffrey Herlings has been one of the team’s best and most emphatic racers with four FIM Motocross World Championships and 90 victories to his name; the third highest total in history. After his near-perfect third season in MXGP with the KTM 450 SX-F in 2018 – in which he claimed 17 from 19 GPs and finished as runner-up in the other two – the Dutchman suffered two years of injury frustration. Now, at the age of 26, #84 is again looking to establish his superiority at the peak of MXGP.

Jeffrey, are you finally healthy? No more metalwork in the body or difficulties for fitness?I don’t have any material left in my body anymore, luckily! My foot is definitely better than it was but it’s not fully healed or as good as my other one. It bothers me a little but not when I’m riding. I sometimes have pain afterwards, that’s all. Physically I am not super-conditioned but, at this time, I don’t want to be anyway because we are still not 100% sure when racing will start again due to the pandemic. Hopefully we are set for mid-June but it is mentally and physically tough to know when you might or might not start. Right now, I’m just riding three-to-four times a week and every day do one – or maybe a maximum of two – training sessions to stay in shape and keep the body weight under control. When we’re absolutely sure of the first race then we’ll go hardcore again.

You have an insatiable appetite for victory but after the injury problems of 2019 and 2020 is part of your motivation just to reach the end of a season? Obviously the last couple of years I didn’t succeed in completing most of the races, so that has to be a big goal for me. I have to be [present] everywhere and I don’t know if that means I’ll be close to the front each time, as has been proven in the past, but if I can try to be consistent every time I’m in the gate then I’ll hopefully be around the podium spots at the end of the year.

The Dutch GP is supposed to take place in Oss, Holland. What’s your opinion? Before we talk about that I think it’s a shame we’re not going to Valkenswaard anymore. It was a tradition on the calendar. I raced there since 2010, I won there nine times and was on the podium ten times, so it has a place in my heart. Oss is a nice track. It’s close to my house! It’s not a typical ‘Dutch’ track in that it’s not super-sandy but it’s a cool place and good for the fans with a nice overview for watching.

Who will cause a surprise among your rivals for 2021? I think it will be the same group of main riders, it’s just a different year. I think Jorge Prado has joined the party now but basically the same guys like Tim Gajser, Romain Febvre, Tony [Cairoli].

You could get a bit closer to the all-time win record of 101 this year. Will that be another small objective? Definitely. If I have a season like 2018 then I’ll pass it this time! That was a dream season. It’s certainly a goal to reach that 101. I’m on 90 now and I’m 26 years old so I think it’s realistic. I’ll have to go for it.

You are the best sand rider in the world: is it possible to get even better in the terrain? No matter how old you are, you keep on learning and you find little ways to improve – but – I don’t think I can get better in the sand. 26 is not old but also not young and I can’t see myself increasing my level. I’m either at my peak now or I passed it! In 2018 I was not at my best-level but I was super-good in the sand and pretty-much won everything. So, I don’t know if it’s possible to be better…but if I can stay at the same level then I’m already happy.