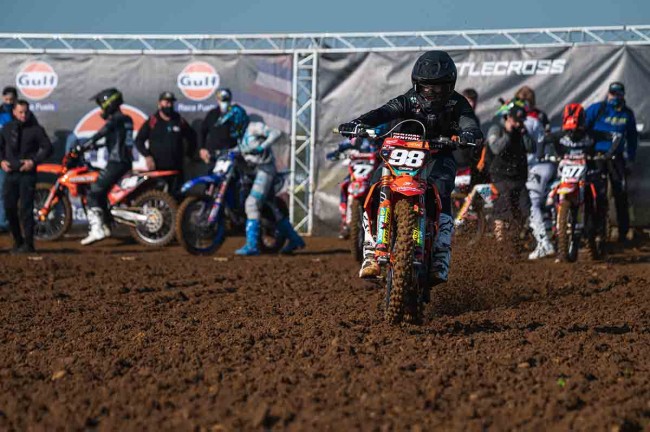 Hitachi KTM fuelled by Milwaukee rider Bas Vaessen was competing in the first round of the 2021 ACU British Motocross Championship at Culham on May 01 when he unfortunately crashed in the early stages of the opening MX2 race. The race was red flagged to allow the medical team to attend to his injuries and once he was stabilised track-side, he was transferred to hospital in Oxford. The team wish to offer our sincere gratitude to RHL Activities and their medical team at the event for the very caring and professional way that the incident with Bas was handled. Team manager Bryan Connolly and Stephen Sword (team rider coach) are also to be commended on their swift actions to ensure that Bas received the best care and attention that he required at the track.

Initially Bas was in the ICU in the hospital for a number of days and made good progress, which subsequently allowed him to be moved to the medium ICU ward. Since then, he has improved further to be in his own room where he also goes through his daily physiotherapy. The doctors are pleased with his progress to date, which has undoubtedly been helped by his high level of fitness. His rehabilitation will continue on a daily basis, with a future move to a specialist spinal rehab facility when the doctors determine that the time is right to do so.

The past 10 days has also been challenging for Bas’ girlfriend Bente, Mum and Dad, who have all been by his bedside since he was hospitalised. The effect on all of the team, our sponsors and Bas’ many other friends and fans has been very evident by the many supportive messages, emails, phone calls that everyone has received from all parts of the “motocross family” throughout the world.

Further press releases and social media information will be issued when it is available.

A further update has also been just released by the Vaessen family on social media:

“Again a little update on the improvements of Bas as per today.

“Bas has been removed from the high intensive care to a normal ward on the Neurology department in Oxford. This means his vital body functions are well under control.

“The crash in Culham resulted in 4 broken vertebrae in his back as well as spinal damage in C3 as well as C4, the latter causing serious disability problems.

“Since past weekend he gets therapy on a daily basis and he surprises the doctors with remarkable improvements. He can move his feet and hands a bit, left side is better than right side and he has feeling throughout his body. Which is sure enough a good sign. Rehab will take a very long time, however.

“This means we started up the procedure to repatriate him to a spinal rehab center, this will take some time due to COVID, Brexit, MRSA and such. The facilities in Oxford are excellent, for which we are grateful, but closer to home would be nice.

“We are also grateful for the support we receive from the team, sponsors, the MX-society, friends & fans. Your thoughts and messages are greatly appreciated.

“He cannot use his hands actively, so he cannot reply to the many kind messages he receives.