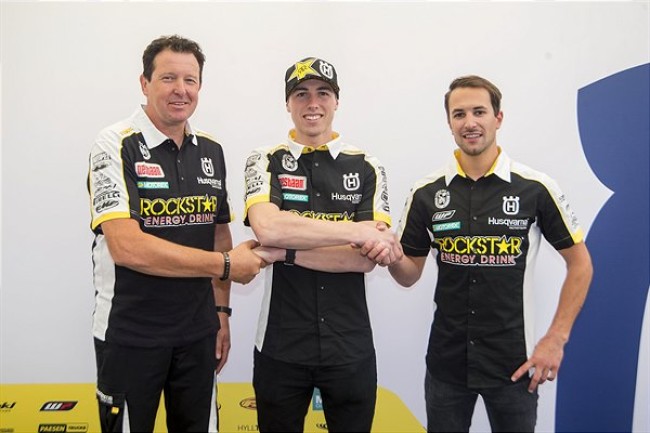 After coming all the way from Tasmania, Jed Beaton was proving a revelation in 2018 in his first full season in MX2 world championship motocross.

The Aussie was putting his F&H Kawasaki amongst the factory boys week-in, week-out and even getting a podium while being top five in the championship but it all came crashing down, literally, at the British GP.

Beaton’s Kawasaki endoed horribly on a big jump and he was forced to jump off the instantly nosediving bike, breaking both legs. It was a painful and cruel blow for the Aussie who had been riding so well up to that point and was now, in the blink of an eye, out for the season.

But things are looking up again for the quietly determined Beaton, his early season performances earned him a factory contract with Rockstar Husqvarna and he is recently back on the bike and beginning his preparations for the 2019 season, which will include a pre-season race at the Hawkstone International.

We caught up with Jed, who gave us his thoughts on the 2018 season, the dedication it has taken to get a factory ride and his hopes for 2019.

I guess we will start with the 2018 season, it was your first full year in the MX2 class, you were really quick and had great results until your injury. Were the results what your expected and how devastating was the injury mentally as well as physically?

We put in a big off-season so we were sort of expecting to be inside the top eight to start with. Then we were top five at round one and I think we held fifth in the championship until I ended up breaking my legs. I felt my results were quite good for my first full year in MX2. I felt like I learned a lot, the biggest thing was learning the speed in the first three or four laps and then being able to hang there the whole time. At the start I wasn’t really capable of doing that but by round five I felt like I was able to do that and felt if I got a start it would happen.

I proved in Portugal it could happen (podium) and at the British GP where is broke my legs I felt really good too but I was disappointed with my results even though they were quite decent. I felt like it was coming, I was building good confidence and knowing that I could do it, then I ended up having that injury so it was quite frustrating, but there is not much I can do about it now, so just looking forward to next year.

Beaton was flying in the first half of 2018 until his injury Pic: Shot by Bavo

It was a pretty big and scary crash – were you thinking the worst in the air?

Yeah it all happened very quickly, I was taking off the up ramp and my bike was half upside and I was jumping off. I was quite scared when I jumped off, I didn’t really know what was going to happen and I was just thinking, ‘ohhhhh,’ I didn’t know what to think, then I hit the ground and the first thing I thought was get off the track so I wouldn’t get landed on, then on the side of the track I realised I had two broken legs, it wasn’t the best things going through my head at that time.

It was quite difficult because I was still trying to figure out what I was doing but before that crash I ended up signing so I had a little bit of pressure off there. So it was just mainly focusing on my recovery so I could be 100% when I was back riding, It has all gone well so far. I think I spent four and a half or five months off the bike. Before I came back over I was doing some physical training at home and I’m fully back into that now. I think I have been on the bike for nearly four weeks now.

So it’s going along quite well, I enjoy riding the Husky, it’s a really good bike and everything is great so there is a lot of positivity now for sure.

And the team seem to have a very good structure around the riders with, have you notice that as a good benefit as well as obviously being on a factory machine?

Yeah of course, they have a group set-up and Rasmuss Jorgensen as the team trainer, it’s quite easy when everything is planned for you and stuff like that, you know when you don’t ride and what days you are training. That just makes it a fair bit easier and obviously having factory equipment too. The first time I rode the Husky it was pretty impressive so I am looking forward to getting out there and racing it next year.

The video the guys made of you on your life showed how difficult things have been for you. You didn’t get anything handed to you and had to work to get every step you have been. You are now a factory GP rider, that is a pretty big accomplishment before the season even starts, you must be proud of having got this far.

Yeah for sure, when I was four or five-year old growing up in Tasmania, we lived in a house with no power and stuff like that, I always dreamed of coming over and being a GP rider but the thought of it happening, I didn’t know if it was going to pay off or not but I just worked really hard and sacrificed. I had support from my family and girlfriend to come and do it, just try to make it happen. I stuck to a plan and ticked some goals and to be on a factory team now, I am happy to look back and realise I stuck to it and dedicated pretty much my whole life to come over here and do it. It’s quite a good achievement for myself, I’m happy to be a factory rider, now I have to put everything together and come back stronger next year than I was this year.

Next season, Prado is probably going to be the guy to beat again, he showed his speed along with Ben Watson and Hunter were the GP speed was compared to the Americans, was it good for you to see the level the GP’s have and show you how well you were going before your crash as well?

Yeah for sure, it’s quite hard to watch a race and then figure out where you would place in a race. It was good to see the pace over here is quite high, I enjoy Europe a lot, I am planning to stay here, I like motocross a little bit more than supercross, obviously I haven’t spent a lot of time on a supercross track so I am more comfortable on motocross.

I really like the GP scene and everything like that, everything is getting set-up here, I have my own apartment and just little things like that makes life a little bit easier and less stressful.

For Australians, a lot of guys eventually end up in America, I guess the way of life is similar, no language issues and you have supercross and motocross there. How difficult was it for you adapting to living in Holland or Belgium, enduring the harsh winters, and dealing with all the difficult countries and languages in a world championship?

I think the first four months it was quite different for me, in Australia we didn’t really have that much sand and then living in Holland everywhere you rode was pretty much sand, I think there was one hard pack track we could ride. That took a long time to get used too and obviously the language barrier took a while, it’s not too bad because everyone around here pretty much speaks English or at least knows it, so you can get around pretty easy without knowing their language but now I’m starting to pick up their language a bit and that’s also making things a little bit easier too. Little one per cent things make you more comfortable here, it’s good I enjoy it, there is no point leaving something you enjoy.

Just on the Des Nations, Australia were impressive again, and with Jeff Lawrence still to come through, yourself fit again and a couple of other guys who are quick in Australia, it is looking good from an Aussie standpoint, how you guys must be excited for each Des Nations now with a lot of top riders coming through.

Yeah we produce good riders out of Australia and I think now it’s only just getting seen with people getting opportunities for over there. I think when Hunter came here at a young age, that opened up a few doors for Australians. I ended up coming over and doing EMX, I didn’t get that great of results but this year they got better, obviously Jett is really fast, he came over young and it’s good that we now get the opportunity because there is fair few good riders there, if they get the right opportunity and right equipment they can do really well. I’m excited and hopefully we have a good chance at getting a podium there in the near future which would be really awesome, we have good riders and different variety of riders who have a good shot at getting on the team, it’s is looking good for Australia at the moment so I am pretty pumped!

Just on your own personal goals for the season with your first year on a factory team you must be very motivated, have you changed your goals for this season?

Not really, nothing really changes we just go and do our work before the season starts, obviously you go to the first round not knowing where you stack up. I think anyone that has done the most hard work should be up there, you just have to work as hard as you you can in the pre-season, you will see where you are at the first round and manage it from there. Coming back from a big injury, the goals aren’t through the roof but they are definitely there. I put a lot of hard work in and if I don’t acheive the results then I am pissed of with myself, the bar is not set too high. I definitely want to go out and do well.

And finally, you are racing the Hawkstone Park International on the 17th of February what are your thoughts at racing there?

Yeah it’s always good to have a few Gatedrops before the first GP, I think it’s really important to do a pre-season race. I went over last year and I quite enjoyed the track, it was a difficult track but it was fun so I am looking forward to that, it will be my first race with the team so I am excited about that, it should be really good.