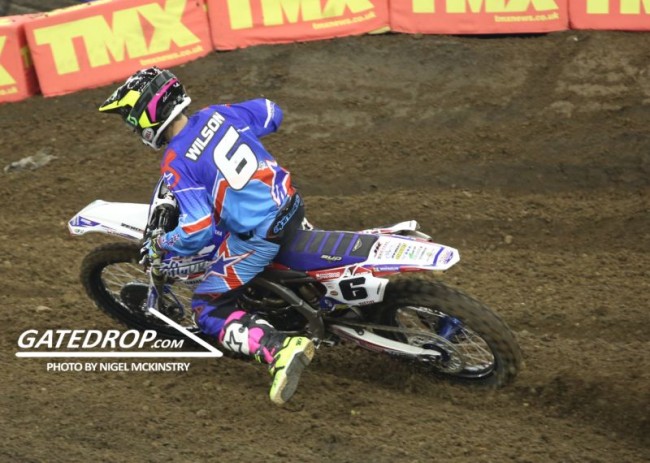 There are plenty of Australian’s that will enter the GP paddock and Jay Wilson is one of them. The I-fly JK Yamaha team originally signed him to just compete in the Arenacross UK series. However, James Dunn has left the team which meant they had a world championship ride up for grabs.

We decided to catch up with the Aussie after two nights racing the Belfast AX where he was able to make the final for the first time.

Gatedrop:  A solid weekend for you making your first Friday and backing that up with a fifth tonight, you must be happy with the progress?

Jay Wilson: Yeah, for sure. It has been a massive, massive learning experience and I have had to learn really quick. The tracks are brutal, they’re hard to pass on, they’re not technical but everyone is the same speed. It makes it really tough you know. I feel like I have a lot more speed to show and I felt like I had that tonight. The last few rounds I have been trying to get more comfortable and with the new people too and everything, it’s be a learning experience.

You never really know where you are at and you see a lot on the internet with the racing and stuff like that. Then you get over here and the first round was just a massive shock for me. But, I feel good and I feel like I have more to show, it’s just putting myself up front to show that. I’m not the best qualifier so when I’m not qualifying good it means I get a bad gate pick and it sets it up for a bad night. I really need to work on that and especially heading into the GP’s and the British Championship.  I know I need to work on qualifying because it’s so important.

Gatedrop: You have experience racing Supercross back home in Australia, just how different is the British Arenacross series?

Jay Wilson: Massive! We are punching out nearly fifty second lap times and twenty laps back home in Australia. I come here and it’s really short but it does create a great atmosphere with short, intense racing for the crowd but to be honest it’s hard to show the skill I have, or the other guys have on small tracks because anyone can go fast for five laps on a twenty-five, thirty second lap time.  It’s fun and I have really enjoyed my time here. It’s something that I would definitely like to do again in the future.

At this point in time I am grateful these guys gave me the opportunity to come over and do something because at the start I didn’t have anything. I get to travel the world racing a motorbike, I can’t ask for much more than that. This is what I have always dreamt about as a kid and I have worked so hard my whole career. I kept fighting to come back from bummer deals and stuff like that, people keep putting me down but I keep coming back. I wanna show what I can do and what I am capable of, I’ve got a small group of people that believe in me. I think with the people that I have in my corner heading into the GP’s, it’s going to be completely new just like the Arenacross was for me, but as you can see I have started doing well now. I’m starting to get a feel for it and I think that will be the same with the GP’s. My lifetime goal has always been to race GP’s, this is where I want to be and I want to be a world champion again. I’m going to do everything possible to try and be World Champion again one day, that’s all I wanna do.

Gatedrop: Hunter Lawrence rode the EMX250 series in 2016, did you ask him about what life is like in the GP paddock and what did he have to say about it?

Jay Wilson: To be honest, it’s all happening so quickly at the moment and we have so much stuff going on. I haven’t got a chance to speak to Hunter but I spoke to my family as obviously it was a big decision to come here. My fiance had to go back home as she works with the media companies back home but we have a baby on the way as well so it’s just a hectic and hard decision. She wants to see me live my goals and it makes me emotional but this is what I want to do and she backs me 100%.

We are taking it one step at a time and its short notice but we will keep chipping away and I’ve got to learn, I understand that. I know I might not go out and set the world on fire at the first few rounds but I want to be there every round, improve and be injury free at the end of the year. I want to learn from this, have fun and be happy riding a motorbike because last year I just wasn’t happy riding a motorbike and I ride a bike to keep me happy. That’s why I started and it’s enjoyment, that’s the way I want it to be.

Gatedrop:  I believe you were in Italy testing the I-Fly JK Yamaha 250 before this event, how did it go for you out there?

Jay Wilson: I flew out to Italy and only did one day out there so it was a really really quick turn around. I only got about half an hour on the bike and then I had to jump on a flight back to the Arenacross. It was really short notice but what I’ve seen so far the bike is solid. At the moment that was just a base setting for where we are at.

Like I said it was short notice so I’ve missed two months of pre-season testing and stuff like that. I think we have a lot of work to do but from the base setting I think we are in a pretty good position. We can only improve from here and I have a good group of people around me. They know my situation back home and stuff like that, they back me 100% in anything that I do.

Gatedrop: Before Qatar, do you have any plans to compete at any motocross races to prepare for the season?

Jay Wilson: At this stage we are planning on doing Hawkstone International this weekend. I don’t honestly know what I will be riding there. We have some engines and stuff this week to try out. I’m not planning on going there to set the world on fire. It’s going to be practice for me to be honest, I’d love to go out there and run with those guys for a little bit.

A lot of GP guys are going to be there so I think for me, it’s important for me to be there, take it all in and get my feet wet a little bit. I have to bare in my mind I haven’t been on the bike racing motocross. I spent an entire season on the 450, stepping back to the 250 has been good, I think we have a solid engine package. I’m excited and I’m just going to take it day by day.

Gatedrop: Have you got any specific goals of what you’d like to achieve in MX2 this year?

Jay Wilson: I mean I have got personal goals but at the moment everything is touch and go with getting everything setup. I have my goals, short-term, long-term and lifetime goals. I’ve ticked off one of them already, it’s been a big change coming over here a few weeks ago. From not having a ride at all to this, I was planning on going back home to work so I’m really going to enjoy this and just learn. I have got personal goals I want to achieve but I have to be realistic about it.

Gatedrop: There’s an under 23 age rule in the MX2 World Championship which means you will only have one year on the class. Does that put the pressure on you a bit to get good results to secure something for 2018?

Jay Wilson:  I mean I’m just taking one year at a time these days. When I was younger I always used to worry about the future and this year is going to be a big big year for me and my fiance with the baby on the way. If some people can see what I am capable of then I think that can set me up for something later on down the track but at the moment I am taking it one step at a time. I don’t want to get to far ahead of myself, it’s the start of 2017. I will worry about the future at the end of 2017.

Gatedrop: You’re an ex Junior World Championship, that must be one of your best achievements to date?

Jay Wilson: Yeah, definitely. I was fifteen when I won the FIM Junior World Championship on the 85cc. Like I said I want to be a world champion again, I’ve done it before. I’ve raced Seewer and all those guys who have been racing the GP’s for such a long time now. I’ve done it once before and in the future I think I can do it again, not many Australians have done it and I want to prove a lot of people wrong. A lot of people doubt me and to be honest I don’t really care what anyone thinks these days.

Gatedrop: You’ve worked with Josh Coppins in Australia, what’s it like working with him and how has he helped you?

Jay Wilson:  Yeah, he’s amazing. Josh is a massive massive help to me. He’s such a great role model and I think that everyone sees in Europe and stuff that he’s just an awesome guy. He’s been a massive support to me. I can tell you right now that I wouldn’t be in the position that I’m in now without Josh backing me over the years. I’ve got no words for him, he’s been the most amazing guy to me. Like I said, the small group that I have around me with Josh and my old mechanic, Matt Ward back home, my family, my fiance, and just everyone, I owe it to them all. We are going to do big things in the future I feel, I don’t want to get too far ahead of myself just yet.

Gatedrop: Last question, with Herlings moving up to the MXGP class, who do you see as the main guy and the favourite for the MX2 title?

Jay Wilson: I mean, Jeremy Seewer proved this year that he is strong when Jeffrey wasn’t there. I think there are a lot of young guys coming through at the moment that can be solid. It’s just whether they can stay injury free, it’s a long season and anything can happen. With the speed that the guys are pushing these days, it just takes one small mistake and the season can be over. It’s going to be tough and there are a lot of guys that can be there at the front.