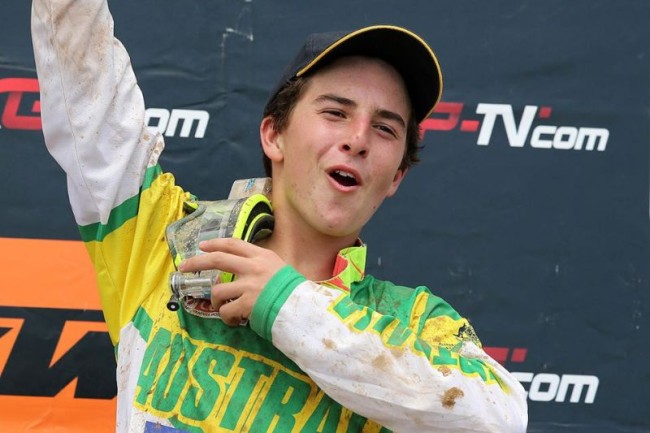 Last week Kawasaki Racing Team made the announcement that they have signed two youth riders for the season as they plan to take on youth in a bid to get them prepared for the World Championship. After a recommendation from Ben Townley, they decided to sign both the Lawrence brothers from Australia.

Both the brothers have represented their country at the Junior World Championships and have caught more than a few eyes with some good performances. They will both now make a big move and move from Australia to chase dreams in a bid to be World Championship winners some day.

Hunter will compete in the EMX250 championship as well as the Dutch ONK championship as he will have a steep learning curve with the deep sand at the Dutch tracks. We catch up with Hunter to discuss the big move with him!

Gatedrop: So the move, what’s going on? It’s a big step for you to move across the pond for you and your brother, tell us more about the deal and how it got sorted?

Hunter Lawrence: Yes, it’s a very big deal moving countries that’s for sure, we are selling our house and moving across to Belgium. After the JWC in el molar, Spain we received messages from the team and from then onwards we were just chatting back and forth about the deal and we worked out deals for myself and younger brother! From being in contact with the team just through the phone they seem like great people and such a good team and myself and Jett look forward to representing them!

Gatedrop: Brothers in the same sport doesn’t happen to often, I guess you have the Stewarts, Musquin etc. Will/Does it make it an easier transition to move knowing that you’ve got someone to train with and knows you etc?

Hunter Lawrence: Yes, hopefully we can be like the stewart brothers and be as successful as them but it does make the transition a bit easier bringing my family over with me so that I have people I love and care about and who support me 110%! Training with Jett is good as there’s always something we can learn off each other even if he is 4 years younger than me (laughs).

Gatedrop: Moving to a programme like to team green for both of you must be massive thing as it’s were Villopoto, Searle etc all started off….

Hunter Lawrence: Yes for sure! As a kid I always wanted to be on the team green program. My biggest childhood dream was to race on mitch paytons pro circuit Kawasaki team in America but that was before i started to dream about Europe! I’m glad that myself and Jett get to go to what I think is one of the best teams in the world!

Gatedrop: Racing with Mewse & Prado in the Junior Worlds and knowing your pace against them, does this give you some confidence going into 2016?

Hunter Lawrence: Yes, it is good racing them at the junior worlds and then when I come back knowing I will race them again is great.  I love racing with them and battling with the European riders, it’s just awesome.  Yes it does give me confidence knowing i can run their speed but obviously I am trying to beat them (laughs).  So a lot of hard work to come from me as they are great riders!

Hunter Lawrence: Yes, it is a good feeling that he even knows who I am! Half of the factory team managers in Australia don’t even know the up and coming juniors so for a guy at his level to recommend me is a really appreciated move and I thank him heaps! Josh Coppins another legend who has helped me out a lot this year before junior worlds so I want to thank him a ton too!

Gatedrop: Has it always been your dream to come over and race the World Championship in the future?

Hunter Lawrence: Yes, it has from the first time I ever came to Europe when the junior world titles were in Italy back when I raced a 65! I love Europe and how everything is run. I am looking forward to be racing it full time and not just racing at the junior worlds and then flying back home to Australia!

Gatedrop: How was it to represent Australia at the JWC, did you learn much from the other top riders both times you have did the event?

Hunter Lawrence:  My starts,  my starts, my starts, nope didn’t learn much…. (laughs). Yes, I learnt a lot every JWC trip that’s for sure.  It is such an awesome experience! I have represented Australia 5 times now so every trip I’m always learning more and more and i love it!

Gatedrop: What country will you be based next year?

Hunter Lawrence: We are looking to be based in Belgium.

Gatedrop: Have you got any advice from Ben Townley about to adapt and get used to things in Belgium?

Hunter Lawrence: I haven’t had much to do with Ben Townley but Josh Coppins is my guy for advice, so far I have worked with him and learnt so much. In only the two weeks I stayed at his farm so I go to Josh for advice with the whole living and just any questions about Europe really, I think he knows what he’s doing and he is a smart man! A good bloke that’s for sure!

Gatedrop: What are your goals for next year?

Hunter Lawrence: Next year I want to learn all the tracks and just learn the race craft as well as learning the lifestyle but i am looking to do everything i can to prepare for mx2.

Gatedrop: It will be a big change for you and your family, was it a tough decision to make the change? Are you excited/nervous about moving away from Australia?

Hunter Lawrence: A very tough decision that’s for sure but it is an opportunity of a life time so I think we couldn’t say no! We all are excited to move because it is Jett’s and myself dreams! So our family is supporting us which is great.

Gatedrop: I see you will be racing the Dutch championship, have you any experience in the sand and is it something you are keen to learn?

Hunter Lawrence: Yes, it should be awesome I ride a lot of sand here but the sand in Europe is very different!! So I look forward to learning it, I know it will be very tough but I am ready to learn the hard way!