Cairoli: Herlings was more motivated to get the win! 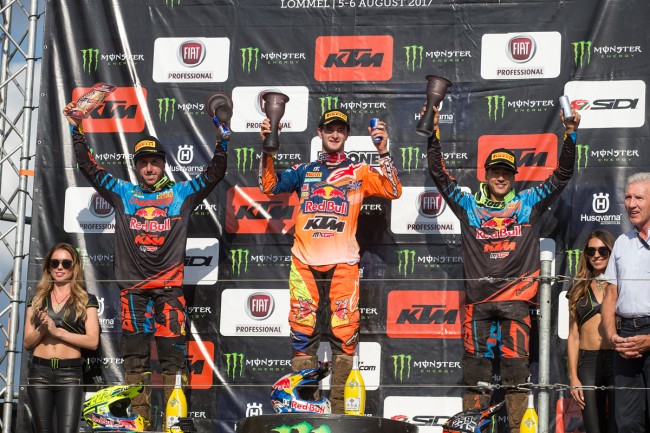 Much talk of the Grand Prix of Belgium revolved around Red Bull KTM Factory Racing teammates Tony Cairoli and Jeffrey Herlings largely due to their pedigree and results on sandy tracks and a compelling duel that occurred in the ‘soft’ terrain of Ottobiano, Italy in June with their 450 SX-Fs. Herlings set a mean pace in Free Practice, almost three seconds quicker than the MXGP standings leader. A top ten start in the Qualification Heat was not a deterrent as Herlings soon worked his way to second place and squashed Cairoli’s five second lead to nothing with two laps remaining. It was exciting stuff: Herlings on full-charge and Cairoli making several small errors that gave the Dutchman hope. Herlings seized the lead on the last lap for his second Pole Position of his debut MXGP year and the stage was nicely ‘lit’ for the thirty-minute and two lap motos on Sunday.

The strong rain showers of Saturday that swamped sections of the sand and helped roughen the surface further were thankfully replaced by warm sunshine for race day, and a crowd of 30,000 (weekend figure) found places around the sandy venue that is a well-used and well-known training location for many of the Grand Prix elite. A reversed and altered layout for the fourth Belgian GP at Lommel helped offer a fresh challenge to the riders that would already be pushed to physical and mental limits (as well as those of their machinery).

The first race saw the third member of the crew, Glenn Coldenhoff, produce his best moto of the season so far with an excellent start and leading the first four laps of sixteen. He then followed Herlings’ superior pace for the midpart of the chase and was passed by a conservative Cairoli. As Herlings dealt with some arm-pump to remain free and claim his sixth race win, Cairoli made a mistake late on and crashed, handing second spot briefly back to Coldenhoff but soon recovered. The KTM trio ran ahead of Jeremy Van Horebeek by fourteen seconds in a dominant show.

The second race permitted Herlings and Cairoli to renew their dispute. Several close exchanges for the lead and some cat-and-mouse games ended in the last ten minutes as Herlings forged a gap and Cairoli accepted 22 points for second place and to safeguard a hefty window in the standings (now over Herlings who has moved up from third). Coldenhoff was again strong and found a way past Clement Desalle to capture fourth position; the classification allowed #259 to walk the podium for the second time in 2017 and give KTM a historic sweep of the premier class rostrum.

Herlings: “We messed up a bit in Ottobiano. I never like excuses and Antonio won fair and square there but I was a bit sick that weekend. So I had something to make up [at Lommel]. He got the better of me there and I won here; home crowd for him and also for me but I’m super-happy and I want to thank Red Bull KTM because they have put in so much effort and work and to go 1-2-3 in both classes wouldn’t be possible without a great team. They are always behind me and I feel blessed for that. I won yesterday, won both motos today and even had a pretty good start in that last moto! Five races to go and the season is done. We are second in the championship now and it would be great to finish that way.”

Cairoli: “It is amazing to have six KTMs on the podium and [see] what this manufacturer is bringing to the sport. I’m really happy and big congratulations to all the people behind the scenes who help us. I’m very happy with the race. For sure Jeffrey is one of the fastest in the world in this type of ground. We had some good racing and Glenn was also very fast in the first moto. We are almost near the end of the season so we have to think about the championship now and it is time to look at the points and not do crazy stuff. We had some good battles in that second moto but for sure he was more motivated to get the win so congrats to him. Switzerland is one of my favourite tracks so I’m really looking forward to this race.”

Coldenhoff: “It’s a been a while! I had a good weekend and I felt really strong coming into this GP after some very competitive days [practicing] in the sand. I messed up my start a little bit yesterday and it was a tough day with the rain but I fixed that for the first moto today and gave myself an easier job. In the second one I was thinking of the podium from the second lap because I’ve been working hard for this together with the crew. We made a great plan after Loket and it worked out.”

Before Lommel Cairoli had a 92 point lead with just 300 left to win this season. After the two motos in Belgium the scenario has changed to a 99 point margin for the Sicilian over Herlings (with 250 left) as the KTMs move 1-2 in the championship. Coldenhoff has moved up to tenth.

MX2
As in the MXGP class, the Red Bull KTM MX2 crew also played out a preview of the Grand Prix motos on Saturday. Jorge Prado assumed his usual role with a qualification heat holeshot and early lead around the wet sand but Pauls Jonass followed and soon took control for his sixth Pole Position of the year; double the total of the next nearest rider.

The demands of the sand meant that starts at the front of the pack were less crucial but the KTMs were still prominent at the peak of the MX2 gaggle as the first moto roared into life. Sunny skies were a welcome addition to the GP patchwork and Jonass set about chasing Prado again as the Spaniard danced through the sand and fronted his peers. Jonass edged through on the eighth lap of sixteen and faced opposition from his teammate. The Latvian was able to keep ahead and classified in the top three together for the sixth time in 2017.

The second moto started dramatically as Jonass became part of a pile-up on the second corner. The twenty year old retrieved the 250 SX-F and set off in last position. His race rhythm was nothing short of spectacular as he picked off twenty-seven riders to reach the top five and secure second overall. Meanwhile Prado had made another exemplary start. The sixteen year old had his very first taste of MX2 racing at Lommel in 2016 but could not complete the practice and qualification programme due to a shoulder injury (the situation meant a full debut at the Grand Prix of the Netherlands at Assen a month later and a sensational maiden podium result). Today was therefore his first full blast of the well-known Belgian course at MX2 race speed and he excelled to ride alone and win his second moto of the season and another GP win after succeeding at Arco di Trento in Italy back in April. LRT’s Julien Lieber toasted a fine third place at his home fixture.

Prado: “I’m feeling happy. It is hard to win a GP! Everyone goes so fast and you have to give your ‘all’ and that’s what I did both times. The track was terrible in the second moto: so tough! I got another good start and passed [Thomas Covington] through the quad. I rode good lines and smooth to take a good win.”

Jonass: “It is always nice to win but sometimes you can have bad luck. In coming back from last to fifth I don’t feel too bad about today. They say you win a championship on your bad days and I think that was one of those for me. I did my best to stay in the lead in the first moto after passing Jorge and then after the crash at the beginning of the second moto I knew I was staring at a long, long race because the track was so rough and the last minutes would be the most important. I did not rush and took my time to move forward. The most important thing is that I didn’t lose points and we have a lead of a GP now, which is pretty good.”

Jonass’ comeback allowed him to add more points to his margin over Jeremy Seewer in the standings. He is exactly 50 ahead of the Swiss with 250 up for grabs. Prado is seventh.

Robert Jonas, Vice President of Off-road Motorsports KTM Group: “For sure we are so proud and this has been an incredible race for us. MX2 was already awesome and Jorge was outstanding and so was Pauls’ riding to reach fifth place. What the guys are doing in the MXGP class is crazy; I think Tony and Jeffrey were pulling out a thirty-forty second gap on the others. It was so nice to watch the racing. To see that 1-2-3 and even Max Anstie taking third place in the second moto meant it was a pretty nice day.”

Dirk Gruebel, MX2 Team Manager: “I’m blown away. It has been hard work the whole year. We struggled a bit with Jeffrey, Tony has been awesome and Glenn was surprised us today. We joked yesterday when they were 1-2-3 in qualification that we’d sign for that today…but it is rarely the reality. Pauls got up from last to come all the way back to fifth and second overall – really, really good racing – and Jorge? What can we say? He is such a little devil; I love him!”

MXGP continues with a quick pace. Grands Prix in Switzerland and Sweden fill the calendar for the next two weekends. The hard-pack of Frauenfeld-Gachnang just outside of Zurich will undoubtedly welcome another big crowd for round fifteen in a few days time.