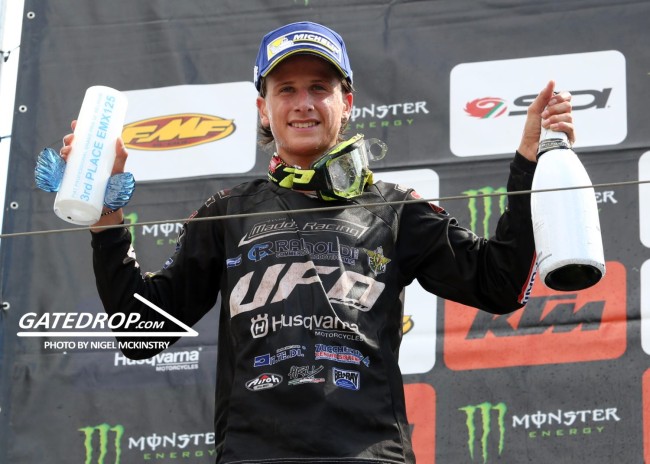 It’s been a great few weeks for the young Italian, Gianluca Facchetti. During the Junior World Championships he was able to win the World title. A week later he also showed very good speed in Lommel in very difficult conditions and got himself on the podium.

After a slow start to the season it’s good to see the young Italian step it up and become a front rider in the class. Facchetti has been through a lot the last few years including a serious car crash which he says has changed his life.

We decided to catch up with the young Italian to discuss a range of topics.

Gatedrop: It was a good weekend for you in terms of speed but you didn’t make it easy for yourself with the crashes. Can you talk me through your weekend?

Gianluca Facchetti: Yeah it wasn’t a bad weekend. Yesterday (Saturday) I made three mistakes on the same lap, I wasn’t so fast yesterday but finished third.

Today (Sunday), I make another holeshot, I pushed a lot in the first three laps and then I had another crash. I passed third, passed second but then had another big crash, this weekend was full of crashes. In the second heat the speed was so fast, I was the fastest. Haarup, at the end of the moto was slower than me. I passed eight or nine riders to finish third. I’m happy because I take good points for the championship. I am looking forward to Switzerland, I hope I can win there in my lovely hard pack. Thanks to my team and see you at the next race.

Gatedrop: Are you happy with your progress in the sand? I don’t think you would have been capable of running that pace a few years ago..

Gianluca Facchetti: Now, we don’t train that much in the sand actually but we have worked a lot to make this progress in the sand. I’m feeling so good in the sand now. Riding like this is good for the future because you can take the technique to the 250cc. It can possibly work better for me because I already know the technique. This year I’m feeling much better, last year was so bad because I was so sick. I never had much power to finish the races good but I’m happy with how it’s going now.

Gatedrop: Last weekend you became Junior World 125cc Championship, how does it feel to be world champ?

Gianluca Facchetti: Yeah, last weekend I became world champion and I am so happy – it’s my dream come true! For other riders now I’m the rider to beat every race. For me, it’s not a problem because I am world champion, now I try to make the European championship. It’s more difficult because I didn’t take many points at the first and second races. Now we keep working for the last two rounds.

Gatedrop: A few years ago you were involved in a serious car accident, how tough was it to come back from that and did it put some things into perspective for you?

Gianluca Facchetti: Yeah, it was a big accident, my life changed because of it. I started from zero and in two years to become World Champion, it was very difficult. I have worked a lot and many people have helped me to make my dream come true. I try every race to stay good with my body and for no crash. Today, I am lucky to be here because I do big crashes and the accident was also bullsh*t. It changed everything. Last year was not a good year for me because of it but this year is different and I try to win every race. Thanks to my team who have helped me a lot, we work together very well.

Gatedrop: You’re good friends with Antonio Cairoli, what’s it like riding with him and I’m sure you’ve learnt a lot from him?

Gianluca Facchetti: Yeah, I have learnt a lot from Tony. He is one of the people to help me a lot, he’s one of my best friends. He helps me every race but now I think he’s little bit angry with me because I do too many crashes (laughs) but sometimes that can happen!

Gatedrop: Having him in your corner must be good because you can see how hard he works which means you are under no illusions to how hard you need to work if you want to make it to the top.

Gianluca Facchetti: Yeah, we need to work hard to make another step for next year. We will try to win the European Championship and in the end we will see how it goes.

Gatedrop: I believe next year you will stay with the same team but in the EMX250 championship?

Gianluca Facchetti: I don’t know yet. We need to see.

Gatedrop: You’re with the Maddii racing team and it’s the first year for the team. How are you happy with how the first year is going with the new team? It should only get better!

Gianluca Facchetti: Yeah, the team is good. I have now won the World Championship on the Husqvarna with Maddii. I’m so proud for him to win the title as a team manager but now we need to work more for next year and the end of this year.