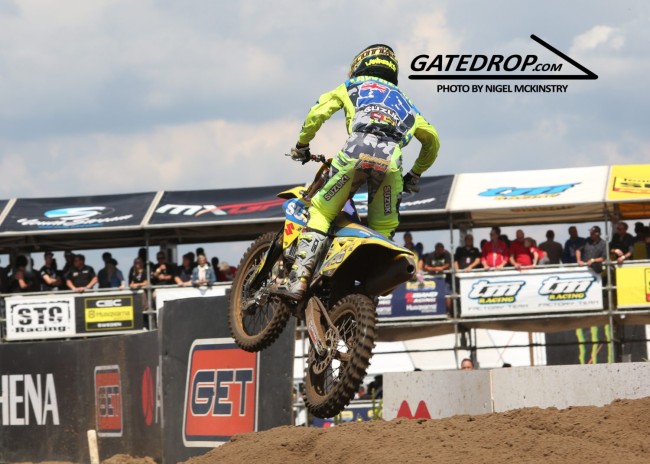 One of the most talented riders in the MX2 World Championship is undoubtedly Hunter Lawrence, the Aussie is competing in his rookie year in the class and has already posted some impressive results.

Unfortunately, Hunter picked up a back injury, which meant he had to miss two rounds, but he still sits an impressive ninth in the championship and third best rookie behind Thomas Olsen and Jorge Prado.

The Aussie experienced a race day in Lommel for the first in his career at the weekend and despite some bad starts put in very respective results to end up eleventh overall.

We decided to catch up with this Aussie to get his thoughts on Lommel and how his rookie year in the class is going so far.

Gatedrop: Hunter, this was your first race at Lommel after missing the EMX250 round last year through injury. Can you talk me through your day?

Hunter Lawrence: Yeah it wasn’t too bad. We didn’t get such a great start in the first moto down in twentieth or something. We went to work and I think I came back to eleventh. There were a lot of positives to take forward from that one.

We made some changes for the second moto with the suspension mainly. I came out with a fresh mind, a good attitude and an Australian heart you know. The start wasn’t too bad as I was in the top fifteen I think, not amazing but better than the first start. At the start of the second lap I was in quite a good position, I think near the top ten maybe. I just jumped off a single too big and ended up on a really big breaking bump. I got off balance and went off the track, it took me a while to get started again after stalling the bike. I was down in last place but just went to work, kept pushing and charged the whole moto, I came back to tenth. It wasn’t bad, there are a lot of positives to take away from today.

It’s one of the toughest tacks of the year I think a lot of people would say. I think my fitness is quite good and mentally I’m quite strong too. We will refresh, get ready for Switzerland and hopefully come out swinging there.

Gatedrop: I’m sure you’ve heard a lot about Lommel and how tough it is. How did you find it and how tough is it for guys that have never rode at it before?

Hunter Lawrence: Yeah sure, it’s tough. But I think the Euro’s really hype it up, you know. They hype a lot of things up and I’m starting to realise a lot of the things are big and great but at the end of the day you are just racing your dirt bike around a track with obstacles. If you really simplify it, that’s all it is.

For sure, it’s a gnarly track, if you’re having a bad day it’s probably one of the worst places to have a bad day. If you’re feeling it, you can go and have quite a good rhythm, it’s not too bad. But for sure I mean it is really gnarly, I mean we don’t have anything like this is Australia. It’s just different sand but I’m happy to get my first GP here under my belt and I look forward to next year, I really do.

Gatedrop: In the Suzuki team you have Jeremy Seewer and Stefan Everts in your corner, just how much have those two been an influence on you and how much have they helped you during your rookie MX2 World Championship season?

Hunter Lawrence: Yeah, lots! They mostly help me with experienced things rather than riding technique, tips and stuff like that. Stefan has done so much racing and Jeremy also, they just have experience in situations that I don’t have yet. That’s awesome, I mean if you could go through your whole life not making any mistakes because you’d have someone telling you don’t do that – you’d have a perfect life almost.

It’s great that they’re there to help me when I make mistakes and that sort of thing. I’ve learnt a lot but some lessons you have to learn the hard way but a lot of little things they can help prevent definitely does go along way.

Gatedrop: Next year you will have your rookie year behind you, what is the goal for next year?

This winter I know what to work on, I know what’s good and what my weaknesses are. I’m excited to learn more and learn what else I can bring to me artillery to have a really strong season next year, that’s my goal.

Gatedrop: Jett turns fourteen tomorrow (Jett’s birthday was on Monday) but he’s going to be racing the EMX250 class next year, what can we expect from him and it must be pretty exciting to have another Lawrence in the team awning at the GP’s?

Hunter Lawrence: For sure, fourteen tomorrow, I forgot it was his birthday tomorrow actually but I’d forget my own birthday so that’s no worries! Honestly, I can’t tell you, I have no idea how he will do. Some people step on the 250cc, look at Jeffrey (Herlings) and Kenny (Roczen), they stepped on it and took off, no worries. Some people get on it and they struggle. We will see how it goes, he is getting the 250 soon I think when he will start riding and learning, engine, breaking.

Obviously going from the 85cc to the 250cc is a big step. The main reasoning for him doing the EMX250 next year is just to get experience with the tracks. They race at all the tracks in the GP’s so by the time he hits MX2 he doesn’t have to come and learn the track like I did. He will basically be coming in and being ready to go at the race track if he’s been there already. That’s the goal and what we’re trying to do. He will get plenty of race experience, that goes along way. The qualifying thing, I struggled a whole lot with going over my head and putting a blistering fast lap time in, that’s something we never did in Australia. In the Juniors, we never had qualifying ever. I’ve had five rounds last year and then this season so far so I’m still learning myself. That’s what we’re aiming with Jett.