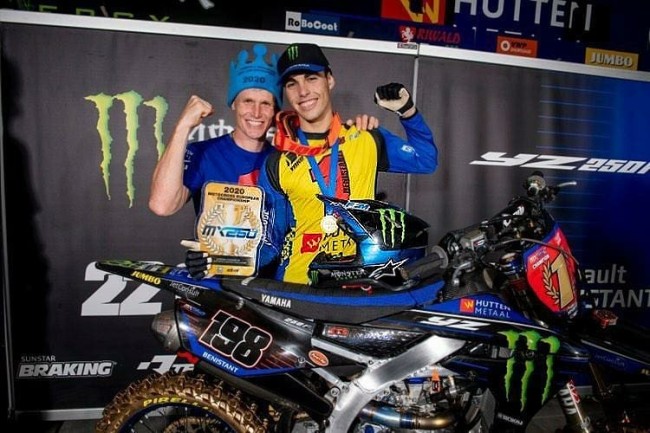 It was a fantastic season for the Hutten Metaal Yamaha team as they received Yamaha backing to become the official EMX250 championship team for the 2020 season.

The team didn’t disappoint as they clinched the title through young French talent, Thibault Benistant who had a very impressive season. After clinching the title it was announced he’d be heading to the Factory Yamaha team for the 2021 season for his rookie MX2 World Championship season.

We caught up with the Hutten Metaal Yamaha team trainer, Herjan Brakke who knows what it takes to become an MXGP rider after having a pretty good career himself.

Gatedrop: Herjan, an amazing season for the team with Benistant clinching the EMX250 championship title. How did it feel to see him win at Lommel?

Brakke: It was an amazing season for our team, clinching the EMX250 title in our first season as official Yamaha EMX250 team is something special and everybody worked really hard for it. The goal for Lommel was to win the races and to focus on his own riding, Thibault did an amazing job and it felt really good to see him win both races!

Gatedrop: It looked like the only mistake he made at Lommel was when he nearly wiped out one of his team members after the race! (laughs).

Brakke: (laughs) Yes, true he was a bit excited and lost some focus, I think. (laughs).

Gatedrop: What’s Benistant been like to work with? He seems very determined and a hard worker from the outside..

Brakke: It was a pleasure to work with Thibault, he is very determined and knows what he is working for. Most important is, he knows that if he wants to achieve something in life that he has to work for it. The commitment he shows was so nice and I think everybody has seen this season that he is very strong at the end of the moto. 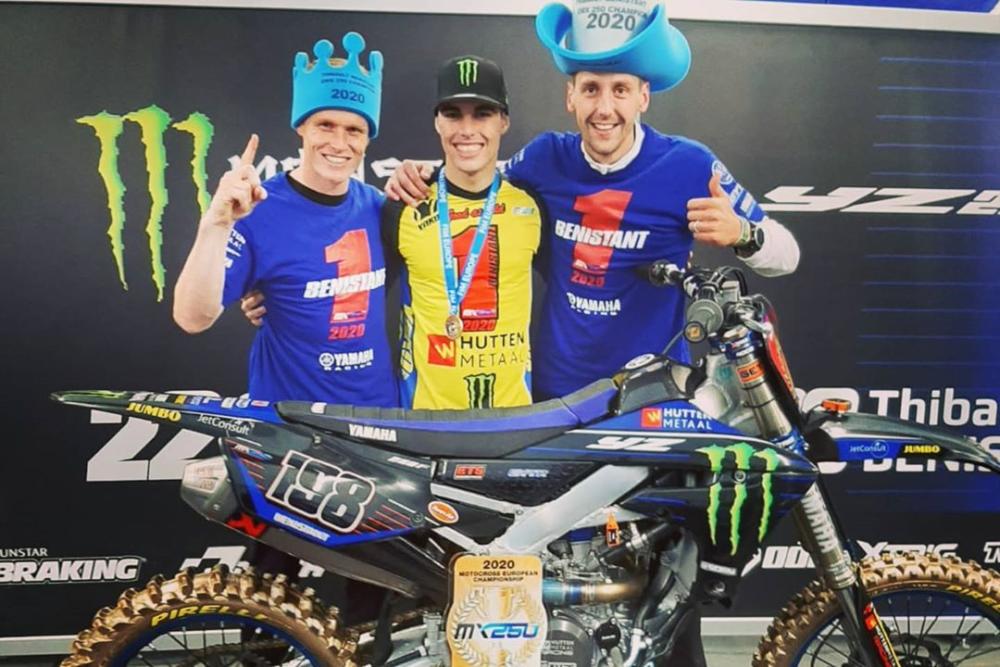 Gatedrop: In the past French riders have struggled riding the sand but the new generation seem to understand they need to be good in sand. What would you put this down too? Perhaps in the past they wanted to race Supercross in America, but they now see the GP’s as the place to be?

Brakke: I think that they more and more understand the importance of being a complete mx rider so a French rider has to take the challenge and make hours in the sand.

Gatedrop: Benistant moved to the Netherlands to live this year, how has he coped with moving there? It couldn’t have been easy…

Brakke: For sure it was not always easy for him, but he has one dream and if he wants his dreams to come true, he had to make this move, no excuses. And that’s exactly what Thibault did this year.

Gatedrop: I have to ask about Guadagnini tactics in slowing the race down, what did you make of that – Benistant dealt with it very maturely!

Brakke: Guadagnini couldn’t control his emotions in that first moto I think and it looked like he wants to go really far for it to still get a change on the title, my opinion is that it’s nicer if you race for it instead of this. Thibault showed that he is a smart rider and controlled the situation very well.

Gatedrop: Benistant now moves to the factory team for the 2021 season, what do you expect from him in the future?

Brakke: Thibault is a great rider with great potential, if he keeps working like he did this season his future will look bright.

Gatedrop: Facchetti ended up tenth this year in the series, he actually showed some good pace so that side you must be happy, but he seemed to fade in races, which is a shame!

Brakke: Gianluca showed some incredible speed and also some good moto’s, this makes me happy. He was a bit unlucky with some DNF’s and also the physical condition of Gianluca isn’t easy to control, which made it difficult in some moto’s.

Gatedrop: Is it true that Facchetti is still struggling from the serious car accident he was involved in quite a few years ago? If he’s doing the same training regime as Benistant it strange he fades…

Brakke: This accident still has an impact on his live, like I mention in the last question this makes it difficult for him some days, anyway he is working hard.

Gatedrop: It’s not easy missing an entire winter and the start of the season but at Lommel, Kooiker showed good pace, you must have been pleased with that?

Brakke: Kooiker had a really really tough season, a bad elbow injury in the beginning of January ruined his season, in Lommel we saw that first moto that he can make good speed. Now it’s time for him to make a good winter season with a good physical program and he is ready for 2021.

Gatedrop: With a full winter behind him, what’s your expectations for Kooiker in 2021?

Brakke: He is still 14 years old so plenty of things to learn, in 2021 he have to take the experience from the EMX250 class and focus on his own development. I’m sure he can do good. I don’t want to speak about positions.

Gatedrop: With Benistant moving to MX2 and also Facchetti rumoured to be moving up too, are you looking forward to working with two new riders in 2021? The more riders you can improve the better!

Brakke: Of course, I’m looking forward to work with new riders! Our team is a development team with Yamaha’s future potential stars. Our goal is to help riders to make their next step, teach them how important training is, how important food is, how important rest is, how to recover etc. etc.
I think in the Hutten Metaal Team young riders have everything to become a professional athlete.