Interview: Graeme Irwin on the MXDN and MXGP expectations! 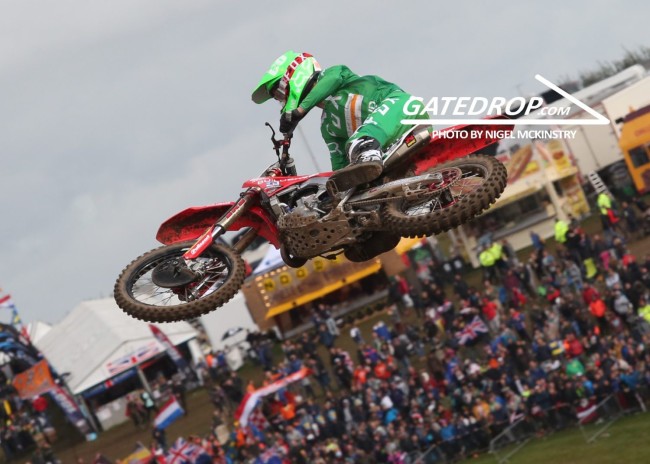 Graeme Irwin showed his GP level speed at the Motocross of Nations in the UK especially on the Saturday when he held off Tanel Leok to finish eighth.

The Sunday races proved more difficult in the mud as Irwin had to battle hard in the middle of the pack, but the British champ rode strong for 21st and 22nd placings to lead Ireland to a very credible 15th place overall.

We caught up with Graeme after the event to get his thoughts.

Gatedrop: Graeme, it was a good day for Team Ireland and yourself. Can you talk me through your motos?

Graeme Irwin: From yesterday it was good. We had really good speed in the track conditions we’ll put it as. In the qualifying race we finished in eighth which was good. I had a good pace and really had the pace to maybe even be fourth or fifth. I was excited about today, we got in straight into the A final which was the goal. The plan was to have two solid moto’s today, preferably somewhere around tenth I’d have been happy with. In the first race I got a dreadful start, I struggled the first few laps. I finally got going and started to make passes but I ended up twenty-first which was quite disappointing. But I crashed on the first lap too, Covington was behind me and he didn’t catch me, I held my own but the damage was done from the start of the race.

In the second race I knew that if I rode like I did at the end of the first race then we could possibly be up there again. I knew the pace was good in the end. I had a really good start but then in the first corner, someone’s front wheel hit my foot and ripped the buckles off. My boot was literally falling off and it was just distracting me. I couldn’t get a rhythm, I don’t think it was all because of my boot but I just couldn’t get into it. I think my setup is also more suited to tighter, twistier tracks so I am looking forward to next year racing the GP’s, getting the head down and racing tracks like this every weekend.

Gatedrop:  You were battling with lots of Grand Prix riders over the course of the weekend. Just how hard is it to battle with those boys not having any GP’s under your belt this year?

Graeme Irwin:  I think that the toughest thing this year is that we haven’t done much hard pack. I mean if a race was as wet as this is then our guys would just cancel it. It’s really good, the event was ran amazing and I’m just looking forward to my future plans.

Gatedrop: Off the track you’re a father now. How is all that going for you and do you think it’s making you better on the track?

Graeme Irwin: Definitely, 100%. I think you know, I can’t put my figure on it exactly but I’ve got more to work for now. During those last couple of laps I’ve more to fight for now, not that I was ever a quitter anyway but it helps. I’ve definitely never been a lazy guy but it does give me a little bit more fight. I love being able to do all this with my family, being able to support them and it’s a great lifestyle.

Gatedrop: Just on the GP’s next year, what’s your expectations going into the season?

Graeme Irwin: Yeah, I want to be inside the top fifteen. It’s not unrealistic at all, I just want to start there and then see where we can go. That’s my plan, there’s a lot of fast guys as we know, the speed is high but I’m looking forward to it. This year I had quite an easy year, I’m not saying it was easy but it was an easier year just concentrating on the British Championship. The next step is to go to the World Championship.

Gatedrop: Will you still be racing the British Championship next year and trying to defend your title?

Graeme Irwin: Yeah, I will definitely be racing the British Championship. I think with doing the GP’s too I think it will bring me along.