Interview: Tim Gajser on his Des Nations, MXGP season and the future! 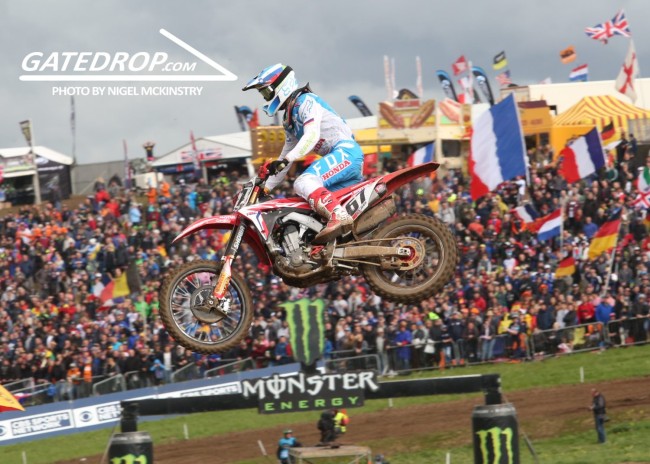 It’s always a pleasure to talk to Tim Gajser as he’s one of the most friendliest guys in the paddock and always have a lot of time for the fans which is great to see.

The Slovenian helped his country finish twelth overall at the Motocross Des Nations. For a country like Slovenia that is an impressive result. Gajser had a good weekend and finished second in the MXGP class behind the very impressive Max Anstie who was racing in front of his home crowd.

The season isn’t quite over for Gajser yet though as he heads to the Monster Energy Cup to get a taster for Supercross in America which is going to be very interesting.

We caught up with Tim to discuss the his season and plans for the future.

Gatedrop: Tim, we’re here at the Motocross Des Nations at Matterley Basin and it was a pretty good day for Slovenia. Can you talk me through your day?

Tim Gajser:  Yeah, actually it was quite good you know for team Slovenia. We set the goals before we came here and it was to finish top fifteen so we were able to do that by finishing twelfth. My riding wasn’t bad, it was quite good but I struggled with the start in both moto’s, I span over the gate so I couldn’t get a good position out of the first corner. I was always like out of the top ten and then climbed back during the race.

In the first race I finished second which was really impressive actually. In the second race I finished fifth as I lost my goggles really early in the race, it was on the second lap or something like that. I got a lot of roost from Seewer, Tonus and Paulin so I have a lot of pain in my eyes right now. I’m actually quite happy overall and especially with the good result for team Slovenia.

Gatedrop: There was obviously a lot of overnight rain, how did the track compare to Saturday? It looked slippery!

Tim Gajser: Yeah, the track was completely different.  I would say that Saturday was really really good and I had a lot of fun on the track with the big jumps at Matterley. There was a big speed as well so I think everybody was out there enjoying it on Saturday. Today was a different story, there was a lot of rain and it was quite muddy and rutty. At the end of the day it was the same for everyone but there was a big difference over the two days.

Gatedrop: In terms of motivation, was it hard to get yourself really motivated for this event? I mean Slovenia aren’t going to win the event! Or do you just treat it like another race that you want to win.

Tim Gajser:  Like you said, for Slovenia it’s tough to get on the podium actually. Motocross is an individual sport but for this race you have to be as a team and work as a team. It’s not just you who makes the point but I am always happy to be picked for team Slovenia and to be able to represent the country at such a big event. It’s one of the biggest of the year and it’s always nice to be here and be part it, it’s always enjoyable.

Gatedrop:  How would you describe your season? It was tough due to injuries but you did have the red plate before the injuries halted your progress..

Tim Gajser: Yeah, it was definitely the season that we didn’t want but that’s how it is, it’s life. You have up’s, you have down’s and this season I learnt a lot. Like you mentioned, the first couple of races were great for me, I was holding the red plate and made a little gap, I think it was already twenty points. Then in Latvia when I crashed, I didn’t finish the second race and after that I crashed even harder breaking my scaphoid. From then on I had to miss two GP’s and lose many points, from then on we knew being realistic that it’s tough to win the championship.

I was really focused on coming back, I tried to come back in the same shape that I was before the injury. It still was not easy, when you get injured at the middle of the season, everybody is improving each race, getting better and better. I was going backwards but at the end I tried to pick up myself and we win one GP in Sweden. At the last race in France I finished strong as well so overall during the second half of the season, when I was getting in better and better shape it was still better than not racing (laughs).

Gatedrop: Just on your winter, it’s been announced your racing the Monster Cup but then looking at MXGP next year, Herlings and Cairoli are going to be fast! Have you thought much about your winter preparation yet and will you practice much Supercross?

Tim Gajser:  Yeah, now I still have one race to do and that’s the Monster Cup. We are focusing now on that. I will do some Supercross testing and training during these two weeks. After that I will have a couple of days free. I will take some holidays and then we will start again with preparations, testing.

I will try to train even harder than in the past years because like you mentioned Jeffrey is really fast, Romain is really fast and Tony will be back – there’s also many other guys and some new guys from MX2. It’s going to be really strong competition but I will be ready! I will do my best as well and hopefully we can bring that championship back.

Gatedrop: There’s been some talk you might race Anaheim 1, is that confirmed or will you maybe put that on hold because you’ll need to focus more on Motocross during winter to prepare for MXGP?

Tim Gajser:  Yeah, it depends. We will see after the Monster Cup how everything goes there. I’ve never raced there Supercross in America so I don’t know how it looks like. The Monster Cup is going to be a great experience to see how it all looks and then we will decide after.

Gatedrop: Last question, it’s been no secret in the past that you’ve said you’d like to go to America. Is that still your plan or do you see your future in MXGP now?

Tim Gajser: I want to go to America (laughs).