Interview: Fredrik Noren on his MXDN and the future! 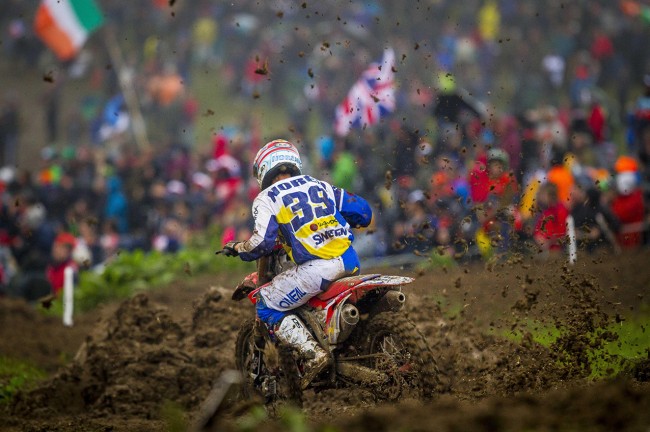 Most of the times Swedish people tend to be calm, polite and easy-going but when it comes to the MX of Nations Team Sweden is as passionate as they come! Each year a loud and loyal army of fans follow Team Sweden to the MX of Nations. This year’s edition in Matterley Basin was no different. Fredrik Noren and his team mates Filip Bengtsson and Alvin Ostlund treated their supporters to a well-earned top 10 overall. We caught up with Freddie in the UK after his biggest race of the season.

If you’re looking for rock solid in outdoor racing you shouldn’t look any further than Fredrik Noren. The Swedish expat made the top 10 three times in a row from 2014 to 2016. In difficult circumstances, AKA the yellow van privateer, he still managed to come home 12th in the Lucas Oil Pro Motocross championship this year. Wrapping up the 2017 outdoor season the 24MX Honda guest rider finished 9th in the Open Class in the MX of Nations.

Good to see you back as a guest rider with the 24MX Honda team!

Noren: “Just like last year in Maggiora we’ve been treated well by the 24MX team. Those guys have been great, and they’re always working hard. Than we have all the people from the Swedish federation. So the support we had was awesome. Overall it’s been a good weekend.”

On Saturday track conditions were really good in spite of the rain in the days before.
Noren: “Yeah, of course the track was a lot different on Sunday compared to qualifying on Saturday. There was no mud, but really good traction and really long ruts. I never rode Matterley Basin before coming here. I actually watched some images from the 2006 MX of Nations to get familiar with it! Earlier in practice on race day it wasn’t muddy but very slick. It was muddy in the motos but you at least you had a bit of traction and you could ride the lines and there were no issues clearing the jumps. The track was getting gnarly, really choppy near the end of the day. I absolutely like the Matterley Basin track and I wished it hadn’t rained but you can’t always have it your way! I’m healthy and safe and I’m grateful for that too.”

How do you look back on the results in Matterley Basin?
Noren: “With the team we reached our goal, because we wanted to make the top 10 overall. That’s the best performance in a long time for Sweden. As far as my own performances went, they were good but I wished I’d done just a little bit better! My aim was to fight for anything between 4 and 7 in the motos so unfortunately that didn’t work out. But in the end it’s a team race. Both Filip (Bengtsson) and Alvin (Ostlund) were really consistent so that’s cool. We kept it together as a team.”

Every single country inside the top-10 is super strong. The US had some bad luck but you finished right behind them…
Noren: “Yes the team dynamics make it a really cool event and the atmosphere at the track is always awesome! No matter how many times you’ve done it before the Motocross of Nations is still a lot of fun to compete in. And it gives me the opportunity to come back to Europe and visit my family and friends in Sweden. So this week I’ll be staying in England, next weekend it’s Sweden and than I’ll be preparing for the Monster Energy Cup.”

Tell us about Monster Cup.
Noren: “MXoN was also the end of the outdoor season for me. Before I came to England I rode a bit of supercross. Actually before the USGP in Florida I rode supercross a couple of times and I will get a bit of prep in California before Monster Cup. Showa is building my suspension. Adrian, my guy over there, builds awesome stuff so that gives me confidence too! Monster Cup has a typical style of track too. Normally it’s a bit faster than the usual SX tracks we get to ride on. The sections and jumps are still in there but to transition from outdoors it’s not so bad. I’m looking forward to racing supercross again.”

It must have been strange not to get the call to fill in at HRC Honda this summer?
Noren: “It actually was because they had told me I was their guy when they needed a replacement. We didn’t talk about it and I still get along really well with all the guys at American Honda. I have to admit it was a bit disappointing. Anyway I had a fun an interesting outdoor season as a privateer. It was pretty hard but I had some good races, we had fun doing it and I learned a lot.”

What’s your plan for next season?
Noren: “It’s not clear yet. If people are looking for a rider they can still reach out to me! For me it doesn’t matter whether it’s in the US or in Europe. The MXGP series is great so if I can get an opportunity there that would be cool too.”

Noren: “Thanks!”
For more information on Fredrik Noren you can visit his website http://norenmx.com/