Interview: Glenn Coldenhoff on his season and re-signing with Standing Construct KTM 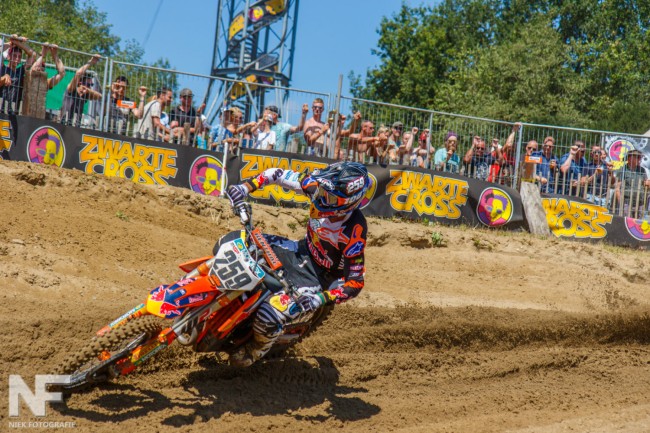 Dutch rider, Glenn Coldenhoff might not have been on the box just yet this season but he’s having one of his best years. Coldenhoff has showed super consistency and currently sits seventh in the championship.

The news dropped a few weeks ago that Coldenhoff won’t be a full factory KTM rider in MXGP next year but he has re-signed with one of his former teams, Standing Construct KTM. The Dutch rider made his breakthrough with that team and will be hoping to improve yet again under the awning.

We caught up with Coldenhoff at the Zwarte Cross to discuss the event, his season and re-signing with Standing Construct KTM.

Gatedrop: Glenn, obviously you’re Dutch so you’re probably used to this crazy event. I’ve never seen anything like this in my life, how would you describe the event?

Glenn Coldenhoff: To be honest it’s also my first time here so I had no idea what went on here. Yesterday I made a lap around the festival and it looks nice but I think to have a Dutch Masters competition at this kind of festival. I think it’s good for the sport to grow, for people who have never been at the races but for example for the people who are always at the races at the Dutch Masters, which is a lot of people because the Dutch Masters is a good competition and always a lot of fans at the track. For those guys it’s a bit hard to come here because they couldn’t buy any more tickets, they were a bit disappointed. On the other hand, to ride in front of such a big crowd is always nice. Overall, it was a good weekend I think.

Gatedrop: What was your thoughts on the track? It seemed very narrow and the fences were close to the track. Also, Romain Febvre went home because he thought it was dangerous, do you agree?

Glenn Coldenhoff: Yeah, definitely. Yesterday I was in the same position like to go home or stay. Like you said, the fences, they were the end of the track. If you made a very small little mistake, it could end up very bad so it was definitely dangerous. Out the back they put enough water today which was good, yesterday was terrible. In the end they tried their best but I think we should also think about our safety and I agree with Romain. But you know, I was still fourth in the championship and I didn’t make any podiums this year in the Dutch races so for that reason I wanted to stay because otherwise I’d have probably went home as well.

Gatedrop: Just on the GP’s this year, sure you haven’t had a podium yet but I personally feel this is the best season you’re having in the GP’s. In the past you’d maybe get a podium but then be 15th or something the weekend after. This year you’re very consistent, would you agree? Are you happy with how your season is going or do you want more?

Glenn Coldenhoff:  I always want more! If you look at all my results during this year I think I can say I am really consistent, I’m always there. I had a little bit of bad luck because the FIM put me back ten places last weekend. Anyway, it wasn’t such a great weekend but when you go back 10 places, from 8th to 18th it’s hard. On the other side, I’m doing a good season now and I’m looking forward to stepping it up a bit you know. I’m training hard and doing everything that I can – we look at every single detail and we try to get better. I feel that the last step is maybe difficult but I feel like I’m still improving so I’m looking forward to making the step. I will do anything it takes. There’s still 7 races to go so hopefully I can finish on the box, that’s our goal. To be consistent again but be consistent a little bit more out front, I’m all the time around 5-6-7 but it’d be good if I could do 3-4. Obviously, Tony and Jeffrey are a step above anyone else. I try to catch up on guys like Desalle, Paulin and Febvre, those guys. Like I said, I will do everything it takes to get there.

Gatedrop: Like I said, you haven’t got a podium yet but Lommel and Assen are coming up, you’ve got on the box at those GP’s before. You must be excited for those GP’s?

Glenn Coldenhoff:  Sure, you know but Assen last year went wrong as well. I think the podium will come when the day will be there. Obviously, I feel good in Lommel, it’s a good track for me and I like the sand. You know, these days the start is very important and mostly I’m at the front but also sometimes if you have a bad day, it’s difficult. Even though in the sand you can make up a little time easier than on the hard pack. There are tracks coming that I really like but maybe it will happen at a track that I don’t like, you never know.

Gatedrop: The news dropped a few weeks ago that you’ve signed for Standing Construct KTM team. On one side are you a little disappointed not to be a full factory KTM rider again or do you completely understand that they have a contract with Pauls Jonass and that’s just the way it has to be?

Glenn Coldenhoff: Of course, I understand. I’m happy that I’m still staying with KTM. They’ve treated me very well the past three years I was with them. They will still treat me well the next two years, they pushed also a little bit that I stay on the KTM and I’m very happy. Signing a two-year deal at this time of the year, there are not so many good teams and a lot of good riders so it’s very difficult to get a good ride. I trust the people at the Standing Construct KTM, I was with them before and that was the year that I broke through. I’m looking forward also for next year, I want to make that last step also already this year but we are getting there. We are getting closer and I think with such great people behind me I can definitely do some good things.

Gatedrop:  The team isn’t official yet but if you stay fit you’ll be heading to America for the Motocross Des Nations. The Dutch will have a strong team with you riding so well, Jeffrey riding so well and probably Vlaanderen in MX2, you must be excited for America at the end of the year?

Glenn Coldenhoff: Sure, the past two years we had a podium so if we can continue to be on the podium again then that’s definitely great. I think USA will be good, Belgium will be good. I think at this time also Germany if they can send Roczen with Nagl and Jacobi is doing well this year. There’s a lot of strong teams and even Great Britain, they also have a lot of good guys so it will be tough I think this year. Our goal is to be on the podium and I think I need to have a good day there. It will be the same for the third rider, just needs to happen in those two moto’s, hopefully we can be back on the box there.