Interview: Hunter Lawrence on winning the MX2 class at the MXDN! 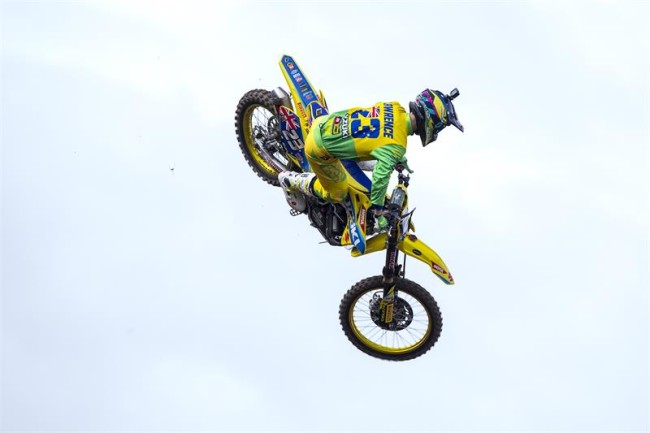 Hunter Lawrence went head-to-head with 250 US National champ Zach Osborne at the MXoN and came out on top with the MX2 overall win!

The young, determined Aussie rode his last race on a factory Suzuki and used his outstanding technique in the mud to get the win despite a crash with two laps to go in his second moto while running third!

We caught up with a smiling Lawrence to talk about his win and his weekend-long battle with Osborne.

A pretty phenomenal performance from you all weekend! What are your thoughts on the MX2 win?

It’s pretty cool, I entered my first Nations and I got a gold plate (winning MX2) so that cool but it is a bit of a bummer we missed out on the podium spot but the boys gave it everything. It’s a good experience and we have learned for next year. Everyone knows what is to come next year now so I am looking forward to it.

And just on your own rides you got great starts, which you have been struggling with in GPs – how did you get those starts?!

I have no idea! It had that BMX-style start thing so I think it really came down to technique and it also wasn’t ripped deep like in the GPs. Those KTMs, they have more over-rev so it doesn’t bog down as much. But yeah, a holeshot in the quali race yesterday and the first moto today was not so bad, the second one was a bit average but I’m stoked, I am coming away with a smile on my face.

Lawrence goes full Aussie as he heads to the start gate! Pic: Suzuki

You weren’t intimidated by the American national champ, Zach Osborne, you went right back at him!

In the quali race I was pissed he got me in the last lap. I was watching it over and it was just fuelling the fire. But everyone around me and myself know that my Saturdays are generally a bit worse than my Sundays. My Sunday’s are always better – I’m a racer not a qualifier.

It was awesome to ride with the guy, I have been watching him all year on tv and he is a super nice guy. It’s cool, I can’t try and race dirty with him or anything because I have so much respect for him. he was here in Europe and had no offers in America, kicked arse in Europe then left for America and now he’s the man there so I have a ton of respect for him.

These performances must give you a big boost for next season..

*It was just confirmed following this interview that Hunter will ride for Honda in MX2 next season then Geico Honda in the US for 2019.

“To join GEICO Honda and their list of riders past and present is an honor,” said Lawrence. “My family gave up a lot to get me to this point so the decision to sign with GEICO was a big one for us. They felt like family from the minute we started talking and are giving me support next year with 114 Motorsports Honda to win a World Title. Then I will make the move to the U.S. full time in 2019.”