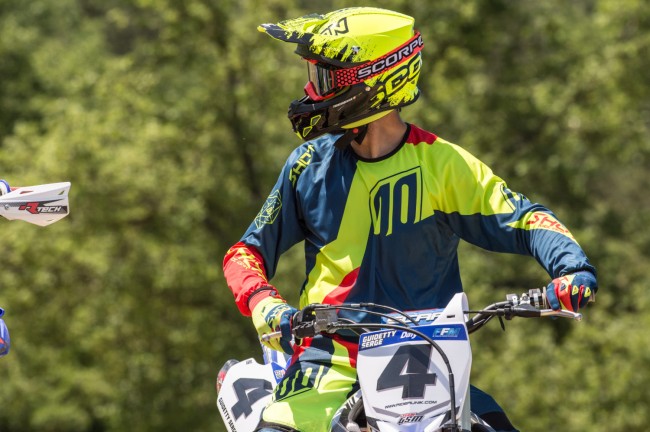 This weekend’s fixture at the famous TT Circuit in Assen will see the veteran riders battle for the FIM Veterans World Cup. Double world Cup winner Mats Nilsson will defend his crown in the Dutch sand but among his challengers are some remarkable names. We sat down with Serge Guidetty, Shot Racegear’s athlete manager, who made his name as an SX specialist and fast privateer in GP’s in the late nineties and noughties.

Why did you decide to race the Veterans World Cup in Assen?
Serge Guidetty: “They made me do it (smiles)! It was a bet with Ghislain Huot, the boss at Shot Racing. He won the bet so I had to race Assen.”

You never thought about competing in the VMX series before?
Guidetty: “No, I was not tempted before although I still ride quite a bit. I have my own motocross school in France where I organize camps or individual coaching sessions. After my professional career I actually never quit riding. And from time to time I’ll do a little local race. But first and foremost my participation in Assen will be about having fun!”

Teaching other riders can be beneficial for the teacher too. It allows you to pick up new things yourself.
Guidetty: “Sure. Just the fact that as a coach you come into contact with coaches from other sports can be very inspiring. There’s always something to be learned from the way they go about physical preparation or general sports principles. For example, things like balance core exercises, being flexible. That’s all great stuff if you can make it relevant for people who are riding dirtbikes! Even after all these years I still learn new things, even when it comes to the mental side of the sport.”

You’ve been in GP’s, you rode at a high level before, do you feel any expectations going into this event?
Guidetty: “No I’ll take it as it comes. I don’t feel the pressure of going for a result. I’m 41 now, my professional career is done. I have competed in so many races at the highest level already that this event is not like the most important race of my life. Don’t get me wrong, it’s awesome to be part of the Veterans World Cup and hey I’ve put in the work to get ready! There’s no sense in just going around, I like to commit to something.”

So you’ve been grinding in the sand in preparation?
Guidetty: “(laughs) Unfortunately yes! I’m absolutely not a sand specialist and things have changed quite a bit at GP level compared to my time. Riding in the sand is so important for every elite rider now. Sand practice is such a crucial aspect for the physical preparation of riders these days. Back when I was doing GP’s sand races were something that riders who didn’t come from Holland or Belgium dreaded!”

It should be fun to race some former GP colleagues.
Guidetty: “Definitely, but to be honest I didn’t look at the entry list of the VMX race yet! Funny enough I ran into Alex Puzar last week in Ottobiano when I was there to practice. So we talked a bit about Assen and obviously it’s cool to race against guys like Alex (Puzar), Mats Nilsson and all the others. Wow, when I come to think of it even my last GP in Montevarchi in 2003 seems like eternity!”

What’s the best memory of your racing career?
Guidetty: “All of my standout performances for starters. My wins in the French National Championship 125cc, the French 250cc Supercross championship, moto wins or event wins in the French Elite. I’m also proud that I was one of the trailblazers for freestyle in France. Back in 1995 I won the Supercross Paris Bercy freestyle contest against Jeremy McGrath and Mike Metzeger! And of course I’m happy with what I’ve been able to accomplish in GP’s too. I got a fourth in Castiglione de Lago in 2002 in the 125cc World Championship, I was sixth in Asti in 1998, in the 250cc GP. I had good days and bad days, maybe I could have achieved more in the World Championshop but overall I’m quite happy with how things went.”

Good luck this weekend!
Guidetty: “Thanks!”