Herlings, Cairoli and Covington on their Saturday at the Assen MXGP 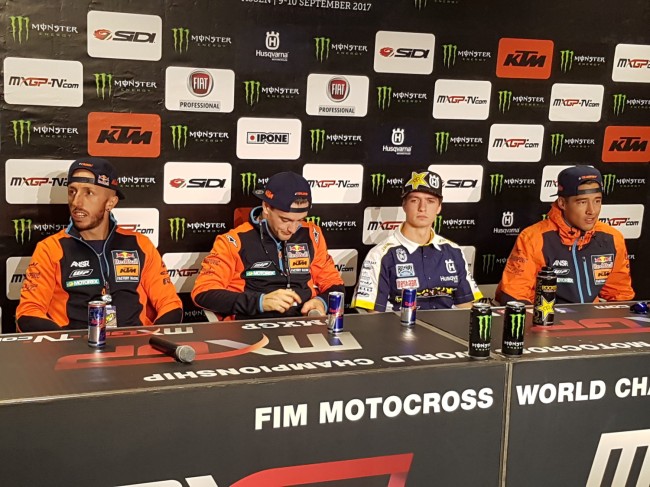 A wet morning gave way to a dry afternoon allowing the riders to show their speed to the fans – even if the soft and deep ruts made for more mistakes than usual with even Herlings and Cairoli hitting the dirt!

The leading contenders spoke with the media and gave their thoughts on the day below:

Herlings: It was pretty good, I almost had a holeshot finally, I was second or third. Then I was behind Tim on the second or third lap and tipped over and Paulin passed me. The track was pretty tough to pass with the rain overnight and yesterday. I managed to pass Gautier then still had around 10 second to catch Tim but we managed to close that gap and got around him and pulled away. it was really good and hopefully tomorrow it will stay dry. They will probably flatten the track tonight but hopefully tomorrow they leave it so it gets rough and we have some options to pass. I think when they flatten it all the time so it makes wide open racing and that makes it tough if you don’t have a good start, maybe just work on the jumps for safety.

It’s pretty awesome to race here it’s a special event. It’s a road race circuit so it’s very interesting and I like it. Hopefully we can have some good racing, there is a big chance two champions can be crowned, one most likely (Cairoli) so that will be good for the fans.

Covington: Today went pretty well. I actually didn’t feel too good in the two practice sessions with the wet sand out there. I got out to a good starts in the race, I followed Lieber for a few laps then ended up making the pass. it was a pretty smooth easy race actually. I just need to do keep getting the good starts like I’m doing and put myself in position to win the heats. I think we are doing all the right things. Last week I got a little bit tired in the second race I wasn’t able to make the pass on Hampshire. But everything is going pretty well for me right now, I think we will be on top soon.

Cairoli: It’s a nice weekend for me for sure. I’m going to race for the win, that’s my goal always. I will try to stay in front and try to be on the podium at least. It’s a difficult race, the track is very difficult and you can top over very easy, if you fall in the wrong place you can be stuck. I was riding carefully from 12th. I was coming back to third but when I was fourth I crashed again. After that I stay in 11th place. But I know tomorrow will be a bit more dry and since I skipped the first practice, I need some time to ride on this kind of track. but tomorrow will be a nice race and I hope for the best. I want to be on the podium. I want to get the title in a good way, not just take the points. We always do out best.

That’s why this sport is very nice, it’s difficult, especially in the conditions of today, it’s tricky. Hopefully we can make a good weekend with the title.

On why he skipped first practice… “There was a lot of water on the track, I knew it would get better during the day. Actually it was not so bad, there was not as much water as I thought there was. We will try to get the championship then try and do a good second moto and finish on the podium, then for sure it will make the party even better!”

On if his performance will change after winning the title…”Yes, maybe a drunk one! For sure we can ride with a more free mind and if you want to do something you can go and if you have a DNF it’s not a big problem anymore. After (winning the title) you can ride a bit more free.”