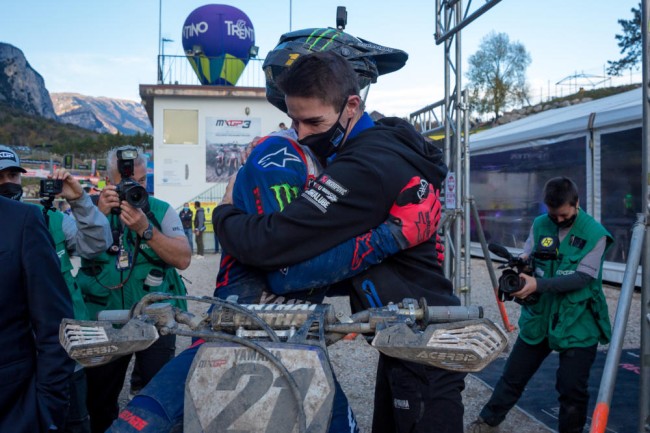 Valentin Touchet has the trust of the MXGP Factory Yamaha team and the team owner, Louis Vosters. Touchet has been part of the team for six years now.

In 2019 and 2020, Touchet worked with Gautier Paulin as his mechanic.  Paulin announced his retirement from the sport but both worked closely together and formed a good partnership.

Paulin finished fifth in the championship and ended his season at Arco di Trento with a podium which was the perfect way to bow out from racing at the highest level.

Touchet certainly played his part, we decided to catch up with the Frenchman to discuss Paulin and his new challenge as he’ll be working with Glenn Coldenhoff in 2021 who’s recently been confirmed as a Factory Yamaha rider.

Gatedrop: Valentin, how long did you work with Gautier Paulin for as his mechanic and how did it happen?

Touchet: I worked alongside Gautier during the 2019 and 2020 season. My boss (Louis Vosters) came to me to tell me that I was going to work for Gautier at the end of the 18’s season. I then met Gautier at Chicago’s airport, after the MXoN at RedBud to talk more or less what he expected from our team and me as his mechanic.

GateDrop: How would you describe Paulin as a person? From the outside he seems very professional and does everything 100%…

Touchet: The answer is already in your question (laughs). But he is humble, you never hear stories from him, he’s is always focused on doing his own things, be on his routine and the same procedure.

GateDrop: As he is so demanding of himself, he probably expects the same from everyone around him. Is that the case and did you find that a challenge?

Touchet: Everyone is demanding and challenging, with him it was maybe more because he came from so many factory teams. He had a lot of experience from the past, so it was really interesting to work with him because you can only learn more from it. 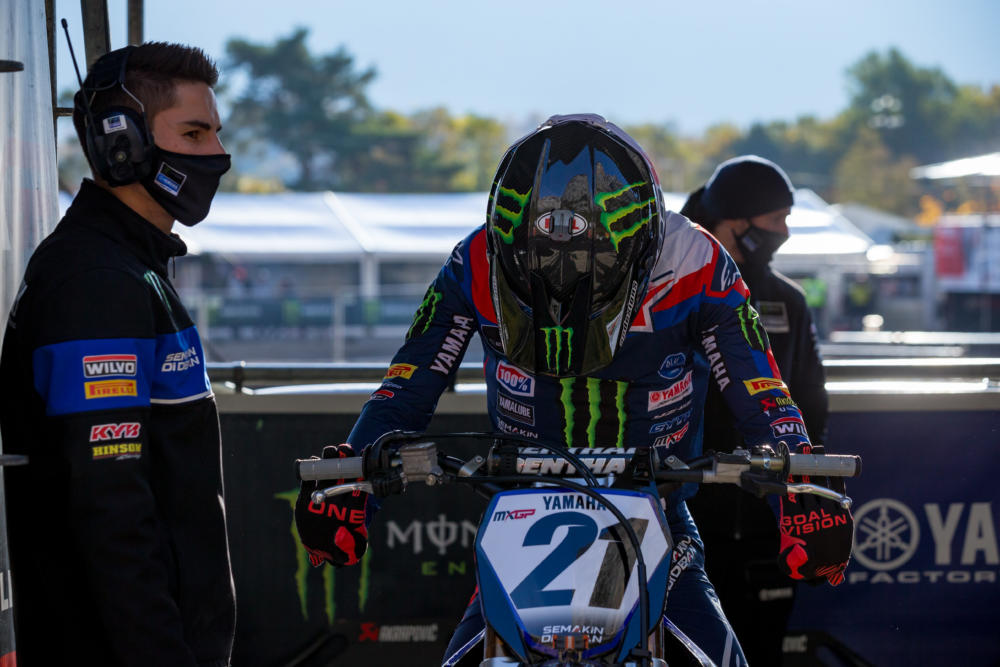 GateDrop: Obviously, Paulin decided to retire at the end of the season. When do you think he made the decision and when did you find out? Was it a shock?

Touchet: We never talked about retirement, so yeah was it was quite a shock, I was on the way to Arco when I learned it. Later I learned that his project was to announce it at the Nations this year, it could be really nice but yeah, the Corona virus changed the game.

GateDrop: How was it during the final GP at Arco di Trento, it must have been quite emotional for yourself and Paulin?

Touchet: Obviously yes, you think about it. Myself I took it like if it was a normal GP race, only when It was only when I wrote the last 4 laps on the pit board, I realized and it gave me goosebumps to be honest.  For himself, to finish on the podium, it could not have ended better. His last speech in the tent was really special too, what a great memory!

GateDrop: It seems like over lockdown he enjoyed spending time with his family and seen there is a life without Motocross. Do you think that played a part in his decision?

Touchet: I read several of his interviews where he was saying that he had stress level at zero, so it could be yes. After to be honest, this is his private life, the most important is that he is in peace and made the best decision for himself and I respect this. 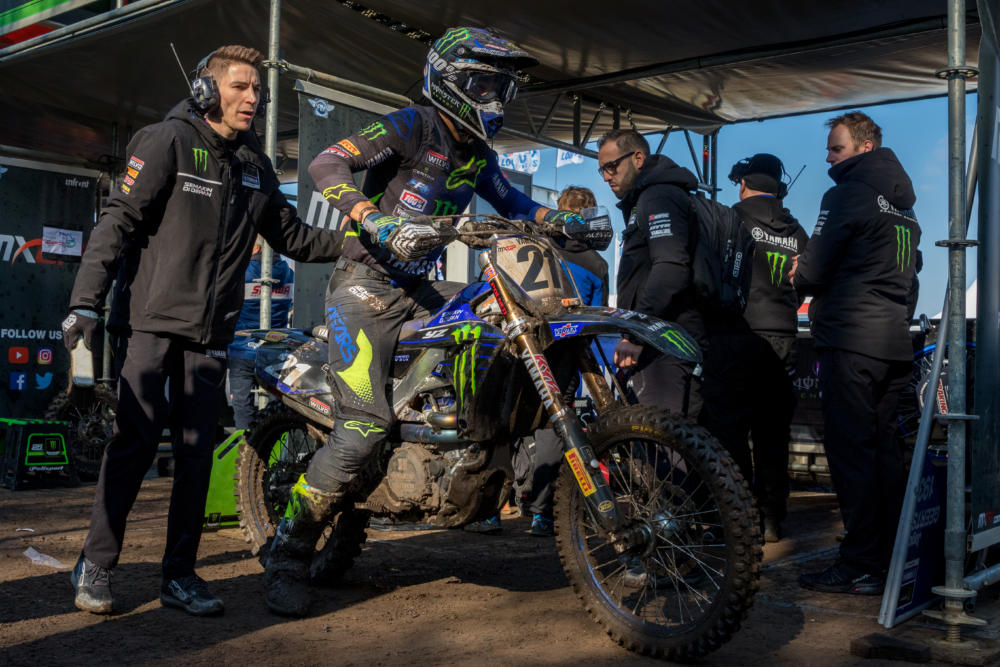 GateDrop: Have you got any stories/funny moments with Paulin either at the track or away from the track you’d like to share?

Touchet: (laughs) Which one to choose? There are so many.  But the first week testing our bike in south of France, at Antoine Meo’s place eating the homemade pizza with “Mitchou” (Antoine’s dad)  was a really funny moment.

Walking on the mountains in Switzerland and enjoying a good restaurant without forgetting the “Coffee Debrief” as we call it was too.

GateDrop: For 2021, I believe you’ll work with Glenn Coldenhoff, a new challenge for you working with a different rider. You must be looking forward to working with the Dutch talent?

GateDrop: How would you compare Coldenhoff’s riding style to Paulin’s? Do you think it’ll be easy for you and the team to adapt to make the perfect bike for him?

Touchet: Both riders are completely different, but both of them are really strong. You know, when you work in a Factory team, it is much easier to adapt the bike around the demands of your rider. Yamaha and our team is really motivated to give him the best.

GateDrop: Coldenhoff is always a 2nd or 3rd gear rider; a lot of riders are 3rd and 4th gear riders. What was Paulin and will that have to be something the team changes to suit him?

Touchet: Every rider is different, but Gautier was also using 2nd and 3rd gear, we changed the gearbox during the season, and it helps him at some point and he was really thankful about it.

GateDrop: Just on being a GP mechanic, how tough and demanding is it? Not everyone sees just how hard you guys work…

Touchet: You need to have passion and not really something to hold you from your private life. This season was really tough, with the virus and all the races in a row going so fast. You just dedicate all your life for your work. Today I’m just happy to be where I am, time wasn’t easy but later I could say that I’m proud of what I achieved. 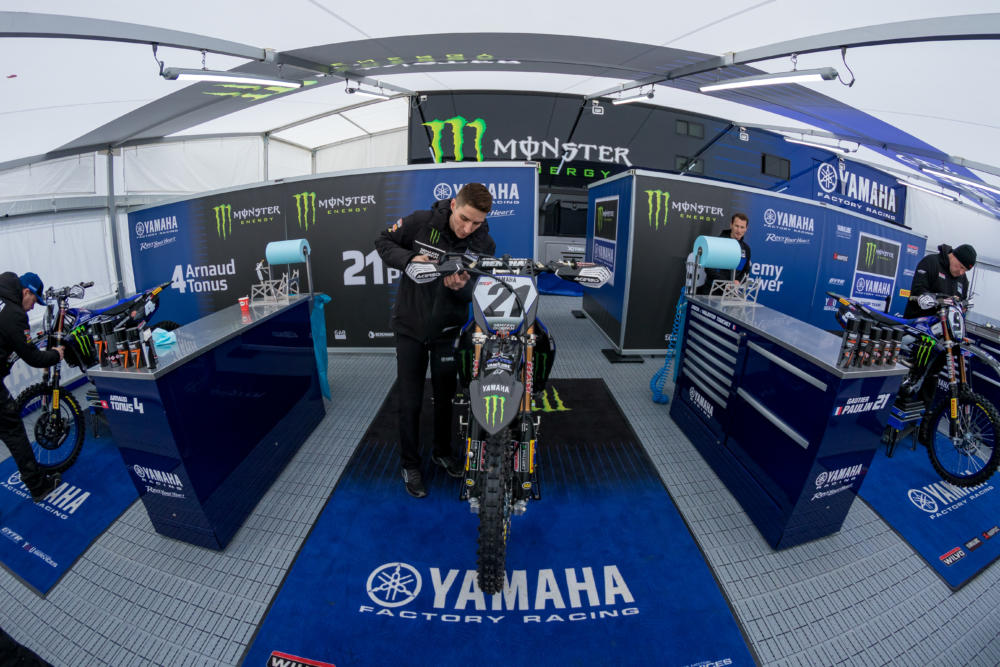 GateDrop: At the same time, when your rider wins and stands on top of the box, that must be a great feeling?

Touchet: That is what we fight for every weekend and it is just a big reward for all the hard work we do.

GateDrop: There’s probably not so much rest for you with testing for the 2021 season just around the corner. What are the team’s plan for that? I believe Watson has already tested the 450cc this week!

Touchet: With the season finishing up later this year, we are still busy. From my side I clean everything from the 2020 season and then start to prepare some bikes for Glenn to be ready when he can start riding again. The others do more or less the same as me, just a few are still testing to prepare for the 2021 season.

Touchet: Thanks to you guys at GateDrop for approaching me for this interview. Also, a big thanks to Louis Vosters for still believing in me, my team that I can call family, my family and friends who are fully behind with my projects.

Images – A special thanks to Eva Szabadfi