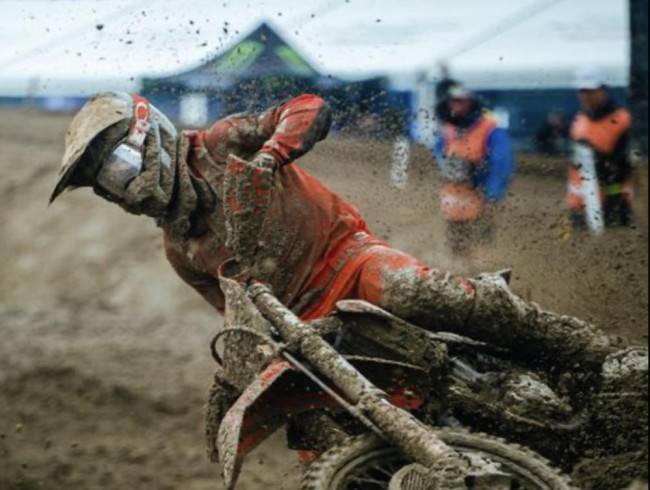 Canadian motocross champ, Dylan Wright, is set to embark on his first MXGP appearances after an impressive display at Mantova with team Canada in the MXoN. Of course, the MXGP series is a different animal with more depth but Wright showed enough speed against good names to impress and he has earned the opportunity to race the last 5 MXGP races of the year – and his speed could surprise some people!

Kevin Frelaud caught up with Dylan to talk about his MXoN performance and the opportunity to race in the motocross world championship, and representing Canada at the highest level in the sport.

On how the deal came about Dylan said: “Yeah as it’s finally been all finalised, I will be racing my race bike from back in Canada that has been kept in Italy since the Des Nations, but I will be pitting and working the crew over at 114 motorsports. The deal basically started when a few teams from over in Europe started talking to me after the good day I had in qualifying on Saturday at the Des Nations. I talked these amazing opportunities over with my team manager for the team I race for in Canada. Unfortunately there were some sponsorship complications with the teams, and we ultimately thought that I would have my best shot of performing the best possible way on my own bike with my own settings I have been racing on all season. The deal then with the 114 team came about when we were talking with Gordon from Honda Europe, and he thought the best fit for what I was looking to do was with the 114 Motorsports team. We then got into contact with Livia (who I already knew and pitted with at Geneva Supercross) to iron out some of the details. I will be staying with the 114 team while I am there, so I am looking forward to the grind with their crew! For the first couple races, it will be just me flying over, I will work with the team and a mechanic from 114. From then my team manager Derek and my fiancé are looking at maybe coming over for the last couple races. But, honestly it’s going to be a solo business trip for me.”

On his Saturday speed at Mantova that no doubt opened a few eyes Wright stated: “In qualifying I was able to have the fastest lap for quite a while during the session, until Cairoli and Coldenhoff jumped ahead of me. I surprised myself a little bit when I came in for a chassis change and saw my name at the top of the board, I will admit that. I honestly didn’t know where my speed would be at, so I was happy I was close to the best in the world. That’s always a good feeling. I honestly wasn’t happy with the 6th in the race, just because I was in such a good position early on in the race trying to pass into a podium position, but I actually went off the track and lost a bunch of time and about 6 positions. Yeah it was for sure a confidence booster for me. I work really hard to try and be the best I can possibly be. So to see that I am close to those guys definitely feels good. It has always been a dream of mine to race the GP circuit.

Regarding expectations of racing in the toughest class in the world Dylan says: “I would like to find myself around the top 10 for the first couple races and then see how well I can do inside the top 10. Once I get comfy with the atmosphere and the racers towards the end of the series, who knows. I am not someone who lines up to lose, I know winning would be extremely tough considering the guys on the gate. I am looking forward to learning what I need to work on or what the guys over in Europe are doing differently that I might be able to bring to my riding.”

Wright also says it’s great for Canadian motocross to have a name in the world championship: “It would be awesome to put an end to this hiatus that’s for sure,” admitted Wright. “JSR is a Canadian icon that I grew up racing. So to be the next guy to do it would be awesome. I hope that this journey leads to something in the future or shows the kids coming up in Canada that there is an option to go over to Europe and race. It has always been a dream for me, so for it to come true will be cool.

“It would definitely be something that I would look into,” continued Wright on the possibility of MXGP full time next year. “I would love to race the GP series. I think that it would continue my progression curve a lot and it’s something that no other Canadian has really done. However, I am still under contract with GDR Honda up here in Canada for the 2022 season, so I would definitely have to talk with my team. They have become like family to me, so any decision for 2022 I would do it very professionally. That being said I would be thrilled to do the whole series, so we will see how much interest I can generate.”

On the nerves as he gets closer to making his MXGP debut, Dylan said: “The reality of me really going to do this has set in for sure. As far as nerves, I am not nervous yet. I do always get nervous, no matter what the race is. However I am going to go out there and race like I would up here in Canada. I am going to try and block out the names on the back of the jerseys and go out there and execute my job the best that I possibly can. I don’t think the fact that there will be some eyes on me will make me too too nervous, but hopefully I can put in some good rides, and some people can see something in my racing that they may be able to work with in the future.

For the Kevin full interview with Dylan go here and you can learn more about the deal from his Canadian team manager’s perspective here.