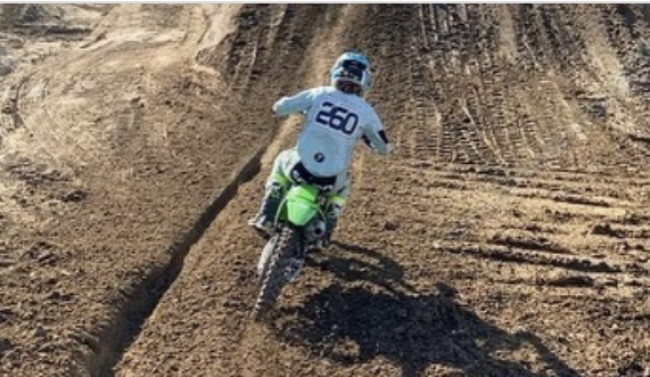 British supercross specialist, Dylan Woodcock, is back out in the States to race the opening rounds of the 250 East coast series!

Woodcock of course has previous experience of racing in the States so knows what to expect, but now no longer a full-time rider, the young Brit is a full-blown privateer paying his own way to Houston in a bid to fulfill his ambition of making the main event at an American sueprcross race.

Dylan was kind enough to give us a few minutes of his time as he went about getting everything together before setting off for Houston this weekend.

Getting to the States

I came to America on the 18th of December, so I have been here about a month. I was waiting to see if I could fly here and all that type of stuff and went to the airport the first time and they didn’t let me in! Then I managed to speak to the AMA and the AMA figured it out so I could get a number on my passport to come out here, so I got that sorted.

I went and bought a bike. I had some money left over from the bikes I had before so I went and bought a Kawasaki from Pro Circuit so they helped me out. My friend there, Olly Stone, (PC mechanic) he got me a good price and stuff on the bike. I hadn’t really ridden at all, I had just been working. I rode in Germany for Dirt Hub for a test just doing some stuff for them and then I rode once on the new Kawasaki and raced straight rhythm on the 450 Kawasaki and that’s been about it in six months!

The bike is mint, I really like the bike, when i ought the bike from Pro Circuit, they mapped the ignition, put a pipe and piston on and that’s it so it’s pretty much stick. I’ve just been to Pro Circuit there now and they traded my steal pipe for a carbon one so they helped me out a little bit.

I think I have ridden maybe ten times at the track since I have been here. one of them was a race. Normally I don’t ever ride before a race ever like when i am racing in Germany and stuff like that, I just have to turn up and wing it because the weather is so bad at home there is nowhere to practice. I don’t race motocross so I don’t need to be boshing around FatCat when it’s two foot under snow!

I am going to do the first six 100%, the plan is just make as many main events as possible, make a main event and just keep building on it. Because I haven’t ridden I am just hungry to ride so its going to be exciting. I feel good on the bike, I did a little race and got third overall which wasn’t bad, there was some good riders there, I enjoyed it. So hopefully I can get some good starts and get into the main event from the heat race

I came when I was young, I think I was 18 so I was still young and I didn’t have any intensity, it was nerve-wrecking. I came back and done Anaheim 1 and I was near the transfer position and then I crashed with Oldenburg but I think this year should be good. After riding in Germany and getting on the podium it just gave me a bit of confidence with whoops and all that type of stuff.

The American supercross is all spaced out so you can pretty much jump all the jumps on the first lap they are all measured up, they are all made the same size so that is why everyone kind of jumps them straight away, it’s marked, it’s measured. I feel pretty good on the tracks, my times are pretty good compared to the people I have been riding with but like I said, I’ve only ridden a few times.

I have a few sponsors but I am mostly paying for it myself. Mickey Carter is coming with me to the races, he always tries to help me, he is a good friend of mine so he is going to the races and help out. We are not going to drive, so a buddy of mine Nick Schmidt, I will drive with him in the morning, so I am just running around getting the bike sorted. I am kind of winging it to be fair, jumping in people’s cars and winging it! I am paying for everything myself pretty much, my dad is helping me out a bit but I’ve been working so kind of had to pay for it all myself – so hopefully I can make some money back!