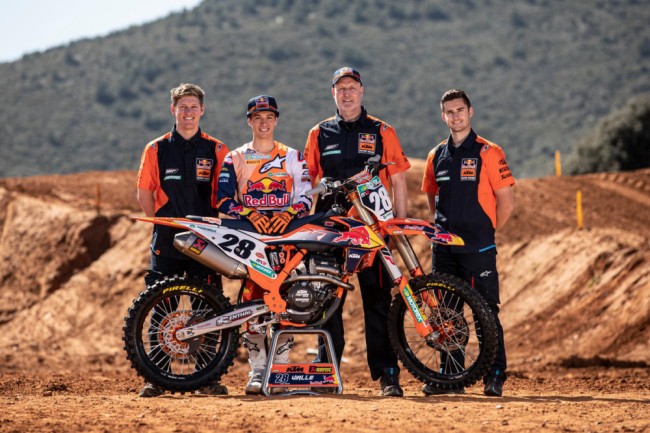 Despite being busy helping to take down the vast Red Bull KTM awning at the end of a roller-coaster British GP, Red Bull KTM team manager, Dirk Gruebel, spared us a couple of minutes to give us the latest on Tom Vialle having to pull out of the event after practice due to a hand injury, Herling’s podium, a great ride by Hofer and Guadagnini’s race two win.

What is the latest with Tom Vialle?

Yeah, he had a crash this week and hurt his hand, obviously it was just too sketchy. He couldn’t hold on and was in too much pain so we had to call it off. He will see the doctors again this week and see how it progresses and see if he can come back next weekend.

So Italy is still a possibility?

And the crash itself, was it a collision!?

So it was really unlucky?

Yeah, but he was lucky not to have more (injuries). He was doing his motos and Moosdijk did starts and he entered the track in the wrong way let’s say and Tom was in his rut. He said it was third gear wide open.

And the hand isn’t broken?

No it’s not broken.

Moving on to Jeffrey, he has been consistent this year, he hasn’t quite the pace to win but he hasn’t made any mistakes this year and seems relatively content.

He is riding well, he’s missing a bit of intensity when it comes to the fight and what was happening up front. But it’s coming along, he’s come a long way from what happened last year. I think we are in a good way, a podium again and we can’t complain about that.

Guadagnini had a brilliant ride to win the second moto and Hofer was impressive as well – those two guys stepped up for you!

Impressive, he (Guadagnini) did really well today. I was surprised. I didn’t expect it, in the first moto he looked good but not like leading a race and bringing it home (as he did in race two). René, he was unfortunate with the crash and something hit the bike and the start button wouldn’t work any more because it cut the cable and he was dead last when he got started. The second one a better start but also he showed he has the speed and he had a nice fight with Maxime Renaux and he showed some spirit, it was good.

After a bad day with Vialle you must be pleased especially with Guadagnini to see the recruitment side of KTM paying off?

For sure, that’s why we have a couple of riders, we have our main guy let’s say, like with Tom reigning world champion, but also the second guy. When the limelight is gone (for the main rider) they step into and they show their potential and it’s nice to see.