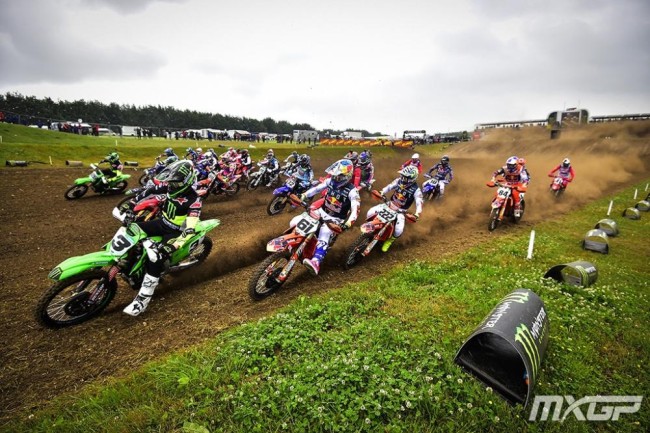 What a weekend of racing at Matterley Basin for the British GP.

The EMX on Saturday was already a great watch on a picture-perfect track with Bobby Bruce starring in EMX125 and the British fans urging him on along the fences – it was fantastic to have some normality back in racing with partisan fans cheering on their local men.

EMX2 was as intense as ever right through the incredibly deep field but Lapucci was sensational up front even if Kevin Horgmo showed he can be the man to push the Italian.

By the end of EMX the track was looking ideal for Sunday and the best riders in the world. Choppy with ruts developing, but also a healthy dose of throttle control needed in certain sections and it would have got even more technical on Sunday. But then, amazingly, they levelled the track overnight for no reason and Sunday morning was a freeway! A very disappointing decision that goes against the very ethos of what has made MXGP great over the last decade -rough, gnarly tracks that are largely left alone over the weekend.

But the races on Sunday were still entertaining. Vialle not racing opened the door in MX2 and Maxime Renaux stepped through it! A win and a second, Renaux showed great composure in both motos – he is a big threat for the world title now. But so is Ruben Fernandez who now has the red plate, the guy is aggressive but he is making it work and Honda have to be over the moon with his performance.

Mattia Guadagnini stepped up big time for KTM to win race two in style in only his second GP as a full time rider underlining just how good EMX2 is.

The MXGP class was simply sensational. The intensity is next level and Tony Cairoli’s performance is almost beyond words. He was aggressive on both first laps to take the lead and controlled race one in an imperious display of elite level riding.

This is a golden age of MXGP and Cairoli is one of the best ever and somehow still winning in his mid-30s. Enjoy what this guy is doing right now because it is simply stunning. He has every right to be in any conversation about the greatest rider of all time.

Tim Gajser won a scintillating second moto on the last lap against a flying Febvre in a race that had five different leaders and a myriad of battles with all the big players in the championship up front.

This was world championship motocross at it’s best with the top riders on the planet fighting tooth and nail all moto to fittingly end a great weekend in the most prestigious motocross championship on earth.