Cairoli on his British MXGP victory 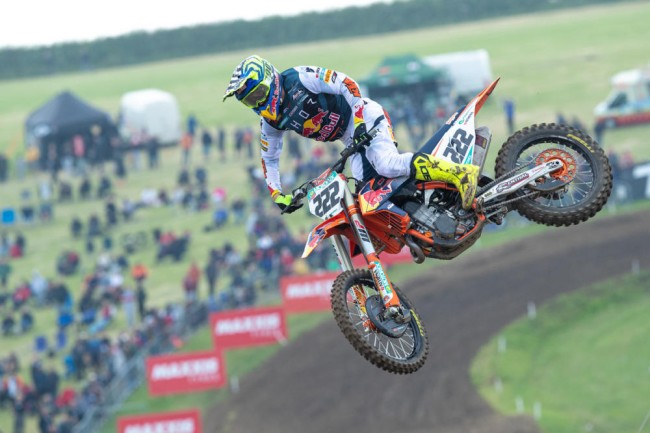 This legend just keeps on growing as Tony Cairoli adds another GP victory to his impressive tally! The nine- world champ won his 93rd Grand Prix at Matterley Basin, despite being in his mid-30s and taking on extremely stiff competition ten years or more younger than himself!

Cairoli is simply remarkable, in race one he cleared off and in race two he went with a rapid Gajser and Febvre after an intense first few minutes that saw the Italian go from third to first back to fifth and then back to third and the only man running the pace of Gajser and Febvre! This is what one of the greatest riders of all time had to say about his latest win…

On the race…I enjoyed race two, the passing was nice! In race one I had a good start I was third, then after a few corners I could make my way to first place. Just push as fast as I can and made a gap between me and Jorge and made it happen. Of course after a disappointing weekend last time in Russia I was really not happy about that mistake, we lost a lot of points but today was a very, very good race, I really enjoyed the track. In the second race the last four laps the guys were pushing very hard, Romain and Tim, and I didn’t want to make a mistake, I was getting tired so I said ok just make this 93rd GP win happen.

Falling back a few spots at the start of race two….It was raining a little, I was struggling with some mistakes, I twisted a little my ankle in the first couple of laps when Tim passed me. I was struggling with the slickness of the track, I was just trying to feel the track, to get a good feeling. Then the rain stopped a little and back a bit to normal where I could regroup and push more and more.

Finally racing healthy again…I’m in a better condition than ‘19 and ‘20. I’m still not 100% with the knee because I feel it a little bit sometimes when I put it down too hard in the corner. It’s just a knee that needs some attention, in some left corners I need to let’s say not give 100% so this makes it a little bit difficult because this means I need to push somewhere else to try and gain back this disadvantage. I really feel ok and hopefully we can improve a little bit more and get better fitness at the end of the race.

On what keeps him motivated…I don’t know, I really enjoy still riding a lot. When you are older and you have a lot of problems also with the health, when you are 20 and you have a broken finger or something you just go, you don’t really care. But when you are 36 and you have some trouble you really struggle more than normal. Finally a feel I little better and also training I enjoy a lot, I started running a little bit again after two and a half years and I really feel better for this and also mentally.