Interview: Dirk Gruebel on 2022 and his change of role 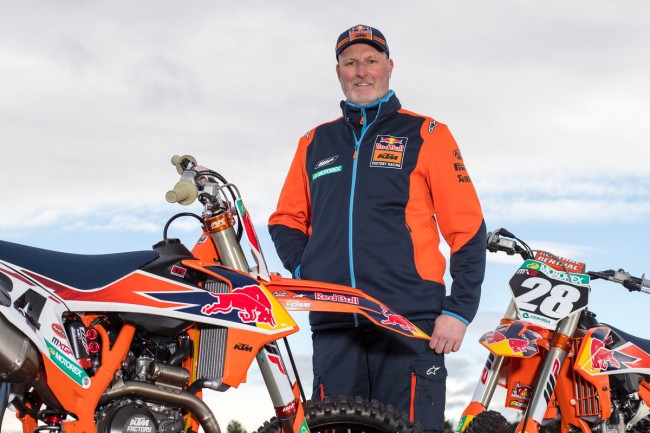 The 2021 and 2020 MXGP and MX2 World Champions face a crucial year of development and transition. Why? Read on…

KTM motorcycles that won three MXGP world titles and five AMA 450SX crowns in seven years and five of the last seven seasons in MX2 has been gently mothballed for the latest generation of the SX-F engineering in 2022. The Red Bull KTM team, who won both MXGP and MX2 together in 2017, 2018 and have had celebrated at least one championship every term since 2016, have slimmed from a six-rider sledgehammer of results and potential to a two-man line-up. The roster is likely to be just one racer, Tom Vialle in MX2, with Jeffrey Herlings’ unfortunate pre-season heel injury.

2022 is thus a year when the orange will twist.

Dirk, how far and how pleased are you with the progress of the new bikes?

We had a small break for winter and then came to Spain for some more tests and I’m positively surprised. We are really on a good way. Both riders have been happy. Of course, there is always something to improve, and we have minor adjustments to make but seeing Tom pushing the 250 and looking for speed I believe we are really in a good direction. It’s a little surprising to be at this stage quite so quickly. With new bikes and development for racing you can sometimes run into issues but – so far – everything has been really solid.

There was a point in late 2021 when you were concerned about supply of parts or the depth of resources for 2022. Is that still an issue?

It’s still a bit slow and we have been battling with the schedule in terms of building-up the race bikes, particularly with the Grand Prix calendar and the third race being overseas. Whether it’s our industry or the car industry, there are certain things that are coming through slowly. Material is not showing up as quickly as before and it mainly affects stock and the numbers of parts. So, it’s a bit of a hassle but I think it is a problem for everybody, not only us.

How would you assess the development cycle of this new SX-F compared to the previous new edition that arrived in 2015? Speaking of the 450 SX-F specifically…

This is a completely new concept and we still need to learn about this motorcycle. It is an ongoing process – also for the riders – but we’re going in a good direction. With the other bikes we had little updates for several years, mainly around the same engineering concept. Now we have a new one. It’s different…but from what I’ve seen is pretty good. We are learning all the time.

How would you define the concept?

R&D took all the information from us and the supercross team and we always had movement with the previous bikes but now we have an ‘anti-squat’ basis, which makes the bikes much calmer. It’s strange to see when you are so familiar with our previous SX-Fs but the feedback from the riders is really good and the lap-times speak their own language. We have opened a new chapter and have a new base from which we can work and improve for the future.

Did you have any doubts when you first heard about the ideas and theories?

No, because you really need to try it. When you have stuck with one type of motorcycle for almost ten years – and it has brought a lot of success – then you naturally have some scepticism but, as I said, the feedback we had from our first roll-out, which was around the Grand Prix triple at Arco di Trento last November, has been very good. That’s very encouraging. If the rider throws a leg over something new and is unsettled then you are in trouble. But everybody was happy. Now the process continues. We need to understand more and take out all the benefits. That’s what we are doing at the moment.

Talk about some of the details of the concept…

The whole layout of the frame has changed from before. The whole rear end geometry with the linkage, swingarm, shock and so on. It’s all different. The ergonomics also. The bike is very symmetric and slim. The movement of the rider and the space on the bike was all taken into consideration.

As an engineer you must be excited to work with a new package but also slightly apprehensive because the last technology was so competitive, so proven…

You always have a bit of doubt when you really have to step-it-up with something new but five months on I’m happy with where we are. There was – and is – very good parts of the old bike and it was developed to the maximum, winning titles left and right. I don’t want to put it in the shadow at all but it reaches a point where it doesn’t make too much sense to race both models and the future is already here. We have already seen what it is capable of and this is our way now.

The new bike is being used in AMA Supercross and the guys have been working on it for four months or so. Is there any data or information that can be swapped or be useful?

The information exchange is there, that’s clear, but we must remember it is a different sport. The bikes look the same…however they have way-different suspension settings and the whole layout of their tracks compared to MXGP circuits, this means the balance of the bike is different. We take the information and look what is useful for us. They are also going through the first phases of development and had pressure because the Supercross season started right at the tip of January. They had to push to get a package ready to go racing and I’m sure that will improve as the season goes on.

Red Bull KTM was formed from six riders last year. Unfortunately, it looks like you will start the season with only Tom Vialle fit and ready in MX2. Is that reduction of track mileage a concern for data and development when you need it most?

The more guys you have out there the more information and data you can collect and gather but we are ‘on this road’ at the moment and the bikes on the other brands are related: it’s not like we don’t have access to information to ‘sister’ teams. The information exchange is there, especially with the engine platform. We can learn from others. There are differences with the chassis and some information you can use, others you can’t. We need to go our own way.

How do you feel about the scaling of the team?

Last year, standing outside the whole two-truck set-up with the two team components and the whole middle linking section…it looked impressive. I knew we would not have it after the end of 2021 but I think our new structure also looks impressive, and people will see it once we start the GPs, but it’s different, with different colours. Our tent is still big and prominent enough. For sure we are used to more Red Bull KTM riders in both classes. It was an army…but the company is growing more and more and we all have to adjust to the changes in the way we go racing.

As well as the team change, your role has also shifted…

It’s the same technical responsibility as I had when I was also team manager but we have made the switch as I’d like to be more involved on the operational side back in the workshop. It’s not a big change.

Jeffrey: it seems we’ve said, or seen, it all before. He is looking so strong in training but then disaster strikes…

It’s a tough situation for all of us. We had a bright sunny day, shooting all morning, #1 on the brand-new bike. It all looked super, and everybody was motivated and in a good mood. Disaster struck. He had done that move several times and then the next one goes wrong. He hit the ground and he’s broken another bone. It’s devastating for him. He’d come from such a high of being world champion again and then injury hits before the season has even started. Difficult to manage…and for us again because the impact of Rene’s death was so hard for all of us in December. One team member gets ripped out of your structure. He was a great kid, and potentially a future world champion because he was developing fast. Jeffrey will recover and is on the mend but we don’t know when he can return to the series. Also, is the calendar solid enough to stay as it is? Or will it be like the last couple of years when we see changes and breaks? If races are postponed or moved then any delay would favour him, so there are many question marks. We need to keep motivated. Tom is a top rider and going for the MX2 title again but it’s a shame we will start 2022 with just one racer! It’s not that you want, of course.

Tom will be aiming for a second MX2 title but will talk of a move to the MXGP class come along quite early this season?

He was looking at it already last year but after the season he had in 2021 – that was very strong but also unlucky – we talked and decided it would be better to have another year in MX2 as a title contender and then moving up hopefully as world champion again in 2023. We all felt he would profit from more physical development for the bigger bike and would gain a confidence boost. For sure everybody is looking to MXGP but we can’t forget that Tom doesn’t have too many GP seasons under his belt yet and moving to MXGP in 2022 might have been a bit too early. I think it was a wise decision. He’s on a good bike, he’s a good guy and a great rider. We’ll see by mid-season where he will go.

The last four months have been dramatic for the team: from the intensity of winning the MXGP title, to Rene’s passing, the new bikes and Jeffrey’s accident. It must have been emotionally challenging…

It’s been a real rollercoaster. But you need to pick yourself up from the bottom sometimes. Life goes on and you need to motivate yourself if you want to stay in this sport and be successful. We cannot live in the past. We need to take the positives from all around us, as well as any kind of positive energy from what we’ve all been through.

What possible expectations can you set on 2022?

We always aim for championships, that’s clear. Riders and people will evolve and we see it constantly. Sometimes it’s not always easy or positive but it’s still nice to be part of that journey as well as to put your mark. Racing is still good fun. We have a solid structure and a good team atmosphere but, of course, the main target is still to win titles.