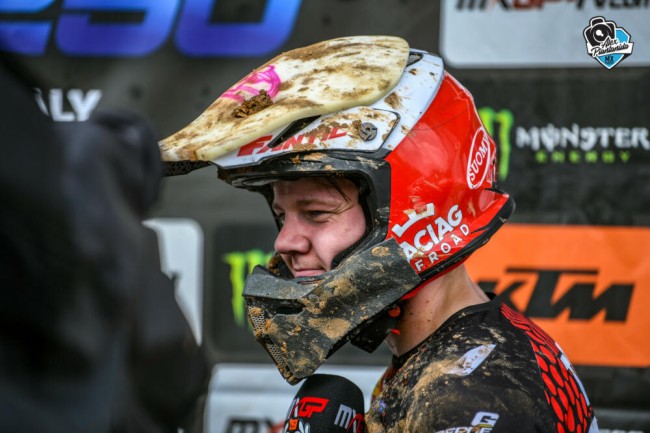 Coming into the 2022 season, Cornelius Tøndel was one of the title contenders for the EMX250 series and after three rounds he has the championship lead and red plate. Together with Rick Elzinga they are stepping a high pace for the others to match and it looks like the championship battle will come down between the pair.

At the moment the momentum is with Tøndel on his Fantic two-stroke and he’ll want to win plenty more rounds as the season progresses.

We caught up with Tøndel to discuss his season so far, his MX2 World Championship aspirations and more.

GateDrop: Cornelius, a fantastic weekend for you here at Maggiora, not only winning but also taking the red plate – you must be delighted with how the weekend went for you!

Tøndel: It went good. I had two good starts and just had solid riding. In the first moto I grabbed the holeshot and just controlled the race from there. In the second moto I went a bit too far to the right on the start straight and Hakon went up the inside. It was almost mission impossible to pass so it was better to settle into a good second place and take the overall. We took good championship points, and it was a great weekend.

GateDrop: I’m sure when you woke up yesterday morning you probably wouldn’t have expected the red plate so that’s a bonus!

Tøndel: Yeah, although I had a good feeling about it. After yesterday when my riding was great – I was first in all the sessions I was on the track. I just had a good feeling, on the hard pack I have been practicing a lot on this and also next weekend in Sardinia, I won the International Italian Championship, I also have good vibes there. I am looking forward to it.

GateDrop: What was your thoughts on the track here both days? Saturday was quite hard pack but still soft on top but then the overnight rain came and it looked very technical today…

Tøndel: Yeah, you know yesterday they expected more rain, but it never came so it was drier. There weren’t so many line choices as they’d have maybe liked. Today was definitely one-lined that was very deep – outside that line was just slush. When I tried to pass my goggles just got destroyed and I knew I had to back off. When I got to second place, I knew it was a very good result.

GateDrop: Did the team inform you on the pit board of Elzinga’s DNF? All the more reason to settle for the second…

Tøndel: Yeah, they told me that on the pit board, “Elzinga out”, so I knew that second place was a very good result and solid championship points.

GateDrop: You want to win every moto I am sure but if you had to pick a rider to win a moto it would probably be your teammate and fellow Norwegian, Hakon Osterhagen?

Tøndel: Sure, it’s great. We work together the whole winter since I have moved down to Italy. We have been working together very good. We lift each other up and always have someone to push with in practice and he has the same in me. It’s a great partnership and we are great team mates so it’s nice to see him win.

GateDrop: How’s everything been going with the Fantic, the two-stroke and the Maddii team? It seems a brilliant and team and the Maddii’s seem to be really good at helping develop the young talents…

Tøndel: We have been doing a lot of good work during the winter, we stay in the same area as the workshop pretty much all winter. We did a lot of hard pack riding and a lot of riding like this in the mud, so we are well used to it. You also saw with my teammate winning the second moto, he rode really good, I think I had a bit more pace, but I couldn’t pass so I just settled for second.

GateDrop: You won a round last year on the Riley Yamaha but how does this win compare? Maybe more special because of the way you did it simply dominating the first moto?

Tøndel: You know, it feels much better to do it with a 1-2 than a 3-3 to really get the win but great results in both moto’s. I feel really comfortable with the team and it’s looking great. I have a seventeen points lead in the championship now so it couldn’t be better looking at the circumstances from the previous rounds. 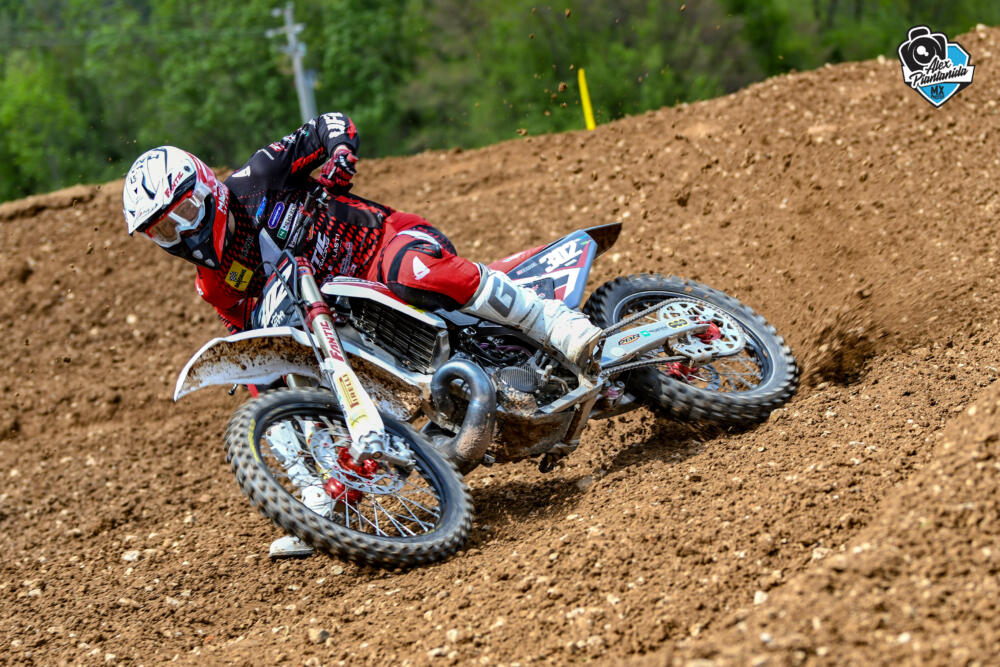 GateDrop: It’s obviously early to talk about it but looking ahead to next year, I assume you will want to be racing the MX2 World Championship?

Tøndel: You know, that is the goal. To keep on top of the EMX250 championship this year, keep the red plate now, keep grinding having good results every weekend. For next year, hopefully MX2 will be the step.

GateDrop: What about all these Norwegians in the paddock?! Horgmo getting podiums in MX2, you and Osterhagen at the top of EMX250 and even Martine Hughes in WMX – what is it you guys are doing at the moment? For such a small country it’s not normal to have all this talent at the same time!

Tøndel: I think we have all been doing the same, we tried to get to Europe to do some European Championship races and just get out of Norway. Norway is not the same with the big races and Motocross is not so big, so we just need to get to Holland or Belgium and do the Dutch Masters. We have more 125cc riders coming up but yeah… I don’t know what it is, we have snow half the year so it is quite impressive. We are doing something right.

GateDrop: When did you actually move away from Norway then and was that difficult to adapt too moving away from your home country?

Tøndel: 2020 was my first season when I lived in Belgium in Lommel with JWR Honda. I didn’t stay there the whole year, but I was living there with my mechanic. It was quite lonely because there’s not so much to do. It was just riding go back watch YouTube or whatever then get ready for the next training. With Riley Yamaha I lived the whole year in Holland but now this year I am living in Italy. Hopefully it can stay this way and we can get something figured out for next year also.