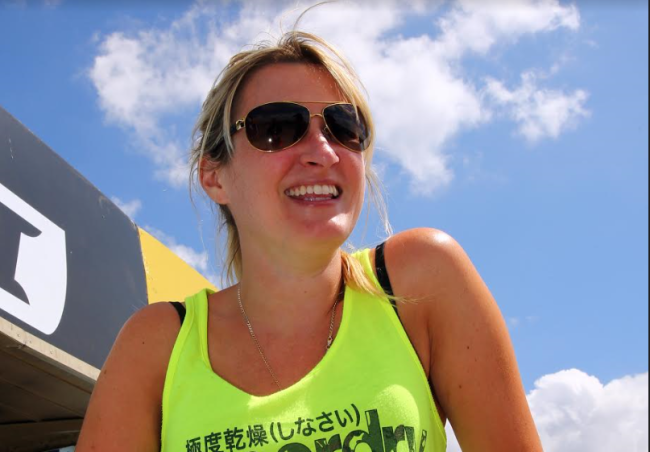 The Motocross season officially gets underway in the UK at Hawkstone next weekend with lots of MXGP riders have entered to contest Hawkstone International on the 9th of February.

Hawkstone International always gets a big crowd and it’s good going to an old school track that gets rough as well. With the likes of Herlings, Coldenhoff, Jasikonis, Jonass, Monticelli in action just to name a few it’s set to be a great event.

We caught up with Carly Rathmell who’s heavily involved in such a successful event.

Gatedrop: Carly, it’s not long until Hawkstone International. You’ve been involved in this event for a number of years, just for people that don’t know, what role do you play in the event?

Rathmell: It’s my responsibility to promote the ASHBROOK – Hazport – Tysers Hawkstone International. I have to liaise with the media to try and ensure we get as much publicity as possible prior to the event. I also have to source and look after the event sponsors and handle the media accreditation for it every year.

Now, one of the biggest markets is social media so in the run up to the event I have to make sure this is updated across each platform every day to the 9th Feb and afterwards, I have to push hard to try and secure a big crowd on the day.

Gatedrop: Let’s start with the weather, how’s it been so far this year in the area and what kind of condition is the track in at the moment?

Rathmell: As always, like every year we are keeping our fingers crossed for the weekend of the 9th. So far January has been pretty mild and kind to us and we just hope it continues. The track was rolled after the final event of 2019 and it will be left until the week before the event.

Gatedrop: The line up this year is amazing, just how much effort goes into getting these riders over and you must be proud of who you’re able to attract!

Rathmell: Gary Ford is the man behind this, he works tirelessly securing some of the best World and British riders to ride at the event at Hawkstone. In recent years every class has been full before Christmas which just shows how popular it has become.

Gatedrop: Obviously not all these riders come for free, it looks like a lot of money has went into this years event and in return you need plenty of fans to turn up..

Rathmell: Obviously…. (laughs).
No seriously, these riders are doing a job as are we but it’s like a chicken and egg situation, you need the riders to secure the crowd. Gary does a fantastic job every year obtaining the best line-up he can.

Gatedrop: There’s usually an International Italian Championship on the same day and it’s the same again this year, do you find it difficult because of that clash? It must be difficult choosing a date!

Rathmell: It’s very difficult to find a pre-season date that doesn’t clash with something and not to run it too close to the start of the GP series. I think with the history of Hawkstone the riders love coming. Even Jeffrey Herlings quoted “I’m super excited to race again in England and will be going all out for the win. It will be great to meet all of the British fans again and thanks to the guys at Hawkstone for inviting me over to take part, it’s a track I really enjoy racing on.”

I think the team have worked really hard in the past to build a really good reputation and it makes it very enjoyable for them to come over and race with us, we are very lucky but it doesn’t come easily, we are also very honoured for all these riders to attend.

Gatedrop: The International race always gets a mega crowd, you must be proud of the fans that turn up every year despite the cold? It certainly gets way more attendance than a British Championship!

Rathmell: I must admit every year I still get nervous about the crowds coming through the gate. It’s a nice relief when you see them coming into the car park, it makes the hard work worthwhile. Like I said before if we didn’t get some of the best riders in the world you wouldn’t get the crowd. The entry is a good price at £30 for a full days racing, I went bowling for just over an hour the other week and it cost me about the same. Some people don’t like the price but it is very good value for money I believe for a full day of entertainment and great racing.

Gatedrop: What are you looking forward to the most at this years event?

Rathmell: It’s always a big weight off my shoulders at the end of the day! I absolutely love the event and the track, it’s such a special place and I used to go there when I was a kid so to be a part of such an amazing event is a real privilege. For me, I always like to see where people are at with it being the start of the season, who is doing what, what surprises come out of it and how seriously fast some of the top guys are!

Gatedrop: The thing that I’ve loved about the past few years is that the track gets rough! I hope that’s the plan for this year as well and there won’t be too much track prep?

Rathmell: It will be very much the same as in previous years but it’s all weather dependant, if they need to do any work because of the weather then they will have too, normally on safety grounds more than anything.

Gatedrop: The 125cc class was new to the event last year, what’s the idea for that new class?

Rathmell: The committee discuss the whole event every year and this year they decided it would be great to have a 125 2 Stroke class, it is our next generation of riders and the class that also filled up the fastest. People also love two strokes!

Gatedrop: Anything to add/anyone to thank?

Rathmell: I would just like to thank all the committee involved in making the Hawkstone International what it is. So much work goes in behind the scenes from year to year to ensure the smooth running of this fantastic event. The Salop Motor Club work endlessly to run this event the way it is run and we are very grateful to all the sponsors, the fans and the riders for making this event so special. Without the people behind the scenes this great event wouldn’t happen and thanks to everyone that supports it and comes along to watch! We hope to see you there on the 9th Feb!!