Interview: Brian Bogers on moving up to MXGP and joining Honda! 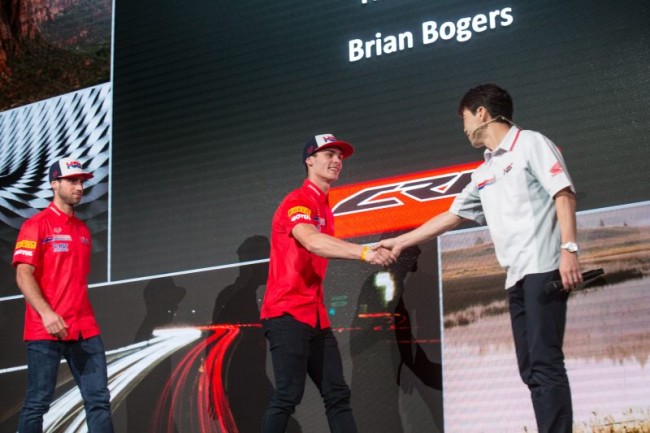 The news broke recently that Dutch talent, Brian Bogers will move up to the MXGP World Championshp under the HRC Honda awning.

Bogers has spent his MX2 World Championship days with the HSF Logistics KTM team and HSF have decided to join forces with HRC Honda which has worked out perfectly for Bogers.

Next year will be Bogers rookie year in the MXGP World Championship and it’s going to be interesting to see where he fits in. Bogers is a big guy so will probably suit the 450cc more than the 250cc but the level in MXGP is at an all time high!

We decided to catch up with Brian to discuss his move to Honda and much more.

Gatedrop: Brian, it’s finally official that you will race the MXGP World Championship with HRC Honda in 2018. How did the deal come about and it must feel good to have your future secured?

Brian Bogers: It feels amazing to be in the HRC Honda team! The future is never secure in this sport but I like the team very much and I hope to be there for many many years.

Brian Bogers: To be honest, it’s because of my weight.  I’m 81/82 kg with a fat percentage of 6/7% which is quite low and I felt sick sometimes when we needed to travel a lot.  At HSF motorsports we had really good bikes and fast bikes but we were still a private team and didn’t have factory stuff.

Gatedrop: You’re a pretty big guy, for that reason do you think you’ll suit the 450cc more?

Brian Bogers: I like the 450 bike really much. Like you said I am a big guy so I need a big bike.

Gatedrop: You’ve already started to test the 450cc Honda, what are your first impressions on the bike and how’s it compare to the 250cc? Will you have to adjust your riding style?

Brian Bogers: The Honda 450 feels so good. You can’t compare it with the 250 and especially not the ktm. There’s so much power and power in a good way.  I don’t feel like I need to change my riding style, it feels more like that I’ve always been a 450 rider but never had the power.

Gatedrop: You’ll spend a lot of time testing with Tim Gajser, you must be looking forward to learning as much as you can with him?

Brian Bogers: Yes, we will test a lot together but there’s nothing to learn from him about the bike if you know what I mean. You need to test the bike for yourself and that you will have a bike that fits your riding style. But what you said, he’s the former world champ and there will be things to learn from him.

Gatedrop: You seem to struggle a bit at the overseas GP’s, you must be happy there’s less of them next year?

Brian Bogers: It’s what I said about my fat percentage, that is one of the main reasons why I struggled with the overseas GP’s! But I do like the races over there.

Gatedrop: What are your goals for your rookie season in MXGP?

Brian Bogers: I have a goal of course but It’s hard to say because next year there will be a lot of tigers in the MXGP field, but we will see which ones will be the most hungry.

Gatedrop: Holland made the podium again at the MXoN and have a lot of top quality riders at the moment with more coming through in the junior classes, what do you think is the reason for so many strong Dutch riders in recent times?

Brian Bogers: Holland has it’s own speciality’s and that’s a big secret (laughs).

Brian Bogers: I would like to thanks HSF for this opportunity and HRC for giving me this chance.