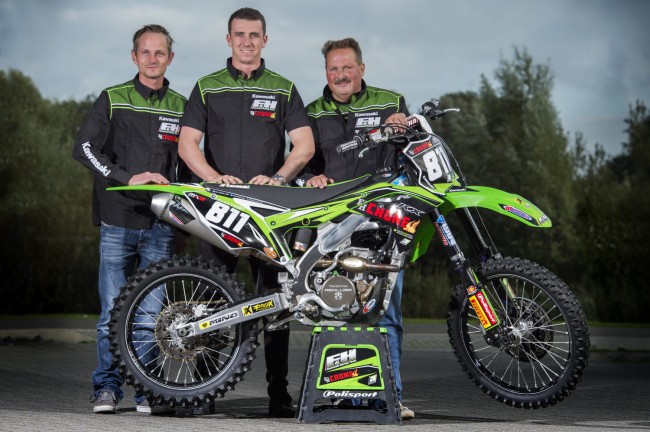 Harrie van Hout is a well respected name in the MXGP paddock as he’s had a role with Kawasaki for many years. With the official MX2 Kawasaki team pulling out for the 2018 season it was an uncertain time for the manufacture.

However, the good news is that Kawasaki will step up to support the F&H Kawasaki team in the 2018 season. The team will step up from the EMX250 series to compete at the MX2 World Championship for the first time, they have signed up Adam Sterry and Jed Beaton to partner with Ruben Fernandez.

We decided to catch up with Harrie van Hout who will be the coordinator for the F&H Kawasaki team in 2018 to discuss a range of topics.

Harrie van Hout: This year I was working part time as the coordinator between the Monster Energy Kawasaki teams, KRT MXGP, KRT MX2, BUD racing, Team 114
and Pfeil Kawasaki. I also walked in by each of the other Kawasaki teams like
Gebben van Venrooij and F&H Kawasaki Racing Team during the race
weekends.

The job I had from Kawasaki was really nice and I liked it a lot. Actually, I
did this year all what you had to do inside a team so was something new
each day and not the same as just being a manager or mechanic.
Before and in the season, I also helped the F&H Kawasaki Racing Team
with sponsorships and with all other help they needed and requested to
help them improve as a team.

For 2018 I’ll be the coordinator for the F&H Kawasaki Racing Team and I’ll
help them as much and as good as I can to improve and to achieve the best
possible results as we can get. I think with Ruben Fernandez, Adam Sterry
and Jed Beaton we have a really strong team and I hope we can do well
next year.

Gatedrop: Earlier in the year, it was revealed that the Factory
Kawasaki MX2 outfit would stop. Just when did you know that and
from your side what were the reasons for it stopping?

Harrie van Hout: I knew already a long time that there were some things going on, but still it was sad to find out that the team would stop at the end of the season as I
worked for them for 6 years and I know how much time and effort went into
the team.

Gatedrop: Obviously Kawasaki will step back up to support the F&H
Kawasaki team in 2018. Was it hard to get Kawasaki back onside for
Factory support?

Harrie van Hout: For me it wasn’t hard as I worked for and with Kawasaki since 2005. The team is pretty new and had some things to prove and I think they were and
are proving it. Also, by being able to sign the riders and staff they will have
for the next season they are making the steps in the right way,
but we do it step by step.

We as the team are not there yet, we still have a lot to learn and to achieve,
but that’s one off the reasons why the team hired me to be the coordinator
for them for the 2018 season.

Gatedrop: We’ve saw Suzuki drop out from MXGP and MX2, it looked
like Kawasaki might, from your point of view why do you think
manufacturers are starting to cut back? It seems strange considering
the manufactures have been investing the most they ever have the
past few years.

Gatedrop: Let’s talk about the F&H Kawasaki team. Obviously, it’s a
great opportunity for the team to receive factory support and it will be
the first time they focus on the MX2 World Championship as oppose
to the EMX series.

Harrie van Hout: It’s a great opportunity from Kawasaki and we are really thankful for the
chance they will give us.

For the team, it will be new to have 3 riders competing in the World
Championship MX2 but I think we will handle it in a good way.

Gatedrop: The team will have two rookies in the form of Jed Beaton
and Ruben Fernandez. What do you expect from them in the MX2
World Championship?

Harrie van Hout: Jed showed us in Villars Sous Ecot what he is capable of doing and I hope he can do the same for us next season. But in MX you never know what’s
going to happen, so for him I would say a solid top 10 rider.
Ruben did some really good and some really bad races in the EMX250. In
the MX2 races he showed us that he has the speed to go top 10 but that he
has some points to work on to be able to finish inside the top 10. I hope he
can be more consistent and he is able to finish all moto’s in the top 15 or
even better.

Gatedrop: Then there’s Adam Sterry, you’ve worked with him before
so that should help. What do you expect from him in 2018?

Harrie van Hout: For Adam it will be a long way before he’s back up to speed as he comes
from a serious injury what left him on the side line for many months. Think
this year in Valkenswaard he was just up to speed and healthy again after
small injuries and was running in P3 and hurt his knee – that ended his
season. I think when he comes back up to the speed he had by then he will
be a top 5 rider and hopefully he will be able to go on the podium.

Gatedrop: Last year the talented David Herbreteau left the team before
the end of the season. What was the reason for that?

Harrie van Hout: There where multiple reasons for the team and David to split their ways, but that’s something we and David agreed on to keep inside the team.

Gatedrop: Youthstream announced the 2018 calendar last week, what’s your initial thoughts on it?

Harrie van Hout: It’s going to be a long season (laughs). I think is nice to start off in Argentina where the organisation is doing a great job and the crowd is amazing. I
hope we will have better weather in Indonesia and it’s a new challenge to go
back to Turkey after 8 years. It’s nice to see as well that there are some more new
venues on the calendar.

Gatedrop: Marc de Reuver has joined the team to work with the riders. Pauls Jonass speaks very highly of him so you must be happy to attract Marc to the team and hopefully he can take Jed and Ruben to a new level?

Harrie van Hout: Marc has a lot of experience as a GP rider and it seems to me he did a
great job together with Pauls to win the championship. I’m looking forward
to see how Jed and Ruben will improve by working closely together with Marc and Nick van Gemert.

Harrie van Hout: I would like to thank Steve Guttridge, our racing manager from Kawasaki Motors Europe and Monster Energy for the opportunity they gave me and
for the experience I gained with my job this year.
Next to that I would like to thank the F&H Kawasaki Racing Team for the
opportunity they are giving me to work for them for next year.
Last but not least, my girlfriend for keeping up with me with the amount off
hours we put into my job and joining me at all the races.