Husband and Meara on FatCat 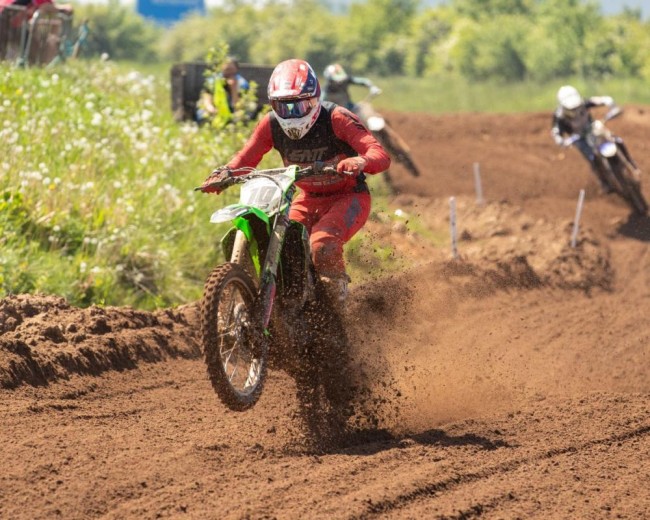 FatCat Moto Parc was the venue for the opening round of the Michelin MX Nationals Powered by Milwaukee on a hot and sunny weekend as the Phoenix Tools Apico Kawasaki team looked to make a strong start to the Championship.

For 2021 the format change saw the Pro riders now competing on both Saturday and Sunday having 4 races across the weekend. On Saturday the Pro riders would race in their machine classes alongside the Experts, before reverting back to the mixed MX1 and MX2 Pro races on Sunday.

The qualifying sessions saw Carlton Husband produce a superb fast lap to secure second fastest in the MX2 class just behind GP rider Conrad Mewse. In the MX1 class, Jason Meara was 15th fastest as he continues to return to fitness from his shoulder injury and in the MXY250 class, Sam Atkinson just missed out on the pole position.

Carlton Husband
After his strong qualifying position, Carlton went into the races feeling confident of some good results. The opening race on Saturday saw him struggle off the start and have to charge hard through the pack to recover to 6th place and showed good pace in traffic. The second race was a similar story with another bad start and a charge though to the pack to claim 8th place.

On Sunday Carlton was looking for some better starts but unfortunately didn’t get out of the gate well in the first Pro race and charged from the back of the pack to head the MX2 field briefly on the opening laps before losing a couple of positions and finishing in a well-deserved 3rd place after a terrible start. The final race of the weekend completed a weekend of bad starts and recovery rides for Carlton who charged hard all race long to finish in 4th place and claim 4th overall.

Speaking after the weekend Carlton said ‘this has been one of my best racing weekends of the season so far. I showed some real speed, in qualifying I was P1 for a bit and then Conrad went faster towards the end but to close on time with Conrad is great. In the races on Saturday, I struggled with start and worked my way through to get 6th and 8th. Sunday was a bit of the same with not the best starts and having to battle through. In the first race on Sunday, I was near last and came through to lead MX2 on the second lap and hit a bit of a wall and dropped to 3rd. In the last race, I worked up to 2nd from and bad start and then dropped to 4th at the finish as I struggled with the heat and rough track at the end of the weekend. I’m happy with 4th overall as I have the speed but just need to find some starts.

Jason Meara
Going into the races this weekend it was always going to be tough for Jason with his shoulder injury and the rough track at FatCat. On Saturday Jason started the weekend well with a 10th place finish and followed it up with a 13th in the second race.

On Sunday Jason rode two solid races in the Pro class to claim another pair of 10th place finishes and secure 10th overall on the day and in the championship.

After a tough weekend, Jason said ‘it has been a real struggle train all weekend again, I’m staying positive though, my starts were decent I showed some signs of decent riding and I’m only going to get stronger the more my shoulder heals. I would just like to say a massive thank you to the Phoenix Tools Apico Kawasaki team for being patient and sticking by me.’

Sam Atkinson
After qualifying well in the morning, Sam was feeling positive going into the opening was a quickly moved into the race lead started to pull a lead at the front when he started to lose power and unfortunately, the bike stopped and caused him to DNF the race.
After the disappointment of the opening race, Sam returned in the second moto on his spare bike and had to get comfortable on the other bike and recovered from a mid-pack start to claim a well-earned 3rd place in the MXY250 class.

On Sunday Sam was determined to put together two strong results and had a good battle with Alfie Jones for the win and finished in 2nd. In the final race, Sam would have another race-long battle for the win with Jones and Jude Morris and came away with 2nd place once again for 5th overall on the weekend after the opening race DNF.

Sam recapped his weekend by saying ‘In qualifying, I got bunched up in a group of riders and couldn’t get a clear lap but still managed to finish 2nd fastest. In the first race, I got a top 5 start and had an amazing opening few laps and got into the lead and started to lose power and had to DNF. In race two I was on my spare bike and came back from a bad start to finish 3rd. On Sunday I got 2nd in race three and another 2nd in the fourth race. The weekend ended well after and bad first race.’

Barry Moore – Team Owner
I was pleased with round 1 of the Michelin MX Nationals at FatCats, the track was brutal and with the heat, made a 4-race weekend really demanding for all the riders. I was pumped for Carlton posting 2nd in qualifying behind Conrad and 4th overall was a good start to the championship, on the flip side I was gutted for Sam after a DNF spoiled a chance of a podium finish but showed great character to come away with 5th overall. Jason unfortunately had a crash and hurt his already tender shoulder in the first race Sunday and struggled to hold on in race 2 but came away with 10th overall.