Jett Lawrence on his win at Pala 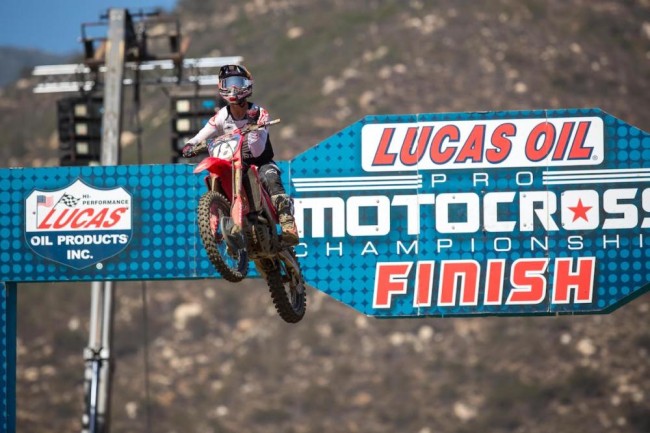 Jett Lawrence showed his class and maturity that belied his age (17) with a brilliant performance in both motos at Pala. The teenage Aussie rode a very smart race in the opening moto coming from way back in the pack to second combining speed with no silly mistakes in a situation that was easy make errors!

And again in moto two Jett used his head, this time a good start he stalked Justin Cooper and Jeremy Martin before passing both title rivals and pulling away for a statement win at the start of the season to show everyone he is in it for the title.

Lawrence said: “My start in the first moto didn’t give me good hopes of a podium, but I ended up carving my way through into third; then [Max] Vohland had some bad luck with a bike malfunction so I ended up going into second. I could see Jeremy [Martin] up there so I kind of put in a little bit of a charge, but I didn’t want to overdo it and make a silly mistake like I used to. In the second moto I think I was eighth or something on the start. I made my way into third, and it took me a while to figure out what the two Star boys were doing out front; they were really on it. J-Mart made a mistake and I was able to get close enough to watch what he was doing and got a pass done a few laps after that. I set my eyes on [Justin] Cooper and caught him fairly quickly; I think he might have made a mistake, but I got the pass done, which was really good.”

Lawrence with experience of riding in Europe and on GP described the track as technical in contrast to some US riders complaining and with the top two in the 450 class having GP experience and Jett coming from Europe, maybe the difficultly of the track rewarded a smoother, technical style associated with GP riders compared to the aggressive pin it to win it American style that usually works well on the loamy, well-maintained US tracks that riders usually face in the US championship. “It was really square-edged and technical today, it kind of helped me a little bit,” admitted Jett. “but I felt really good; I felt like if it was at any other track it would’ve been the same. I felt really strong because I’ve been putting the work in. I’m glad to see that’s paying off, and I can’t wait for next weekend, to maybe do something similar.”