Giacomo Gariboldi on Gajser riding with Carmichael and the US GP! 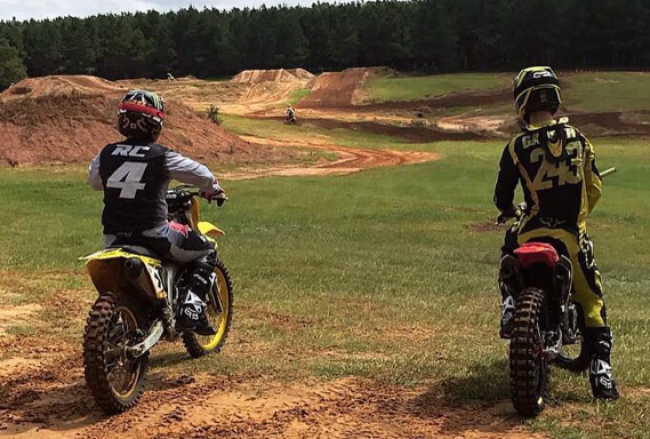 After his GP win in Sweden, Tim Gajser comes into the USGP with a some extra confidence and yesterday the MXGP world champion was spotted riding with America’s greatest motocross rider of all time, Ricky Carmichael.

The experience will no doubt put an extra spring in Tim’s step as he heads to the WW ranch for the US GP this weekend!

We spoke to his team boss Giacomo Garibodli to get the scoop on how Tim ended up at Ricky’s farm, ask if Jeffrey Herlings’ win at the US National gives the MXGP field any more confidence and to find out the sense of achievement after that victory in Sweden, following Tim’s injuries.

We see Tim is riding with Ricky Carmichael, how did that come about and it must be a great learning experience for Tim to ride with such a great champion? Will he go back there during the winter?

Fox organised a photo shooting session with Tim and Ricky so they met at his farm. Honestly I don’t know if now Tim will ask for more riding during the winter time, for sure Ricky could give him some tips if Tim decides to ride some SX at the beginning of 2018!

Did Jeffrey Herlings’ win at the AMA National, help boost Tim’s and the MXGP riders’ confidence coming into this weekend and do you feel a win is possible despite the heat of Florida?

I think none of the top MXGP riders needed a real boost in confidence because they already knew that their ability is at least as good as the top 3 US riders, they have seen it at the last editions of the MXoN where the European riders were faster than their American colleagues! But it’s a confirmation for everybody in the sport that our guys have nothing less than the most celebrated American stars. It sounds strange to hear Baggett saying he wants to come to Europe to ride our tracks to learn, I think this will push more American riders to come and ride over here.

How much satisfaction was the GP win in Sweden for Tim after a tough season?

Tim really deserved this win in Sweden as he has been struggling with injuries this year when he was leading the championship and I still believe that without the injury nobody could have caught him, he was riding so well in Argentina and Mexico and winning almost all the motos, he was the fastest on track and just the injury prevented him to win his third title this year. Tim missed then many training sessions and testing due to the injury and just now he is slowly picking up the form he had at the beginning of the season.