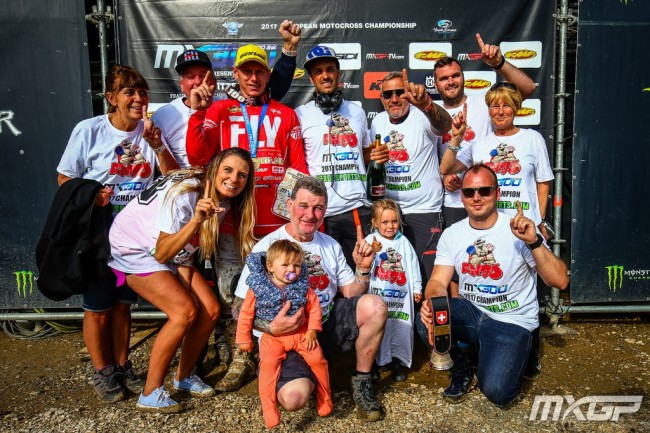 Age is no barrier to speed when you have the motivation and your name is Brad Anderson!

The determined and speedy Brit has had a superb season in 2017, winning the EMX300 championship and finishing third overall in the British MX1 championship.

Anderson split his time between racing a 250KTM and a 450 KTM all year and was unsurprisingly rapid on both machines en-route to having maybe one of the best seasons of his popular career – at 36 years old!

We caught up with Brad to talk about his successful season, the British MXoN team, Jeffrey Herlings winning in America and to find out Brad’s plans for 2018.

Third in the British and European champion, that is a pretty good accomplishment – especially at 36! What are your thoughts on the season as you look back?

If you told me at the start of the season I would be European champion and third in the British I would say it was a good accomplishment, winning the European championship was one of the main goals and we got that done. We podiumed in every round, my worst result was the last round which was a third place in the first race but other than that it’s been consistent and the bike has been excellent.

In the British championship I had my ups and downs to start with and got into it after the second round, we had a bit of bad luck with my back brake at one of the rounds but yeah it’s been a really good year, I just lost out in second down to the last race.

How did you feel Foxhill went for you with a fourth overall?

The first race I took a while to get going. After the third or fourth lap when Graeme passed us I started getting my finger out and putting in fast laps. Me, Graeme and Gert had a good battle for third place until Graeme had a tip-over, but I felt I was going quick enough. In the second race I got a bad start and then slipped off trying to come through. It was so hard to make up time with everyone going the same speed and I could only manage to get back to seventh – although lap and I might have had sixth! I was a bit disappointed with a last race, but fourth overall wasn’t too bad along with third in the championship. I was just glad to come away from Foxhills uninjured to be far because it did look and feel dangerous, the track.

On the European championship, did you enjoy that series, with the different tracks and on the same weekend as the MXGP guys, you have been doing the British for a long time now!

Yeah I enjoyed doing the GPs, I have raced mostly the British championship the same tracks and the GPs are fresh tracks, it’s like winning a GP.  Obviously it’s a bit down from a GP but you get to go ont he podium, it’s a good atmosphere, all the people who go to watch the GP watch you as well, it’s quite a big meeting and it’s nice that people recognise you when you’re winning.

How did it feel when you came over the line to win the title?

Well on the Saturday I felt I had more pressure, I don’t know why. I got a bad start and to fight through and at one point Krass (title rival) got the points back on us, it was equal, but I managed to work my way back from 22nd to third on the last lap and on the Sunday I knew I had to be top ten. But when I saw Krass was out (moto two) I thought I will go for it because I win the championship even if I DNF, so I passed James Dunn on the last lap to finish by winning the last race.

That was an exciting last couple of laps with James Dunn, you weren’t for giving up on that one, you pushed and pushed until you finally got him!

Yeah, James has been going very well, so to pass him on the last lap, he obviously wanted it as much as I did and we were both going for it hard, to pass him with half a lap left, me and the team were over the moon. James still got the overall because of the first race but no, I was happy, the team were happy and to come away with the championship was the main goal and obviously we did it.

See Brad clinch the title below:

Was it nice to be battling another Brit in the European championship? It’s nice to watch and it’s good to see the British guys making an impact at international level.

Yeah it is and it seems the two-stroke thing is coming back, they had a full line-up at Foxhills and I saw Krass (EMX title rival) battling it out with Nev and Dunny at the British championship too.

Just on the British Nations team, there was a lot of furore around the team choice with Tommy Searle getting the MX2 place with a lot of other names bandied about, incuding yours, to be on the team. What were your thoughts?

I would say that Tommy has shown he is capable of getting in the top 3 of MX2 and that he is a good rider. I think to pick what they have picked is good. The picks they have is probably right, we are doing the British championship but I think whoever wins the British championship should get first choice but our team is strong and I will get behind them no matter who is picked and get cheering.

Do you think they have a good chance to win? On paper it looks like they do, but obviously anything can happen!

Yeah, we always look strong on paper! But it’s about a bit of luck and if it goes your way, hopefully we can get on the box this year, we have been close on previous years, it’s about time we did get on the box.

It’s all been about Jeffrey Herlings the last week or so, what did you make of his performance in America?

Yeah we were watching it on Saturday night at the British and I had my bets on Herlings. herlings rode outstanding in the first race and then the second race, I thought I lost my money because he came off at the start. My mechanic said not to rule him out yet, he was catching and I was like ‘ come on, come on,’ When Marvin came off, I couldn’t believe it but it was an outstanding ride, the best I’ve see him go, he deserved it and showed them who was boss really, that was important, going over there and doing what he did. They are going to try and fight back this weekend for sure.

Do you think Tomac will win it this weekend? Or will a GP guy win?

I don’t know, I am always a Cairoli fan, but I think he is thinking about the championship now and if he is top five or top seven he is looking good, I don’t think he needs to push too hard. I think Herlings is looking to prove he can beat Tomac fair and square and Tomac will want to beat Herlings to show last week was just because he was riding for the championship, but I think Herlings will do the job.

Anderson was in great form all year. Pic: Youthstream

Just back to you, do you know you plans for next season, will you defend the EMX300 title?

Will that be on a two-stroke the British championship or will you ride the 450 there?

I would like to see the two-strokes go in with MX2, I can’t see it happening but if they did that I would ride that but I think the ACU want to try and keep the 450 riders so I as things are I think I will be MX1 again (on a 450).

I just want to thank Verde Sport, RJS builders, Putoline Oil and everyone who has got behind us this year because I couldn’t have done it without those people.