Eli Tomac on the intensity of the Sexton duel 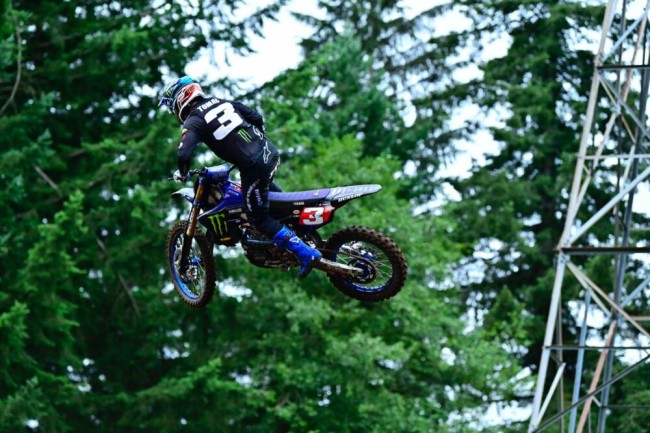 Eli Tomac has spoken honestly about the intensity of his one on one duels with Chase Sexton from the last few motos and says it’s some of the highest level racing he’s experienced im his career.

Speaking in the press conference Tomac, who is five points ahead in the championship with four rounds to go, commented: “Well, here I feel like, if you’ve got more speed than the guy you can set up the passes, [but] we were just dead even. And again, in moto two it was hard for me to really find something else. Once again all of these moto’s kind of feel the same, we are pushing each other to the limit and it’s kind of who’s out front. It was another good day for starts for me but obviously he holeshotted moto two. It was fun. It was fun racing but here you do funnel in a little bit but no excuses. The first one I was able to get to the front so, it was a good day

“I had made so many sprint attempts to get right onto his rear wheel and then I could never make anything happen. Then a couple of moments before that I had a little moment over the roller, kind of drug my foot on the jump and almost went over the bars so I was like “you know what, a wash on the day is going to be okay now.” So yeah, the last two laps I kind of sent it in.

“This one has been the gnarliest week in week out pace, hands down. If you just go back and watch the motos, for week after week after week it’s been a fun time and it’s been a hard push but this one is not even close. Look, we have been riding on each other’s wheel for what has it been? Nine motos now that we have gone 1-2. It’s crazy.

“We are right on each other’s wheel, and that’s what happens, you’ve got to throw down! We are throwing down all the way until the end.”

Will anyone be able to stop Sexton and Tomac wining the motos at Red Bud with this pace and no Herlings and maybe no Gajser at the MXoN, two of the fastest riders in the world championship?