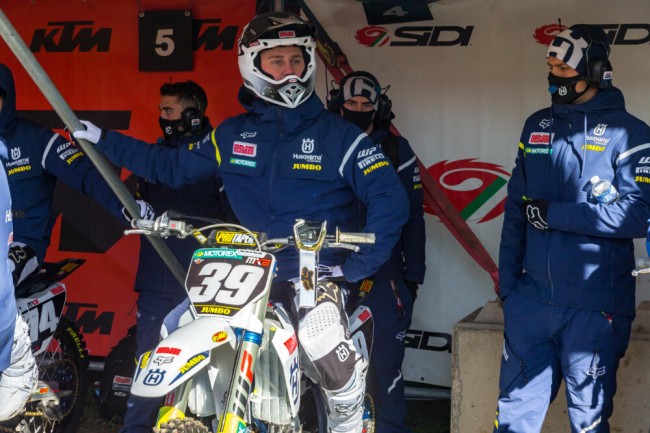 Securing a good gate pick via a fifth place in Saturday’s qualifying heat, Kay de Wolf was in good form when the first moto of the new season fired into life and started inside of the top four. De Wolf continued to get stronger as the race progressed on the rugged circuit, as he moved into third and rapidly closed in on the lead duo. Although he desperately tried to secure the runner-up position on the last lap of the first moto, he eventually settled for third place.

A mediocre start in the second moto made things difficult for de Wolf, who put his head down and charged up from the lower half of the top ten. Eventually making his way into fifth after a handful of laps, he settled for that position and secured a good number of points to start the season. Fourth overall was his eventual ranking at the Grand Prix of Great Britain. Four measly points separated him from a position on the overall podium.

Roan van de Moosdijk enjoyed a positive debut aboard his FC 250, as he showed superb pace all weekend. Running wide into some deep mud cost him a handful of positions in the first moto, as well as a better overall ranking. Salvaging sixth in moto one was an impressive showing though and he bettered that in the last moto; he started in fifth and progressed to fourth at the chequered flag. That 6-4 scorecard put him in fifth overall at the Grand Prix of Great Britain.

Standing Construct Husqvarna Factory Racing’s Brian Bogers enjoyed a positive start to his term aboard the FC 450. Continuing to get stronger as the event progressed, he showed good pace as he moved from ninth on lap one to seventh at the chequered flag in the opening moto. The second moto was trending in a similar direction, as he showed top-ten speed en route to twelfth. A 7-12 scorecard left him in tenth overall in the MXGP class.

Pauls Jonass is planning to join the Standing Construct Husqvarna Factory Racing squad at the second round of the 2022 FIM Motocross World Championship, the Grand Prix of Lombardia, on March 06. Jonass is recovering well from the surgery that he had on Monday.

Kay de Wolf: “The weekend was not too bad! I really enjoyed the first moto and was flowing well. I finished third. I had a really bad start in the second moto though, so had to work my way back up into fifth. We will get back to work and go again at Mantova.”

Roan van de Moosdijk: “It was a consistent weekend! I started the weekend quite well. I had a good start in the first moto, but got pushed wide in the second corner and had to fight back to sixth. I had a better start in the second moto and the first half was really good. We will come back a lot stronger next weekend.”

Brian Bogers: “I felt better on Sunday, compared to Saturday. I was seventh in the first moto and quite happy with that. It was a good way to start the season and something to build on! I finished twelfth in the second moto for tenth overall. I’m looking forward to the next race, because the feeling with the bike and team is really good.”